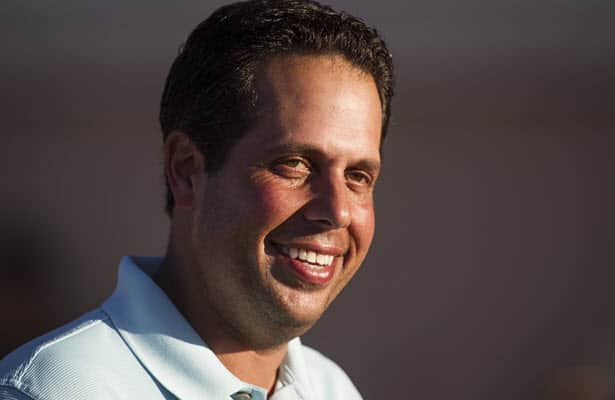 “It means a lot,” D’Amato said of the accomplishment Wednesday. “We have a really good team and it takes an honest effort day in and day out to get the results we’ve gotten. We’re just really proud of everyone and especially the horses and the owners that keep supplying me with nice horses to train.”

D’Amato, 46, served for a decade as an assistant to the late Mike Mitchell before taking over that operation in late 2013 and subsequently expanding. With Del Mar set to take over the Southern California racing scene on July 22, D’Amato shared the plans for several of his stable stars for this Horse Racing Nation Barn Tour.

Going Global and Going to Vegas. Both are exiting the May 30 Gamely (G1) at Santa Anita and have Del Mar stakes on the radar for this summer.

Going to Vegas, who previously was trained by Richard Baltas, was second in the Gamely. Grade 1 winner Going Global was the odds-on favorite and checked in third, a rare defeat on turf for the high-class 4-year-old. Her only previous loss in eight North American turf starts was last year’s San Clemente (G2) at Del Mar.

Next up for Going Global will be the Yellow Ribbon (G2) going 1 1/16 miles on grass on Aug. 13 at Del Mar. As for Going to Vegas, she has a two-race slate targeted.

“Going Global will be pointed to the Yellow Ribbon and we’ll just kind of take it race by race with her,” D’Amato said. “Going to Vegas we’re looking at the Mabee and then the Rodeo Drive, two races she ran in last year.”

For Elm Drive, who prior to the Great Lady M. returned from a seven-month layoff to win the May 8 Angel’s Flight, there are ambitious plans ahead.

“We’re going to send her to New York and try her in the Test,” D’Amato said of the Grade 1 going seven furlongs at Saratoga on Aug. 6.

Ain’t Easy, winner of last year’s Chandelier (G2), will get a break this summer to regroup, D'Amato said.

Desert Dawn. After finishing third in the Kentucky Oaks and the June 12 Summertime Oaks (G2) at Santa Anita, the Cupid filly is ticketed to take on older for the first time in the $400,000 Clement L. Hirsch (G1) at Del Mar going 1 1/16 miles on Aug. 6. The Hirsch is a “win and you’re in” for the Breeders’ Cup Distaff.

“I think distance-wise it’s good, and timing-wise it is good,” D’Amato said of the decision to face elders.

After winning the Santa Anita Oaks (G2) in the spring, Desert Dawn was beaten just 2 1/2 lengths at 50-1 when third in the Kentucky Oaks. In the Summertime Oaks, she stumbled at the break and was never in contention when being beaten 10 lengths by Under the Stars.

“She’s come back really good. As long as she gets a clean break I think she’ll be competitive,” D’Amato said of the Hirsch.

Leggs Galore. Sent east for the June 11 Just A Game (G1) at Belmont Park, the 5-year-old Bayern mare set a fast pace and faded to last of five. Prior to that effort, she reeled off three straight stakes wins, including the Buena Vista (G2) and Mizdirection at Santa Anita.

“Between the turf course she didn’t like and the pace scenario, which definitely didn’t help her, it was just one of those things,” D’Amato said of the Just A Game effort. “We took a shot in a Grade 1 and it didn’t work out. But she’s come back well.”

Next up for Leggs Galore will be a tilt in the $100,000 Daisycutter going five furlongs on grass at Del Mar on July 29.

Hong Kong Harry. The 5-year-old Irish-bred by Es Que Love is 3-for-3 this year, including a win most recently in the June 19 American Stakes (G3) on turf at Santa Anita. Previously, he won a pair of allowance races at the track.

“He’s just kind of steadily progressed, and the Read at a mile and an eighth should be nice for him,” D’Amato said. “After that we’ll look at something like the Del Mar Handicap.”