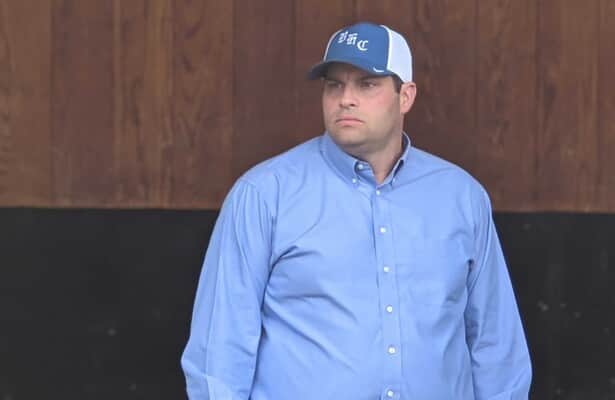 Start Breeders' Cup prep with the preps, get the Super Screener

Not so fast, his trainer Brad Cox said Saturday after his Gun Runner colt lost to another Gun Runner colt. Cyberknife finished third to Taiba in the Grade 1, $1 million Pennsylvania Derby.

“It’s possible,” Cox told reporters Saturday at Parx Racing. “We’ll look at that. That might be a better option. But we’ll let the dust settle and see what everyone else is doing, see how he comes out of it and go from there. You never know.”

Cox said Cyberknife put in a “good effort” but that “it’s a bad year to have a good horse.”

He also said Tawny Port, the three-time graded-stakes winner who came in 10th in the Penn Derby, would be getting “a little bit of a break.”

The reigning two-time Eclipse Award-winning trainer was more definitive last week at Churchill Downs discussing plans for other standouts in his stable. He was especially upbeat about a couple of 2-year-old prospects as he went over 14 other horses for this Horse Racing Nation Barn Tour.

Loggins. Bought last year for $460,000, this 2-year-old Ghostzapper colt lived up to his hype Sept. 17. That was when he won his debut by 8 1/2 lengths as a 4-5 favorite at Churchill Downs. “I thought he ran extremely well,” Cox said. “A very smart horse that does what’s asked of him. I was pretty happy with the way he came out of it. Once again he gave us a lot of reason to be excited. Some very nice figures out of the race.” His 89 Beyer Speed Figure, according to Daily Racing Form, was the fifth best for any 2-year-old going at least 6 1/2 furlongs in 2022. Where Loggins might get footloose and lure his rivals into their next danger zone remained to be determined. “I haven’t really zeroed in on anything,” Cox said. “I’m just going to kind of watch him over the next few weeks, probably breeze him back a time or two and then determine what we do. ... You could run him in the Breeders’ Futurity (G1, Oct. 8). That’s going to be asking a lot of him to try the Breeders’ Futurity and then the Breeders’ Cup (Juvenile). We’re trying to develop a horse, not just run to be running. We do think he’ll stretch. We’ll just come up with a game plan over the next few weeks.” With an ownership group led by Spendthrift Farm, there is no lack of ambition for Loggins. “Obviously our goal is to get to the Kentucky Derby,” Cox said. “Anytime you get a nice colt like this, that’s the goal. We don’t want to get in too big of a hurry. That’s the bottom line.”

Verifying. Cox made Grade 1 plans this weekend for the 2-year-old by Justify who was a $775,000 yearling. “Verifying will in the Champagne,” Cox said, referring to Saturday’s race that has been the proving ground for 23 Kentucky Derby winners but none since Super Saver going on 13 years ago. Normally held at Belmont Park, this year’s Champagne will be run at Aqueduct. Joel Rosario will ride Verifying, who is owned by Jonathan Poulin in partnership with Coolmore. The colt was a 1 3/4-length winner as an odds-on favorite making his debut Aug. 27 at Saratoga.

Giant Mischief. Another debut winner for Cox, this 2-year-old owned by Spendthrift Farm and its partners got off to a more modest start Thursday. He won as the 6-5 favorite in a 5 1/2-furlong maiden race at Horseshoe Indianapolis. Cox was not sure what the next assignment would be for the Into Mischief colt, who was bought as a yearling for $450,000. “Just get him back probably for a first-level allowance,” he said.

Shedaresthedevil. The three-time Grade 1 winner was unsuccessful in her defense of the Clement L. Hirsch (G1), finishing third last month at Del Mar. That did not discourage Cox from looking at another Grade 1 opportunity this fall for the 5-year-old Daredevil mare. “We nominated her to the Spinster (Oct. 9 at Keeneland),” he said. “We’ll see how that comes up. She’s doing well. She was going to breeze this weekend. We’ll see if that race makes sense. We’ll hopefully get her back to the Breeders’ Cup (Distaff). ... She needs to run well (in the Spinster), and we’ll see how it goes.”

Fulsome. Bred and owned by Juddmonte, the 4-year-old Into Mischief colt won last out in the West Virginia Governor’s (G3) on Aug. 6 at Mountaineer. “He’s doing really well. He’s training great,” Cox said. Now 4-for-5 in Grade 3 races, Fulsome could go that direction again Saturday at Churchill Downs, or he might try to break through in his third try at a higher class. “He’s nominated to the Ack Ack (G3) and the Lukas Classic (G2). We’ll make a decision here (this) week on which one we’re going to run in. That seems to be where he’s going to land in one of those races. There’s not a lot of options right now for him, but he’s doing well, training forwardly, and we’ll see.”

Set Piece. This Juddmonte homebred has seven stakes among his 23 victories. Three of those were graded, including the Baltimore-Washington International Turf Cup (G3) this month at Pimlico. Cox might have the 6-year-old Dansili gelding step up Oct. 8 to try to end an 0-for-5 Grade/Group 1 drought. “We’re pointing him for the (Keeneland Turf) Mile,” Cox said. “That’s one race we’re looking at. The Knickerbocker (G3) is the next day (at Aqueduct). Those are just races we’re going to nominate to. He seemed to bounce out of the race at Pimlico in good order. We’ll see how he trains over the next week or two. If we think it makes sense to take a swing at Keeneland, that’s what we’ll do.”

Chop Chop. A 2-for-2 start for this 2-year-old filly put her in the conversation for a graded-stakes assignment next out Oct. 7 at Keeneland. The question is whether she will stay on the turf, where she scored in her Ellis Park debut Aug. 14 and in the Kentucky Downs Juvenile Fillies on Sept. 3. “She’s going to possibly run in the Jessamine (G2),” Cox said, “or the Alcibiades (G1) on the dirt. She’s another one that’s already returned to the work tab. She’ll work in the next couple weeks. She’ll kind of tell us if she wants to try the dirt or not.” Chop Chop was bred to go to either surface. Her sire City of Light was a four-time Grade 1 winner on the dirt. She is out of an unraced broodmare by the late Giant’s Causeway, a six-time Group 1 winner on European turf who finished a close second to Tiznow at Churchill Downs in an iconic, 2000 renewal of the Breeders’ Cup Classic.

Turnerloose. Before she finished fourth in Saturday’s Seneca Overnight Stakes at Churchill, the 3-year-old Nyquist filly who won the Rachel Alexandra (G2) in the New Orleans winter already was being pointed to an Oct. 28 date at Keeneland. “We’re going to look at the Valley View (G3) with her,” Cox said. “She’s doing well. She didn’t run quite as well as we hoped in the (Dueling Ground Oaks, sixth place) at Kentucky Downs, but she did come out in good order. She’s had a work since, and we’ll point her for the Valley View.”

Caravel. It was a disappointing switch from turf to synthetic last Monday for this $500,000 sprinter. As an even-money favorite, the 5-year-old Mizzen Mast mare finished fourth in the Presque Isle Downs Masters (G2). “That didn’t quite work out as well as we’d like,” Cox said. “She did bounce out of it in good order. She shipped back here to Churchill.” Instead of doing any head hanging, Cox looked to a 5 1/2-furlong turf sprint against fillies and mares Oct. 16 at Keeneland. “We’re going to point for (the Franklin, G3). I think that’s the race that makes the most sense for her. It’d be back a little quick, but as long as she’s doing well, we’ll probably step up and try that.”

Adventuring. It has been a good comeback for the 4-year-old Pioneerof the Nile filly who spent eight months on the bench. She won the West Virginia Senate President’s Cup on Aug. 6 at Mountaineer before adding her first graded-stakes victory two weeks ago in the Ladies Marathon (G3) at Kentucky Downs. “She bounced out of that race in good shape,” Cox said. “She’s 2-for-2 this year. It was big with her pedigree and everything to get a graded-stakes win under her belt.” Next for the Godolphin homebred might be a visit to Canada. “We’re going to look at the E. P. Taylor (G1, Oct. 8) at Woodbine. That’s something we’re going to nominate to and also the Dowager (G3, Oct. 23) at Keeneland. That’s going 12 furlongs. She definitely likes the longer distances. It gives her an opportunity to be forwardly placed and finish up well. We’re very proud of what she’s been able to accomplish this year going back to racing.”

Best Actor. Gary and Mary West’s $330,000 colt is 5: 3-1-1, all since an April debut. His triumph in the Smarty Jones (G3) last month at Parx was the highlight of his year. Then came a third-place finish Sunday in the Oklahoma Derby (G3). Before that, Cox still was working on what might be next for the 3-year-old by Flatter. “He’s done really well,” he said. “We’re just going to avoid the Grade 1 horses for the time being. He’s a horse with a bright future. I think if he didn’t get away badly in the Indiana Derby, he’d be 4-for-4 (before the Oklahoma Derby), but it is what it is. We’re just bringing him along at a nice, easy pace. Hopefully at some point he can take swing at a Grade 1 in the future.”

Matareya. The winner of the Acorn (G1) had her four-race winning streak snapped Aug. 6. That was when the 3-year-old Pioneerof the Nile filly finished third in the Test (G1) at Saratoga. After nine races in 12 months, Cox gave the Godolphin homebred a break. “She was just given some time off after the Test. She’d had a long campaign. She’d raced and had no break. After the Test we just decided to give her a break. We’ll bring her back later this year or early next year and get her revved up. Hopefully, a filly that can compete at the Grade 1 level next year around one turn. A well-deserved rest, and she’s getting it right now.”

Interstatedaydream. The 3-year-old Classic Empire filly won the Black-Eyed Susan (G2) and Indiana Oaks (G3) before placing second last month as the 1-2 favorite in the Cathryn Sophia at Parx. “She’s getting a break,” Cox said. “We’re going to get her revved up for Oaklawn. I really didn’t like how she came out of the Cathryn Sophia (third place). She was just a little body-sore. Nothing major. No surgeries or anything required. We just thought we’d let her drop her head in some grass and be a horse for a while. We’ll freshen her up and have her ready for an Oaklawn campaign. We’re hopeful we can take a swing at some Grade 1s next year, maybe the Apple Blossom (G1, April 15). Obviously, she’s going to need some races prior to that, and I think they’ll come at Oaklawn.”

Caddo River. The 4-year-old Hard Spun colt who finished sixth in the Stephen Foster (G2) on July 2 has been on the bench since. “He’s just coming back into training,” Cox said. Still standing by for his first timed work since early summer, the one-time stakes winner and three-time allowance victor did not have a race targeted for his return.