Barn Tour: Could one of these 9 be Barclay Tagg's next star? 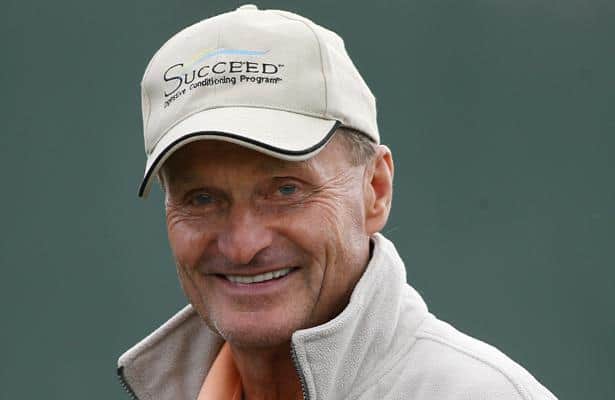 There is no question about trainer Barclay Tagg’s ability to find and develop an extraordinary horse.

He executed a shrewd private purchase on behalf of Sackatoga Stable when Funny Cide was acquired for $75,000, and the New York-bred gelding blossomed into the 2003 Kentucky Derby and Preakness winner. He also spotted New York-bred Tiz the Law for Sackatoga, and the Saratoga Springs-based partnership paid $110,000 for him. That turned into a tremendous bargain when Tiz the Law scored authoritative victories in last year’s Belmont Stakes and Travers (G1).

For the veteran Tagg, hope springs eternal that he can land another big horse. “That’s what you’re in the business for,” he said. “You keep searching.”

He believes the future is bright because of the presence of eight unraced 2-year-olds among the 21 horses in his barn at Saratoga Race Course. “I like them all,” he said. “Some of them are slower coming together. Some of them had physical problems when we got them.”

Tagg and indispensable assistant Robin Smullen are careful not to ask for too much too soon.

“If they’re precocious, I run them,” Tagg said. “If they’re not precocious, you just have to be careful with them, that’s all there is to it. You can’t make them do something they can’t do or you won’t get anywhere with them.”

Tagg offered Horse Racing Nation insight into some of his most promising runners:

Hombre. The Canadian-bred son of Tourist is being pointed toward the Aug. 22 Queen’s Plate at Woodbine even though he has won only one of three starts, all of them at 1 1/16 miles on turf this season. He comes off a fifth-place finish Saturday in an allowance optional claiming race at Saratoga. He has not been the luckiest. He battled shin problems last winter. He was belted leaving the gate in his April 24 debut at Belmont Park and had to be taken up by Kendrick Carmouche before he came flying late to finish fifth. He rebounded to break his maiden by 3 3/4 lengths on yielding turf on July 4 for owner Robert Cudney.

Nice enough to belong in the Queen’s Plate?

“I don’t want to demean the Queen’s Plate, but I don’t think it’s as tough as it usually is,” the trainer said. “I think it’s a good spot to run him, and the owners want to run him there.”

Doswell. This 6-year-old gelded son of Giant’s Causeway represents the kind of project Tagg tends to excel at. Breeder-owner Joseph Allen took a shot at that when he assigned the horse to Tagg after five races produced four second-place finishes. Doswell rattled off consecutive wins for his new outfit before placing second in the Dec. 12 Fort Lauderdale (G2) and third in the Jan. 23 W.L. McKnight (G3), both at Gulfstream Park. The lightly raced veteran has since been sidelined by the combination of a troublesome sprained ankle and foot problems. “If we get him back, he’s going to be all right,” Tagg said. He hopes that a change in blacksmith and new shoes might lead to a start at the end of September.

Step Dancer. Fans will not have to wait long to see whether Step Dancer can take the next step after he finished second in a New York Stallion Stakes event June 19 at Belmont Park. He is entered in another New York Stallion Stakes race Wednesday at Saratoga. The War Front colt flashed ability at 2 when he took third in the Pilgrim (G2) last October. “He’s a good-looking horse; nice and sound, knock on wood,” Tagg said. The earner of $137,300 through six starts is owned by Donna and Hayward Pressman and Diamond M Stable and loves to go long.

Saratoga Flash. This 3-year-old is one of seven Sackatoga runners in Barn 15 at Saratoga. He is being prepared for a mid-August allowance at Saratoga. He broke his maiden at six furlongs on the turf in his fourth attempt at a maiden special weight. Last out the New York-bred snagged third at the allowance level, going seven furlongs on the turf July 10. Said Tagg, “He’s coming around nicely.”

Tapple Cider. After going unraced as a juvenile for Sackatoga, this 3-year-old daughter of 2014 Belmont Stakes winner Tonalist has been something of an exercise in frustration while finishing fourth in each of her three starts. But that does not begin to tell the story. The connections are eager to see her on turf but her last two races, the most recent on Monday, have come off the grass because of heavy rain. They will look to take another crack at it during the meet. Jack Knowlton, who manages Sackatoga, stepped up by spending $290,000 to bring home Tapple Cider from the 2020 Fasig-Tipton Midlantic 2-Year-Olds in Training Sale.

North Carolina. Allen transferred the 4-year-old Speightstown colt to Tagg with the hope that he might follow Doswell’s path. The lanky North Carolina made one start all of last season for Hall of Famer Shug McGaughey, lagging in seventh in a maiden special weight event in late June at Belmont Park. He is now making steady progress toward a Saratoga start, ideally at 1 1/6 miles on the turf, after arriving at the barn in mid-July. “He is a nice mover,” Tagg said. “There is a lot to like about him.”

Cupere. Owner David Stack spent $110,000 to obtain her as a yearling. She is unraced at 2 as Tagg makes sure to bide his time with this good-looking April 15 foal. Tagg said, “She’s a lovely filly and we really like her. She hasn’t done anything wrong.” Cupere drilled four furlongs in 49.55 seconds on Monday at Saratoga.

Money Merger. This juvenile son of Central Banker, who stands at McMahon of Saratoga Thoroughbreds as New York’s leading sire, joined the barn in Florida in March only to be set back by a fever. Look for him to debut in August at the Spa. Sackatoga paid $70,000 to acquire him as a yearling at Fasig-Tipton’s Midlantic Eastern Fall Yearling Sale.

Tiz Eternal. His sire, Tiznow, remains the only two-time winner of the Breeders’ Cup Classic. It remains to be seen how much of Tiznow’s talent was passed on. Tiz Eternal is following after his father with his exceptional size and ability to cover ground. This New York-bred is still putting it all together. His first start might be delayed until Belmont’s fall meet. He drilled four furlongs out of the gate in 49.44 seconds on Tuesday, according to Equibase. That matched the time of more precocious stablemate Money Merger.

Tagg and Smullen emphasized that all of their 2-year-olds are very much works in progress.

“They change all the time,” Smullen said. “Every work changes them.”