Barn Tour: Shug on Code of Honor, Greatest Honour & others 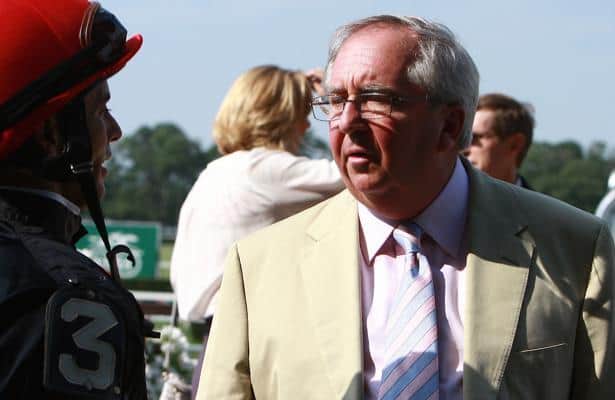 With both Code of Honor and Greatest Honour on the mend, and unbeaten sophomore First Captain poised for his stakes debut, trainer Claude “Shug” McGaughey appears primed for a big second half of the season.

The Hall of Fame conditioner, who through Wednesday had 23 winners from 134 starters and earnings of nearly $1.9 million on the year, shared what might be in store for several of his stable stars in this latest Horse Racing Nation Barn Tour.

Code of Honor. The multiple Grade 1 winner has been out of sight since running an even fifth in the Pegasus World Cup (G1) in January. He was sent to Ocala, Fla., for rest and relaxation following that effort, but in recent weeks the William S. Farish homebred has been ramping up his training and is almost ready for a timed workout.

“We gave him a good, solid 60 to 90 days off after the Pegasus,” McGaughey said. “He’s back galloping and is due for a breeze likely in the next week or so.”

“He’s one I’m definitely hoping that if everything goes to plan, we’ll have him ready for Saratoga,” McGaughey said.

Greatest Honour. Among the early Kentucky Derby favorites after wins in the Holy Bull (G3) and Fountain of Youth (G2), the Tapit colt has been sidelined since a third-place finish in the Florida Derby (G1) in late March.

“He’s turned out in Florida and is doing fine,” McGaughey said. “We just had to give him a little time for some bone remodeling. You hate to lose one at that time of year, but I think the time off will do some good.”

He added it is unlikely Greatest Honour will run at Saratoga.

“I hope to get him back by Saratoga, but it will likely be more Belmont (fall meet) before he runs,” McGaughey said.

First Captain. After winning his bow at Belmont Park in late April, he came back a month later with a determined victory against allowance foes going a mile at Belmont Park. In the allowance, First Captain was overtaken for the lead in the stretch, but then battled back gamely to win by a length as the even-money favorite.

He is scheduled to make his next start in the restricted Curlin Stakes going 1 1/8 miles at Saratoga on July 30.

“He’s an easy horse, does everything in his training like you want,” McGaughey said. “He’s a little bit behind right now, having run just two times. But I thought his race was really good the other day. He got headed and then came back to beat a pretty good horse. I think he’ll learn a lot from that. We are looking forward to the future.”

Alandra. Grade 1-placed as a juvenile, the 4-year-old daughter of Blame has yet to gain much traction in subsequent seasons, particularly against stakes company. Alandra heightened hopes when drawing off to win a May 15 allowance at Belmont Park in her second start of the year, but then came back to turn in a dud in the Bed o’ Roses (G2) when finishing last by nearly 25 lengths. That effort came over a sealed and sloppy track.

“She came back fine, but I don’t know what happened,” McGaughey said. “I’m going to blame it on the track. But I don’t know. She’s kind of a funny filly. Her poor races have been in stakes, but all her other races she runs good. We’ll just regroup and try and figure it out.”

Third Draft. The 3-year-old Curlin filly earned her diploma May 8 at Belmont Park when going 1 1/16 miles on grass. It was the kind of effort to leave the trainer thinking that bigger and better could lie ahead.

“I like her a lot,” McGaughey said. “I’d like to find an allowance race going a mile and an eighth. I think she wants to run a little farther. I’m kind of taking my time. I think her future is in front of her and I don’t want to overcook her right now.

“But saying that, she could also be a candidate for the Belmont Oaks,” he added.

Top Seed. After running fourth in the May 1 Westchester (G3) at Belmont Park, he came back 27 days later to be beaten just a length by undefeated Grade 1 winner Happy Saver in a one-mile allowance at Belmont.

“I was very pleased with that effort, I thought he really ran hard,” McGaughey said. “He seemed to come out of it well. He’ll probably have a little breeze this weekend. I’d like to find something maybe a little shorter for him.”

Would that be in a stakes?

“If the right one came up,” McGaughey said. “Otherwise we’ll look for an allowance.”

Scarlett Sky. Winner of the Transylvania (G3) at Keeneland in early April, he came back to be a disappointing ninth as the second choice in the American Turf (G2) on Kentucky Derby day at Churchill Downs. The Sky Mesa sophomore is now in the midst of a two-month break.

“He came out of that a little banged up, and he’s turned out now for 60 days,” McGaughey said.

Bears Watching. He certainly did bear watching when rolling to a 7 3/4-length maiden win in his second start at Gulfstream Park in March. However, the 3-year-old Karakonite colt emerged from the race with a physical problem that has left him sidelined in the interim.

McGaughey is hoping Bears Watching will return this summer.

“He had a little chip in his ankle and we took it out,” McGaughey said. “But he’s back training at Blackwood (Stables) in Kentucky. He’s a nice horse. I think he’ll run at Saratoga.”