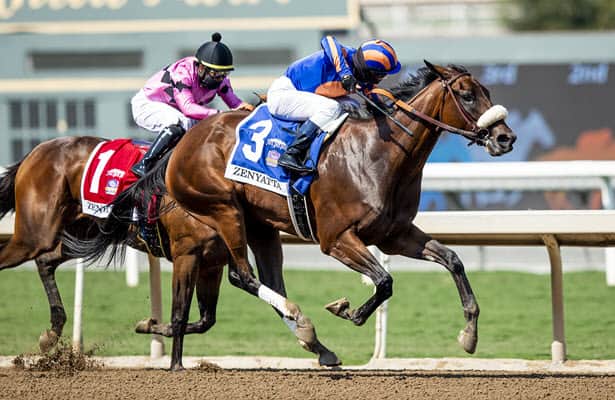 Since arriving in Southern California from Great Britain in late 2009, Simon Callaghan has emerged as one of the leading trainers on the circuit. Aiding in that decade-plus development has been a pipeline of well-bred horses forged through alliances with some of the most prominent owners in the sport.

Callaghan’s stable has surpassed $2 million in earnings in five of the past six seasons with a high of $2,922,914 reached in 2019 with just 129 starters -- a cool $22,658 per start. The bankroll earned a significant boost when both Donna Veloce and Bellafina finished second in their respective Breeders’ Cup races. The 37-year-old trainer -- still seeking a first win in a Breeders' Cup race or American classic -- will look to build on his growing resume in 2021.

Callaghan this week provided HRN with updates on several of his stable’s notable runners and what could be in store this season.

The 4-year-old daughter of Uncle Mo rocketed to stardom last season for owner-breeder Alice Bamford and partner Michael Tabor. After breaking her maiden at Los Alamitos in July, Harvest Moon reeled off wins in an allowance followed by the Torrey Pines (G3) at Del Mar and Zenyatta (G2) at Santa Anita. She capped off the productive campaign with a solid fourth in the Breeders’ Cup Distaff in her first start outside of California.

Harvest Moon has been working steadily at Santa Anita since Jan. 10. Callaghan said she has come back as “a more mature filly’” and will kick off the season in the $300,000 Beholder Mile (G1) at Santa Anita on March 10.

“She obviously did a lot in a short course of time as a 3-year-old,” Callaghan said.  “To go from a maiden win in the summer to the Breeders’ Cup was a pretty quick rise in the ranks.”

Callaghan would go on to expand on the the qualities of Harvest Moon.

“She’s got a lot of natural speed and a great cruising speed,” Callaghan said. “That’s the one thing about her, she has this stride that is kind of effortless and is able to put herself in position in the race. Tactically, she’s pretty easy.”

The stoutly-bred colt for Don Alberto Stable and Qatar Racing has emerged as an upper-echelon 3-year-old on the Southern California circuit. By Empire Maker out of the Bernardini mare Spare Change, Roman Centurian followed a Jan. 3 maiden win at Santa Anita by being beaten just neck by Medina Spirit in the Jan. 30 Robert B. Lewis.

“Obviously, we thought his maiden win was a good one and we felt he was a very legit horse,” Callaghan said. “But that was a real step up. He showed that he can run against some of the better 3-year-olds that had more seasoning, such as Medina Spirit. That’s what we liked to see. We hope he can progress more over the next couple months. That’s what the pedigree says he can do.”

“We’ve got him nominated for everything, but at this stage it’s likely we’ll stay here and run in the San Felipe. But that’s something that could change,” he noted.

Madone just recently returned to Callaghan after a winter break and has yet to work.

Callaghan figures to go Grade 1 hunting this season with the 5-year-old daughter of Vancouver (Aus), who is also owned by Shah. Last year, she won the Goldikova (G2) at Santa Anita and was second in the Rodeo Drive (G1) prior to an off-the-board finish in the Nov. 29 Matriarch (G1) to conclude the campaign.

Following a 30-day freshening at the farm, Maxim Rate has worked three times for her seasonal bow.

“She’s doing great,” Callaghan said, adding she could kick off the campaign in April at Keeneland, likely the Jenny Wiley (G1).

“We could do a little shipping with her,” Callaghan said. “With these fillies, it’s trying to establish a Grade 1 win. I think with this filly, she’s late maturing. She didn’t run as a 2-year-old and I think she’s only going to get better. Again, she’s come back bigger and stronger. I think this could be her best year yet."

While still a maiden, this is another 3-year-old with classic aspirations for Callaghan. He was a solid second behind the highly-regarded Concert Tour on debut Jan. 15, and then after scratching from last Saturday’s San Vicente (G2), was a troubled third behind the ultra-impressive Dream Shake a day later in a Santa Anita maiden race.

Callaghan said he was happy with the last effort given the trouble, which included stumbling out of the gate and getting “knocked,” according to the chart, before rushing up along the inside. Mr. Impossible would chase leader Concert Tour throughout before being beaten 3 ½ lengths while eight lengths clear of third.

“It was a pretty good effort considering he stumbled and had to be rushed up,” Callaghan said. “He still managed to stay on while the other horses faded, so I think it was a better-than-looked effort.”

“What we’ll probably do is stretch him out and see what doors that may open,” he said.

A Group 1 winner in her native Chile for breeder Don Alberto Stable, the 5-year-old mare was beaten less than two lengths in the Jan. 18 Megahertz Stakes (G2) at Santa Anita in her North American debut. However, she was disqualified for interference in the stretch and moved down to fourth. The Megahertz was her first start in more than 10 months.

“I think it was a good effort -- first time going left-handed and first time in this country,” Callaghan said. “The winner (Mucho Unusual) is a very tough mare in that division. I think she can build on it and is a filly that can run in those kinds of races regularly.”

Callaghan said the LNJ Foxwoods' color-bearer -- winner of the $400,000 Music City Stakes at Kentucky Downs last September -- will be entered in Monday's $75,000 Wishing Well Stakes sprinting on the grass at Santa Anita. Most recently, the 4-year-old daughter of Mizzen Mast crossed the wire third in the Jan. 9 Las Cienegas (G3) at Santa Anita, but was disqualified to fifth.

Callaghan also has looming in the barn this 3-year-old colt, who was a $1.2 million purchase at the 2019 Keeneland September yearling sale by Ben McElroy, agent. Bred by Stonestreet, he is by top sire Medaglia d'Oro out of the graded-stakes winner Keen Pauline, by Pulpit. He has two three-furlong drills at Santa Anita on the tab, with the most recent completed in :36.0.

"He’s still got a little ways to go, but he’s a nice colt," Callaghan said. "Getting up to half miles."

Favored Olympiad powers to victory in the Stephen Foster
Olympiad  tracked a quick pace, grabbed the lead a...

Life Is Good draws off to win the John A. Nerud
Elmont, N.Y. Trainer Todd Pletcher was every bit a...

Charge It dominates with 23-length win in Belmont's Dwyer
Charge It made amends for his last out 17th-place...

4 superfecta keys Saturday at Churchill Downs
For me, one main attraction to superfectas is that...
x