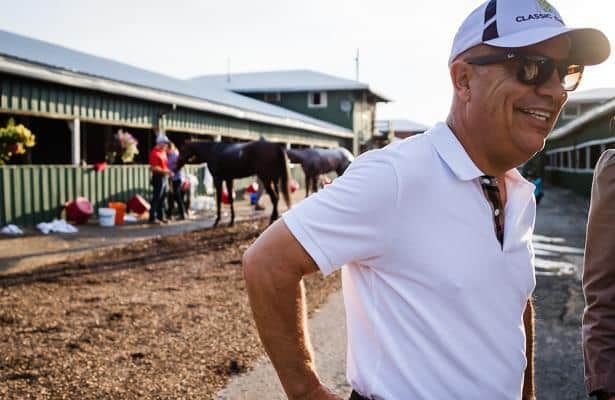 Hall of Fame trainer Mark Casse was not thrilled with how his 2020 went.

“I was disappointed with a lot of our performances, especially in the Breeders’ Cup,” Casse said. “If you look at it overall, we had a really strong meet at Woodbine. The problem was at Woodbine, they had so much less racing. We started late and they shut it down early.”

Going into 2021, Casse said he feels lucky to be in the horse industry, which he noted was not hit as hard by the pandemic as other businesses.

“We’re one of the fortunate ones,” Casse said. “Hopefully restaurants and everybody can get back to normal soon.”

As a way of previewing the year to come, Casse provided a status report on some of the older stars in his stable.

Got Stormy — One of Casse’s biggest stars of the past two years has been Got Stormy, now a 6-year-old, who last year tallied a pair of Grade 3 wins in the Franklin County at Keeneland and the Kentucky Downs Ladies Sprint. She also finished second in the Fourstardave (G1) at Saratoga, a race she won in 2019.

After finishing fifth in the Breeders' Cup Turf Sprint to close out the year, owner Gary Barber offered Got Stormy at the Keeneland November mixed sale. She commanded a final price of $2.75 million from Spendthrift Farm, which the stunned the racing world by announcing she would race for another year rather than be bred.

Got Stormy returned to the worktab earlier this month and is being pointed to the $125,000 Honey Fox Stakes (G3) on Feb. 27 at Gulfstream.

“She breezed (Wednesday),” Casse said of the Get Stormy mare. “She went a half mile at our training center. She’s looking good.”

Skywire — The 5-year-old gelding was a multiple Grade 2 winner on the Polytrack at Woodbine last year and most recently was seventh in the Dec. 31 Prarie Bayou over the Turfway Park synthetic main track.

“I ran him at Turfway and he kind of didn’t run his race,” Casse said. “He’s still at Turfway, I’ll probably run him back there.”

March to the Arch — The 6-year-old gelding has been off since a 13th-place finish in the Breeders’ Cup Mile on Nov. 7. Earlier in the year he scored victories in the King Edward (G2) at Woodbine and the Sunshine Millions Turf at Gulfstream.

“He got a little break as a lot of the Live Oak (Plantation) horses do for the winter,” Casse said. “He’ll come back and I don’t know whether he’ll get a start this winter or we’ll just wait. He loves the Woodbine turf course so we’re going to concentrate on some of those races up there.”

Enforceable — The Tapit colt started 2020 by winning Fair Grounds' Lecomte Stakes (G3) and eventually found his way to the Kentucky Derby starting gates, finishing seventh. In his most recent race, an allowance at Fair Grounds, he finished third and the 4-year-old is scheduled to run in another such event Sunday.

“He’s doing well,” Casse said. “He’s been disappointing. I’ve been waiting for him to hopefully get it all together here soon. He’s training well.”

Ride A Comet — The now 6-year-old is off to a hot start in 2020, winning the Tropical Turf (G3). He was invited to the $1 million Pegasus World Cup Turf Invitational (G1) on Jan. 23 but Casse said he will not be running.

Lady Grace — The winner of the July 18 Royal North (G2) at Woodbine, 5-year-old Lady Grace finished seventh over the same course three months ago in the Nearctic Stakes (G2).

Chart — Winner of the Aug. 29 Ontario Colleen (G3) on the turf at Woodbine, Chart finished 10th last time out at Pimlico in the Hilltop Stakes on Oct. 3. Casse said the 4-year-old filly is back to work.

“She’ll maybe get a start in March,” Casse said. “Just all over the place for her. She likes the grass, she likes it firm. So certain plan for her, just kind of seeing how things go.”

Tap It to Win — The 4-year-old allowance winner who finished third most recently in the Pat Day Mile (G2) at Churchill Downs is set to return in the near future, according to Casse. He also notched finishes last year of fifth in the Belmont Stakes and second in Saratoga's H. Allen Jerkens Stakes (G1).

“He’s a pretty good horse,” Casse said. “We gave him a break and he’s coming back, I think he’s probably going to run in February or March.”

Salute with Honor — Casse briefly touched on the 7-year-old, who won the Durham Cup (G3) at Woodbine on Oct. 10 before finishing fifth one month later in the Autumn (G2).