Barn Tour: Check out the latest on Mark Casse's stars 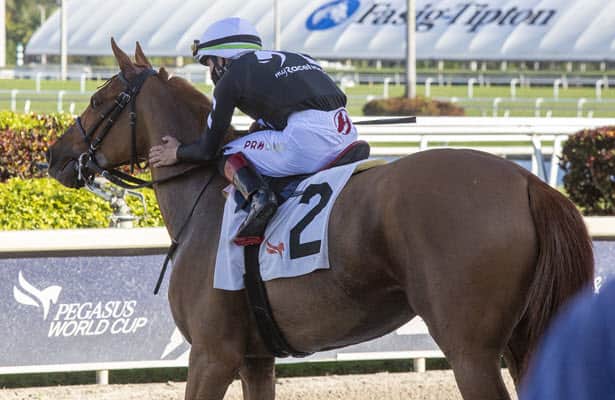 Hall of Fame Trainer Mark Casse watched one of the stars of his stable, Got Stormy earn a victory on Saturday in the Honey Fox (G3), her 6-year-old bow. He also had seemingly won the Herecomesthebride (G3) with Spanish Loveaffair before a controversial disqualification moved her to fourth.

On Wednesday, Casse updated HRN on these two and other top horses in his stable.

Casse said the mare came out of her photo-finish win in the Honey Fox “great” and that she likely will wait until Kentucky Derby Day for her next start, which would be in the Distaff Turf Mile (G2). After that, he plans to send Got Stormy to Belmont.

The mare was sold after the Breeders' Cup for $2.75 million to My Racehorse and Spendthrift Farm, and Casse did not expect to be training her for 2021. He said her return for a 6-year-old season has been a pleasant surprise.

“I feel very lucky to get to have her for another year,” Casse said. “I thought watching the sale, I knew what the reserve was and when she went above it, I thought ‘well, it was a great ride.” And then to get her back is amazing.”

After a disappointing end to the 2020 season, Casse sent the 2019 Belmont winner to the farm in hopes he would be able to recover, with retirement as an option.

The 5-year-old will have to wait another year before going to the shed, as Casse said he will be back in action for 2021. There is no set-in-stone plan for Sir Winston, but Casse could send him back to where he earned his first win in 2018.

One of Casse’s top 3-year-old colts, this son of Nyquist ran third on Saturday in the Battaglia Memorial at Turfway Park. Casse praised the trip and said he plans to Keep Gretzky the Great at Turfway for the track’s next Kentucky Derby prep race, the Jeff Ruby Steaks (G3) on March 27.

“I thought he ran well,” Casse said. “He missed a lot of time after the Breeders’ Cup, so it was kind of a rush job to get him there.”

After crossing the wire first in the Herecomesthebride (G3) on Saturday, the filly was disqualified. Casse said he has made the rare move of appealing the DQ, as he felt the interference was not his filly’s fault.

“The inside filly shied from the rail poking out a little bit,” Casse said. “She kind of hip checks our filly a little bit, the natural physics are, it’s going to drive our filly in and that’s what happened. I think it’s unfortunate, and I think when the dust clears we’re going to have a good chance to overrule that.”

Casse said the trip was what he expected for Spanish Loveaffair, who finished sixth in the Breeders’ Cup Juvenile Fillies Turf to end 2020.

“We were expecting big things out of her,” Casse said. “Our thoughts and our feelings were that she’d really blossom from 2 to 3.”

The Suncoast Stakes winner came back on three weeks rest for the Davona Dale (G3), finishing fifth in a race won by 50-1 long shot Wholebodemeister. Undeterred by what he called a “kind of crazy” race, Casse plans to keep the filly on the Kentucky Oaks trail.

He had planned to run Curlin’s Catch in the April 3 Ashland (G1) at Keeneland, but Casse said he now is leaning toward sending her to the Gazelle (G2) at Aqueduct the same day.

“I think she’s a filly that wants to settle,” Casse said. “... When you run at Gulfstream you pretty well have to be up close to the pace, so all the riders know that and they ride that way. I don’t think that’s really what she wants.”

Winner of the Tropical Turf at Gulfstream in his last race, the 6-year-old son of Candy Ride is entered in Saturday’s Frank E. Kilroe Mile (G1) at Santa Anita. Casse has high hopes for the race.

“I think he’s probably as good a turf horse as there is right now in North America,” Casse said. “That’s why we’re there to prove it, so we’ll see. That horse is an amazing horse.”

Winner of the Display Stakes at Woodbine in his most recent trip on Oct. 18, the Ironicus colt will make his 3-year-old bow in the Tampa Bay Derby (G2) on Saturday. The race will be his first time running on dirt.

Another up-and-comer for Casse is this 3-year-old son of Into Mischief, who has won both of his starts so far. Casse said Soup and Sandwich will make his stakes debut in the March 27 Florida Derby (G1).

“I think with his speed he’ll be forwardly placed in the Florida Derby,” Casse said. “We can kind of sit at home and figure out where we fit in this big picture and so far, so good.”