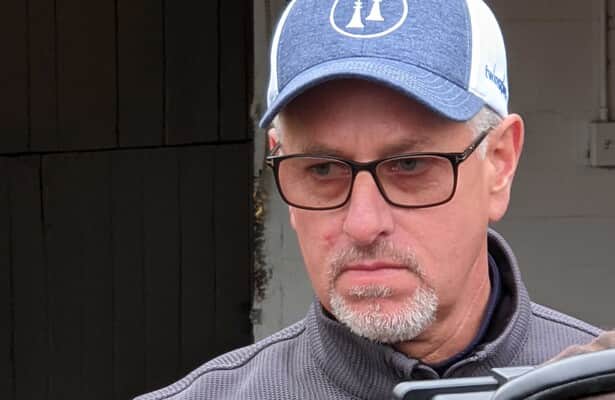 Todd Pletcher, winner of a record seven Eclipse Awards as North America’s leading trainer, is closing yet another strong season. According to Equibase, he ranked fourth nationally with $20,225,861 in earnings through Monday. His horses had won at a 21 percent clip with 179 victories from 849 starts.

The newly minted Hall of Famer has shown the ability to use late-season juvenile races at chilly Aqueduct as a springboard to grander accomplishments the following season. Multiple Grade 1 winner Malathaat parlayed a Demoiselle (G2) victory into 3-year-old stardom. Known Agenda, third in last December’s Remsen (G2), went on to capture this year’s Florida Derby.

“They’ve proven to be successful avenues for us to follow,” Pletcher said.

He again has the horsepower to finish the season with a flourish. He took Horse Racing Nation on a Barn Tour that primarily focuses on Cigar Mile day Saturday at Aqueduct.

Americanrevolution. A victory in the Cigar Mile Handicap (G1) could signal that this New York-bred Constitution colt, co-owned by CHC and WinStar Farm, is ready to emerge as one of the nation’s leading older horses in 2020. He broke his maiden at first asking, but it did not come until June 20 at Belmont Park. Interestingly, he was limited primarily to state-bred competition while winning 4 of 5 starts. He dominated the New York Derby, Albany Stakes and Empire Classic Handicap by a combined 24 lengths.

“I just thought it was prudent to take advantage of the fact that he is a New York-bred,” Pletcher said. “There are some lucrative purses to run at. Certainly, he’s proven that he’s an open caliber horse. We just figured that was the smart way to manage him at the time.”

He was pleased with Americanrevolution’s third-place effort behind Hot Rod Charlie and Midnight Bourbon in the Sept. 25 Pennsylvania Derby (G1).

“We were giving up a lot of seasoning in that race,” Pletcher said. “Obviously, there were some of the best 3-year-olds in the country, and we had just broken our maiden several months before that while they were on the Triple Crown series.”

Look for a more ambitious campaign in 2022.

“He seems like a horse that just keeps improving,” Pletcher said.

Following Sea. The connections hope this Runhappy colt, unraced last year at 2, will use the Cigar Mile to rebound from his misadventures during a third-place finish in the Breeders’ Cup Sprint. His poor luck began even before the gate snapped open when he and jockey John Velazquez drew the rail.

“He put himself into a good spot, and there was a brief moment when there was an opening inside at the quarter pole. He tried to make a run in there and the door closed. Johnny had to steady at a critical point in the race,” Pletcher noted. “Johnny felt it cost him the win. You can never be positive, but those were his feelings.”

Following Sea, bred and owned by Spendthrift Farm, owns three wins and has never been off the board in seven starts for earnings of $693,020.

“He is training very well and came out of it with good energy,” Pletcher said. “He’s always given us the impression that a mile would be well within his range.”

Mo Donegal. Donegal Racing, in its incessant search for horses that can compete in the classics, spent $250,000 on this son of Uncle Mo at Keeneland’s September Yearling Sale. Saturday’s Remsen Stakes should give them a better reading on how they fared.

The juvenile came in third in his debut, going 6 1/2 furlongs Sept. 30 at Belmont Park. He welcomed the step up to 1 1/16 miles to win his only other start, Oct. 21 at Belmont, going wide around the turn for a driving victory under Irad Ortiz Jr.’s strong handling.

Mo Donegal started slowly in both of his races. “He’s not real quick away from the gate,” Pletcher acknowledged. “We always felt added distance would be to his advantage. That’s what we saw in his second start, so we’re looking forward to the mile-and-an-eighth.”

Overstep. This well-regarded New York-bred by Into Mischief, purchased for $360,000 by Repole Stable and St. Elias Stable at Keeneland’s September Yearling Sale, will oppose open company for the first time in the Remsen. He was a geared-down 6 3/4-length victor when he launched his career Sept. 25 going six furlongs at Belmont Park. He placed second in the Sleepy Hollow Stakes in his only other effort.

“His second start was a quality race. It was unfortunate he drew the ‘1’ hole with a sloppy track, and he was a little bit inexperienced,” Pletcher noted. “I thought overall it was a good effort, and he will continue to improve with added ground.”

Nest. The 1 1/8 miles of Saturday’s Demoiselle will certainly not be an issue for this daughter of two-time Horse of the Year Curlin. She won at first asking going 1 1/16 miles before a mile did not allow enough time for her powerful closing kick in her second start, on Nov. 5.

“We don’t often start horses at a mile-and-a-sixteenth in their debut, but we knew that is what she wanted to do,” Pletcher said. “She was good enough to win her first time out, and she kind of ran out of ground in the Tempted. With the added eighth of a mile, it’s going to be to her liking.”

Nest represents yet another hefty-ticket horse that adorns the shedrow. Michael House, Eclipse Thoroughbred Partners and Repole Stable acquired her for $350,000.

Life Is Good. The dominant Dirt Mile winner headed to WinStar Farm for some rest and relaxation after the Breeders’ Cup. He is scheduled for a light, three-furlong breeze this week at WinStar before he joins Pletcher’s string in South Florida to begin preparations in earnest for the $3 million Pegasus World Cup Invitational (G1) on Jan. 29 and a highly anticipated clash with Classic winner Knicks Go.

Commandperformance. Although this son of 2012 Belmont Stakes winner Union Rags did not reach the winner’s circle in three tries as a juvenile, Pletcher is eager to get on the Triple Crown trail with him.

“I think Commandperformance’s fourth-place finish in the Breeders’ Cup was better than it looked so we have high hopes for him,” the conditioner said.

Before the Juvenile, Commandperformance was second to Jack Christopher in the Champagne (G1). He will head to South Florida after a freshening in Kentucky.