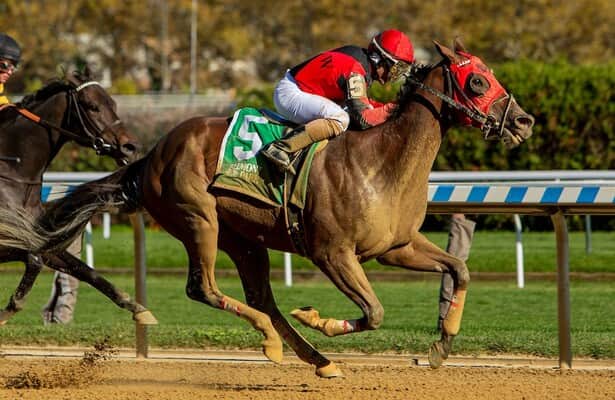 If you knew only one thing about trainer Lynn Cash, it’s probably that he trains Beverly Park, a 5-year-old son of Munnings who has had 28 starts in 2022 and won his 13th race of the year on Monday.

Get Paddock Prince picks for Aqueduct

But that’s not the only thing remarkable about the 58-year-old trainer, who just got his first graded-stakes win with Double Crown in the Kelso (G2) and who entered two in Saturday’s Cigar Mile Handicap (G1) at Aqueduct.

A longtime roofing contractor who had owned about seven or eight racehorses, he and his wife moved to a farm in Midway, Ky., about eight years ago to be closer to the action. Then last year, he decided that he should train his horses himself, so he took out a training license and started claiming horses with his wife, Lola.

A lot of horses. In addition to yearlings, weanlings and horses getting a break, they now have about 45 to 50 racing, stabled mostly at the Thoroughbred Center in Lexington, Ky., and at Laurel Park.

“That was probably the one difference between the past as an owner, where I bought at auction,” Cash told Horse Racing Nation this week. “Now as a trainer-owner, we claimed horses – and we've had some amazing claims.”

Cash doesn’t train any horses whom he doesn’t own, which means a much different kind of accountability than most other trainers face.

“It has been nice because it's allowed me some leeway to make decisions without worrying about repercussions,” Cash said. “Sometimes we race on a little shorter rest than most trainers do. We get them back in.”

The records show that Cash does, indeed, race his horses quite often.

“Typically, I think the perfect day is about 12 days,” he said. “But sometimes the races that you want to be in, they're coming up to be on nine days rest or 19 days rest. You don't always get the perfect day, and when I have that choice, I race on nine days rest instead of waiting for 19 days – of course, as long as the horse is sound. I'm talking about good, sound horses that they just have to rest and recuperate and rejuvenate before they race again.”

Cash talked about some of his top horses for the latest in HRN’s Barn Tour series. For more on Beverly Park, click here.

Double Crown. Claimed by Cash for $40,000 after a second-place finish in a Churchill Downs race in June, he’s one of two whom Cash entered in the Cigar Mile. The 5-year-old gelded son of Bourbon Courage beat Baby Yoda to win the Kelso at 42-1 odds off a fourth-place finish in the Maryland Millions Classic. After “he just didn't get the trip that we'd hoped for” in the Maryland Millions, Cash said, he debated whether to run him in the Kelso. The win “was absolutely a surprise.”

“Apparently that was a pretty fast pace even though it was a 24-second first, I think it was 24 and 47, maybe it was 48 at Aqueduct the first two quarters. (Actually, 24.32 and 48.60 seconds.) But the way he rolled down the lane, and Baby Yoda was coming back to us a little bit and the other horses. It must have been a stronger pace than I realized going in, but this was totally unexpected, I can assure you.”

Outlier. Cash’s other entrant in the Cigar Mile, Cash claimed the 4-year-old gelded son of Not This Time a year ago at Churchill Downs for $50,000, and he has won three of 21 starts since. “He’s kind of a front runner,” Cash said.

Plot the Dots. Cash said Tuesday that he expected to enter the 5-year-old gelded son of Uncle Mo in the Cigar Mile, bit that didn't happen. Cash claimed him at Laurel Park for $40,000 on Oct. 13. He finished fifth in his next race and won the next one, an allowance optional claiming race, also at Laurel.

Sir Alfred James. The 6-year-old gelded son of Munnings was claimed for $62,500 after a win at Churchill Downs in September 2021. He has a record of 16: 4-1-1 and is getting a freshening after finishing seventh last out in the Phoenix (G2) last month.

Eastern Bay. Claimed in April for $35,000, the 8-year-old son of E Dubai was a nose short of winning the Bold Ruler (G3) last out and ran second in the Vosburgh (G2). Cash expects him to come back in a sprint at Aqueduct or Laurel Park.