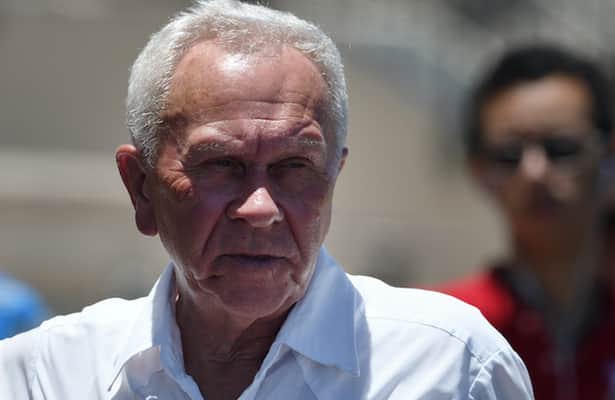 Gerald Bennett has been the man to beat at Tampa Bay Downs lately, winning the training title eight years running.

But to hear him tell it, the 2022-23 meet, which begins Wednesday, might be a different story. “We’ll have to see how we can rebuild,” he told Horse Racing Nation Tuesday.
Click here for details of the Tampa Bay Downs meet.

“They claimed a lot of horses off us in Monmouth,” he said. With about 38 horses, “we're much lower on stock than we've ever been.”

And Bennett expects the meet to start “kind of slow because of the conditions. I have a lot of horses, non-winners of three, in the 25,000 range that so far there's nothing here. The horses are ready but unless I want to give them away – there's no horses around. So it's kind of a situation where if I run them in spots right now early in the meet, they'll be claimed. I'll be having a fire sale.”

Also, he said, “we’ve got some older ones that had surgery, but they're just now starting back. And they won't be about another month before they get rolling.”

But there are bright spots. He’s got “a lot” of 2-year-olds, and quite a few others are returning from surgery.

For the latest in HRN’s Barn Tour series, Bennett outlined what he has in mind for many of his runners.

One who is coming back is Feast, a 5-year-old ridgling son of Twirling Candy with a 9: 4-0-2 record this year, including a victory in the black-type Rumson Stakes at Monmouth Park.

“He's a really nice horse, but the opportunity of running him here, unless you brought him in for a lower tag or something, there's not that much. You've got the Pelican stakes, and he doesn't want to go too far on paper. I haven't had him all that long, but to stretch him out, I don't think he'll go too far. And then his form on grass. He only had one start on grass, but sooner or later I'll have to start him on grass.”

For others who will come back, “well, I've got In the Loop and Beautiful Grace and that R Calli Kim horse that won the win in Churchill. She's been out with surgery and is ready to come back. And R Adios Jersey is going to run in the restricted stakes here at Tampa in December.”

R Adios Jersey is a 4-year-old who hasn’t started since May. Bennett expects to start her in the FTOBA Sire Stakes on Dec. 10.

Despite the setbacks, Bennett is not concerned. “All these horses, I'll get them going,” Bennett said. “In this game, it’s best not to get too panicky.”

Among his 2-year-olds, Dreaming of Snow “beat a nice field” when she won her first start at Colonial in September. “If she stays on target, she's a nice filly.”

“And then we have another horse that we bred, Handsome Playboy. He won his first time. He's a state-bred horse and hopefully he can win us a couple of nice races.”

Later in the meet, look for Girvin filly here named R Swirvin Girvin. “She can run a little bit. I ran her one time at Delaware – can't run 2-year-olds on lasix, and she bled a little bit. So wait it out until she gets 3.”

“I have a Bucchero colt (Lookin' Super) that I bought myself for 25. He's training pretty nice if he runs up to his workouts. I have another one, My Lady James, by Valiant MInister. She's in down there on Sunday also. She should have won her first time out, she just got a bad trip. She looks pretty good Sunday. These are young horses, Florida-breds, and just starting to come around.”