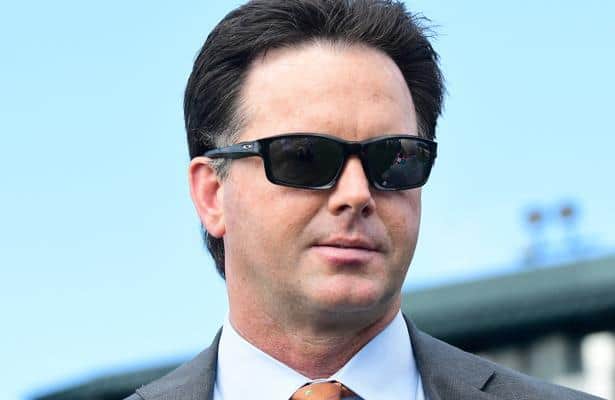 Bret Calhoun is in the midst of another lucrative season at the entry box. The veteran Midwest-based trainer entered Thursday’s action ranked 17th in earnings for the season in North America with $4,621,190 in the bank, which had come while hitting at an 18-percent clip from 444 starters.

Calhoun, whose stable hit its full stride in the mid-2000s, is well on his way to surpassing $5 million in seasonal earnings for the ninth time in his career. This week, Horse Racing Nation caught up with the trainer to get the latest on some of his top horses.

By My Standards. The 5-year-old worked for the first time Wednesday since a troubled last-place finish in the Aug. 7 Whitney (G1). In the 1 1/8-miles feature, By My Standards broke poorly under Gabriel Saez and trailed the field all the way around.

“He stumbled out of the gate and ripped his shoe off,” Calhoun said Wednesday. “We were really very fortunate he didn’t tear his foot up. That obviously hurt our chances.”

By My Standards was returned to Calhoun’s barn at Colonial Downs after the Whitney, which was just his third start of the season. On Wednesday, he got back to work with a four-furlong drill in 48.2 seconds.

“It was heavy fog and I didn’t get to see much of it – I was surprised the clockers were able to get a time on him,” Calhoun said. “But I saw the gallop-out and he was going well. He cooled out good and had a lot of energy, so I was very happy with him.”

By My Standards will now target the $500,000 Woodward (G1) going 1 1/8-miles at Belmont Park on Oct. 2, Calhoun said. A good effort there could lead to a second try in the Breeders’ Cup Classic at Del Mar. Last year, By My Standards was eighth in the Classic at Keeneland.

“It’s always on your mind, but it’s a long ways away. First things first,” Calhoun said. “We’ll point to the Woodward and see how things go.”

Prior to the Whitney, By My Standards won the Oaklawn Mile in May and was second in the June 5 Metropolitan Handicap (G1).

Mr. Wireless. The gelding sports a record this season of 4-1-0 in six starts with earnings of $670,150, which includes consecutive wins in the  Indiana Derby (G3) and the Aug. 7 West Virginia Derby (G3) at Mountaineer Park.

Mr. Wireless also worked Wednesday at Colonial Downs, which was his first breeze since the win at Mountaineer. However, he was not awarded an official time due to the heavy fog at Colonial Downs.

“He actually worked (Wednesday) as well, but they didn’t catch him,” Calhoun said. “He worked an easy half mile. I didn’t see much of the work, but I saw the gallop out and he looked good. Everyone was happy with the way he went.”

“The big difference with him is he’s a gelding. We don’t need to prove anything, we need to make money,” Calhoun said. “There are a lot of good horses going to the Pennsylvania Derby. But it’s a lot of money and we all have to get there. We’ll just continue to monitor who goes where and pick our best spot for him.”

Calhoun added that Mr. Wireless, who was unraced as a 2-year-old, was a horse that was slow to develop and is just finding his best stride.

“I’ve trained some of the family...and they are a very good family, but a little slow to develop,” Cahoun said. “He was a horse that was immature mentally and physically early on. It took a lot to get him to the races...But once the light came on, he got some weight off him and got some fitness, he really moved forward and has continued to progress right along.”

Silver Dust. The 7-year-old gelding has not started since a ninth-place finish in the Stephen Foster (G2) on June 26, which followed a win in the Ben Ali (G3) at Keeneland. He has been working steadily at Colonial Downs since mid-June, but likely will not start again until later in the year.

“He’s doing well, but at this point he is almost white and doesn’t do as well in the heat,” Calhoun said. “We’re just kind of holding his fitness and trying to get through the hotter months.”

“There’s been a couple other places along the way we’ve considered, but it’s just been hot and humid so we’ve passed. I don’t want to burn him up this summer,” Calhoun said. “We’ll just wait until it cools off.”

Lovely Ride. The 3-year-old Candy Ride filly earned her first stakes win in Tuesday’s Cathryn Sophia at Parx, improving her record to 6: 4-1-0 with earnings of $218,610 for owner-breeder Allied Racing Stable.

“She came back well and I was very happy with that effort,” Calhoun said. “She’s a filly that’s still young and inexperienced, but she knows how to win.”

In the Cathryn Sophia, Lovely Ride broke in front and carved all the fractions before gamely holding on by a half-length over favorite Leader of the Band.

“That race was kind of funny as we didn’t really want to be on the lead, but she broke sharply and put herself into the race,” Calhoun said. “Nobody really wanted it (the lead). I think she’s a little better with a target.”

Prior to the Cathryn Sophia, Lovely Ride was a “disappointing” fifth in the July 7 Indiana Oaks (G3), which snapped a previous three-race win streak.

Calhoun said the $1 million Cotillion (G1), also at Parx on Sept. 25, could be next for Lovely Ride.

“That’s one of the reasons we went there for the Cathryn Sophia,” Calhoun said. “I’m not saying it’s 100 percent, but it’s a viable option and I think we would go in there with a little bit of an advantage since she got a race over the track.”

Ain’t No Elmers. The 4-year-old Goldencents filly is back working steadily following a third-place finish when breaking from the rail in the July 28 Honorable Miss (G2) at Saratoga.

“We weren’t excited about the inside post up there, but I thought she ran very well, very game,” Calhoun said. “I don’t know if we would have won, but I think with a better post and more of an outside trip instead of being stuck inside and getting pressure she could have done even better.”

Ain’t No Elmers, who is multiple stakes-placed but not a stakes winner, could resurface in the $300,000 Open Mind Stakes at Churchill Downs on Sept. 18 or a stakes at Remington Park, Calhoun said.

“We need to get a stakes win on her, so we’re looking at all options,” he added.

Gentle Soul. The 4-year-old Tapizar gelding, a half brother to By My Standards, was a sharp maiden winner in his second start at Ellis Park on Aug. 15. Going a one-turn mile on dirt, Gentle Soul attended the pace and drew off in the stretch to win by 3 3/4-lengths.

“He showed talent as a young horse, but had little problems so we had to give him some time,” Calhoun said. “He’s doing really well now. But we want to get him around two turns. We think he’ll really excel.”

Calhoun added there is a two-turn allowance race during the Churchill Downs meet Gentle Soul will likely target.

“Hopefully we’ll go on to bigger and better things after that,” Calhoun said. “We’ve always been excited about this horse.”

Mr. Big News. The veteran of last year’s Triple Crown, sidelined since the Oct. 3 Preakness Stakes, returned from a 10 1/2-month layoff to be an even fourth going a one-turn mile in an allowance/optional claimer at Colonial Downs on Aug. 16.

“I kind of put him in a bad spot, honestly. I asked him to do something he’s really not made to do,” Calhoun said of going one turn. “But I needed to get the year started. He had a couple of setbacks over the winter and we got kind of a late start. I felt like getting a race under his belt was better than training him for another four or five weeks.”

Mr. Big News won last year’s Oaklawn Stakes in the spring and was third in the rescheduled Kentucky Derby at 46-1.

“He got a lot out of that (comeback) and we’re going to wait for a two-turn race at Churchill as well,” Calhoun said.