Barn Tour: Calhoun charts By My Standards' path to Whitney 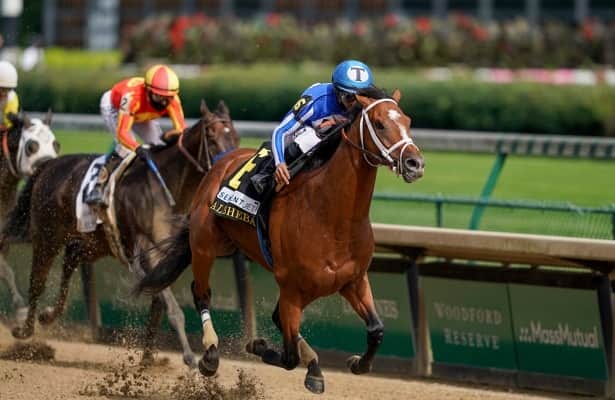 By My Standards knocked heads against well-regarded rivals at both 3 and 4 and picked up big wins along the way.

By My Standards still seeks a Grade 1 win of his own. In four tries at that level, he was 11th in the 2019 Kentucky Derby, then in 2020 was runner-up in the Whitney Stakes and off the board in both the Breeders’ Cup Classic and Clark Stakes.

Trainer Bret Calhoun told Horse Racing Nation during a Barn Tour that the Whitney is once again circled as By My Standards’ “main summer objective.” Saratoga hosts the 2021 renewal of that Grade 1, $1 million event Aug. 7.

“Our ultimate goal this year is to win a Grade 1,” Calhoun said.

By My Standards made his 2021 debut a winning one April 10 at Oaklawn Park. Under jockey Gabriel Saez, the veteran horse overcame a wide trip to beat Rushie by a nose in the Oaklawn Mile Stakes.

In By My Standards’ first work since that race, he breezed four furlongs Thursday in 49.8 seconds at Churchill Downs. He will either stay under the Twin Spires for the $150,000 Blame Stakes on May 29 or ship to Lone Star for the $400,000 Steve Sexton Mile (G3) on May 31, Calhoun said.

A trip to Texas would likely mean a clash with three-time Grade 1 hero Knicks Go. But Calhoun said he is drawn to the Sexton Mile because By My Standards could race in it on the anti-bleeding medication Lasix.

“He doesn’t have a bleeding problem, but we’d like to protect him as long we can before we have to take him off,” Calhoun said.

By My Standards will then point to Churchill’s $600,000 Stephen Foster (G2) off his next race, whether that comes in Kentucky or Texas. He was second to Tom’s d’Etat in last June’s Foster.

Then Calhoun hopes By My Standards would be on to the Whitney in pursuit of a Grade 1 breakthrough.

Calhoun provided updates on some of his stable’s other standouts.

Mailman Money. The 4-year-old Goldencents colt has been off the board in both his 2021 starts. That includes a seventh-place finish in Oaklawn’s Razorback Handicap (G3), which winner Mystic Guide used as a springboard to a Dubai World Cup (G1) score.

Mailman Money raced last spring in Fair Grounds’ series of Kentucky Derby preps, then finished his 3-year-old season with a trio of on-the-board efforts in allowance races at Churchill.

“The transformation from 3 to 4 has been a big step for him,” Calhoun said. “He’s been an immature horse physically most of his life. He’s been a little bit of an overachiever early on, kind of surprised that he won early because he was very physically immature.

“Of course, the more you win, the deeper water it throws you into. So he had to run against some tougher horses and I just didn’t think he was that physically mature. So I think that’s been a tough transition from 3 to 4 for him. But he appears to be on the improve and moving forward. There’s a good allowance race for him here in a couple weeks at Churchill.”

Mr. Big News. Hours before Calhoun spoke to HRN, he welcomed the 2020 Kentucky Derby third-place runner back to his barn.

Mr. Big News, a 4-year-old Giant’s Causeway colt, has not raced since a seventh-place finish last October in the Preakness Stakes. One race prior, the 46-1 long shot was best of the rest behind Authentic and Tiz the Law in the Kentucky Derby.

Connections ran tests on Mr. Big News after his 2020 season and elected for a freshening in Ocala, Fla.

“He’s been in Ocala doing some swimming and some jogging and galloping,” Calhoun said. “He got here this morning and looks very, very good. He’s a few months away from a race.”

Silver Dust. The 7-year-old Tapit gelding won the Ben Ali Stakes (G3) last month at Keeneland and is also likely for either the Blame Stakes or Steve Sexton Mile.

From there, Calhoun said Silver Dust could appear in a variety of events for older runners across the Midwest. He might chart a similar course to 2019 when racing on undercards of the Indiana Derby and West Virginia Derby (G3).

“With him, it’s a little bit different in that he’s a gelding and we don’t have anything really to prove except for trying to win as many races for the most money that we can,” Calhoun said.

Mr. Wireless. The Dialed In gelding broke his maiden on second asking in March at Oaklawn, then followed that effort Saturday by winning an allowance race there. The $150,000 Matt Winn Stakes (G3) at Churchill and the $300,000 Texas Derby on May 31 at Lone Star are both next-race options, Calhoun said.

New Boss. The 3-year-old Street Boss filly won a turf stakes in March at Fair Grounds but was seventh in a turf sprint stakes last month at Keeneland. She is 8-1 on the morning line for another turf sprint, the five-furlong Mamzelle Overnight Stakes on Saturday at Churchill Downs.

Calhoun said he is hoping for a firmer lawn Saturday as compared to her last start, but that rain this week in Louisville, Ky., may leave the course soft.

“I don’t know what the weather’s going to do to us,” Calhoun said. “I definitely won’t run her off the turf. I’ve got some hesitancy about running her on the soft turf.”

Who Took the Money. The Street Boss gelding is off to a 3-for-3 start in his career, with all three victories coming at Fair Grounds. Calhoun is looking forward to trying the Louisiana-bred in open company.

Who Took the Money is a main-track-only entrant for an allowance race Sunday at Churchill going 1 1/16 miles.

“I truly believe that he’s a quality enough horse to run in open company and hit some of these Derbies later this summer,” Calhoun said.