Barn Tour: Brisset on Yuugiri, 6 others in his stable 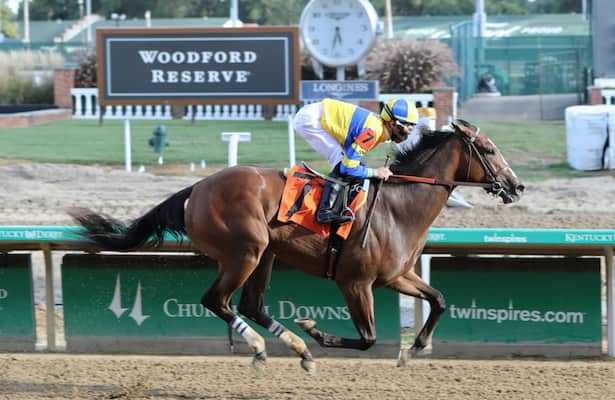 Trainer Rodolphe Brisset is having his best year since going out on his own in 2017, with a win rate of 19 percent and finishing in the money in 55 percent of his starts.

He had a better year in 2019 in terms of earnings and number of wins, but Brisset is happy with the progress his stable has made.

"We've had a very good year," Brisset told Horse Racing Nation Monday. "We're not a big barn, so that's good for us."

One of his more recent successes was a second-place finish in the Golden Rod (G2) with Yuugiri on Thanksgiving weekend at Churchill Downs.

Now at Oaklawn, Brissest provided updates on the 2-year-old filly and others in his stable for HRN's Barn Tour series.

Yuugiri's win in the Golden Rod came after she was beaten by 10 3/4 lengths in the black-type Rags to Riches at 1 1/16 miles on Halloween.

"She ran a good second in the Rag to Riches," Brisset said. "We were kind of scratching our head a little bit. We couldn't figure out if she didn't want to go that far, if she didn't like that track that day, or she wanted to hang a little bit because that's what sometimes she does in the morning, she does the minimum in our breeze. It was a little bit of a break between Rags to Riches and the Golden Rod. And we had two works with the blinkers, kind of reassured us. She kind of showed us what we needed to see and we decided to go to the Golden Rod, and she ran a really good race."

Noting that she earned four qualifying points for the Kentucky Oaks with her Golden Rod effort, Brisset said Yuugiri might continue on that trail after resting at Oaklawn in December.

"We will we try to build up from the Oaks to see to see if she wants to take us there. Could she run twice, could she run three times? I have no idea. She's the one who will tell us. … We could come back in an allowance to get softer spot, or we could come back straight in a points race."

Beau Luminarie is a 5-year-old "iron horse" who has won his last two races. In 18 career starts, he has finished out of the money only twice – in his first race and in a Gulfstream allowance in March 2020. "They don't make race horses like him anymore," Brisset said.

"I know he's got a lot of seconds, but he's like a good French wine, he is getting better and getting older. He kind of found out it was way more fun to cross the wire first than second. The last two races were two very big efforts. So he's in Oaklawn too, and we we have a couple options but we want to give him a break too. But he could run one more time. We could be looking at the Tinsel Stakes at Oaklawn on Dec. 18. … We will see how he does and get him ready for next year.

"The only time he got out of the trifecta, that was the trainer's fault. I ran him in a seven-furlong, a very tough allowance at Gulfstream when we were riding amid COVID and everybody tried to run where they can run and freaking out because they are closing track after track, and I ran him that seven furlong – it was really stupid. That was a waste of a race. And I still apologize to him for that. But he's a cool horse, he's a really cool horse."

Harvard is a promising 3-year-old Pioneerof the Nile colt who had a record of 4: 2-2-0 before finishing fourth in the Curlin Stakes at Saratoga.

"After the Curlin in Saratoga – he was with us seven to eight months, and he's run hard and we just thought it looks like he wants to use another break. Mentally, he could mature too, so we decided to pull the plug. He gets 60 days off at winter and he's actually right now galloping and doing fine, getting fit again. He should be back with us in the next three or four weeks. But we could have some nice hopes for him at 4 years old. He's run some fast races and he's a little bit of a tricky horse, but hopefully he will grow into that and then we can we can have a nice 4-year-old."

Winterwood, a 2-year-old son of Maclean's Music, is one of two Brisset colts in 2022 Kentucky Derby futures, listed at 125-1 by Circa Sports after finishing third in each of his two starts.

"We got a good third the other day. He was pretty impressive the first time out – he got kind of banged at the gate and we are dead last and a lot of space in front of us" before he rallied to finish third.

"Maybe he wants to try two turns, so in the next two or three weeks, if we have a mile, a mile and a 16th here in Oaklawn, I think we're going to try two turns with him. …. Even being by Maclean's Music, he's a horse that is physically made more like a two-turn horse than a sprinter. So I think he's shown us enough where we should be able to get a good position going two turns and then maybe get the job done and get on the Derby trail. But we still are far from that. He still has to step up the game again."

Great Escape is a son of Midnight Storm who is listed at 175-1 by Circa and 200-1 by Caesars at William Hill. After breaking his maiden in September, he finished ninth in the Breeders' Futurity (G1) in October.

"He got a really, really rough trip in the Futurity. He got banged around pretty hard, actually got a pretty nasty cut on his left foot. Two years old – 90 percent of the field was coming from a one-turn race, and we all know how it goes. Everybody's playing to the front runner, and somebody's got to take back and jump the fence. Well we were one of them. So, you know, he ended up being banged around pretty hard. And you know, those 2-year-olds, they're not used to that. He can take a lot out of that.

"So he didn't show that day, but we still are high on the horse. We're giving him 30 days or 45 days and he's back galloping at WinStar – should be on his way to us in the next 10 days. So he will be a horse we can look at coming back in mid-February. ... We can find may an allowance or if he he shows us something good enough where we want to come back in a points race, we wouldn't be scared to do that. But, one by one, let's start first getting back with us and then go from there."

Camp David is a 2-year-old Pioneerof the Nile colt who broke his maiden on third try in a 1 1/16-mile off-the-turf race at Keeneland in October – "good enough and fast enough where the ownership decided to give him a little break and kind of regroup with him and bring him back down here.

"The question with him was we felt like in a one-turn race he was good enough. He didn't win, got beat a couple lengths, but he always has been a horse giving us the indication he wants two turns. So even though the race came off the turf, we decided to go ahead and run him because we can run him two turns. And he won pretty nicely – 47 flat the first half and put pressure on the leader all the way around and took over. The kind of horse he does the minimum in the morning … so he he could have won going away, maybe better. But then the race came back fast enough where we're happy with the numbers. And we decided to give him a break and then give him a chance to be a good horse."

Through their September Farm, Brisset and his wife, Brooke Baker, own a share of Western River, a full brother to 2016 Belmont Stakes and Arkansas Derby (G1) winner Creator. He has not broken his maiden in three starts, but he finished second by a nose to Brad Cox's Ready to Purrform last out at Ellis Park.

Western River's last two starts were on turf, and they were "sneaky good," Brisset said. "He should have won (last out). He got beat a nose – actually, his nose was in front of the wire before and after the wire and at the wire, he got beat a nose. We just decided to give him some time. And we could have sent him to Turfway and kept him on the Tapeta and he could maybe end up on turf forever. We just felt like, with the fact he's a full brother of Creator, we just felt like he could maybe have a chance here too. So he's just been galloping with us and start to breeze in two weeks or so. But he could be a horse could develop to be a good horse. We hope so anyway."

Brisset said that if there was a disappointment in 2021, other than the "weekly ups and downs," it was that he was unable to win a graded stakes with Crystal Ball, a 4-year-old Malibu Moon filly who has been retired to become a broodmare. She has a career record of 11: 4-2-2, but the closest she came in six graded-stakes starts was second in both the Coaching Club American Oaks (G1) and the Locust Grove (G3) – the latter by a neck to Shedaresthedevil in September.

"Physically, she's maybe one of the best looking mare I've ever been around physically. She's absolutely drop-dead gorgeous. … That mare would have really, really deserved to win a graded stakes."