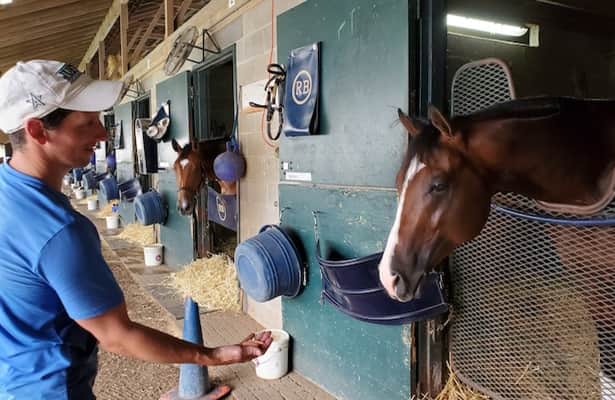 The barn of Rodolphe Brisset got a few new equine faces this spring when several horses were transferred to him from Bob Baffert – plans that were in motion before the Medina Spirit controversy arose.

Rodolphe discussed those runners and others in his barn for the latest in Horse Racing Nation’s Barn Tour series.

Crystal Ball, a 4-year-old filly, won a May 8 allowance race at Churchill Downs for Baffert, and she scored in the Lady Jacqueline Stakes at Thistledown last weekend for her third straight win and first under Brisset.

Speaking of the win streak, Brisset said her connections "just went through the conditions. The first one in Santa Anita, the second one in Churchill, and then Mr. Baffert and the ownership decided to leave her in the Midwest. So they sent her off to us and we took our time. We were able to get get some nice breezes into her, and then she's a stakes winner now. She won very nicely over the weekend."

Hozier, another Baffert transplant, won an allowance race at Ellis Park on Sunday. Eight days earlier, he has a "head-scratcher" debut for Brisset, finishing last in the Ohio Derby (G3) on June 26. The trainer said that race was "one of those things where we put a line through it and then move on." He told HRN after Sunday's race that “we may have ridden him too much for the win last time.” Hozier will be in the Fasig-Tipton July sale of selected horses of racing age. Whether the colt is kept, sold or fails to attain his reserve price, Brisset hopes he will still be the trainer. He said he has learned that a mile might be Hozier's limit.

Bezos has been working for Brisset at Keeneland after finishing last in the Lexington (G3) in for Baffert in April. For now, there is "no plan. He just had his first half a mile a couple days ago. We went an easy half a mile. We are going to let him tell us what he wants to do and when. Obviously, he should be around very quick. It's only been 45 days and he's already had three breezes for us. So I would expect – if he has no issues – something in the next five, six weeks. Maybe a little shorter than that. But now right now, nothing has been mapped."

Myopic, who broke his maiden with a six-length win at Indiana Grand on June 23, might be a "late bloomer," Brisset said. "He seems to be an up-and-coming 3-year-old. A Candy Ride colt. He was with Mr. Baffert. He ran twice in California – two educational races, I guess. I think the horse learned to run. And then we found him a softer spot in Indiana and he ran to true expectation. … That horse is at the Fasig sale, so he may go through the sale. But that horse is going to be nominated to every big stakes coming up."

Harvard won a June 11 allowance race at Churchill Downs, giving Brisset enough confidence that he is considering the Curlin or Jim Dandy (G2) at Saratoga for the 3-year-old's next start. Owned by CHC Inc. and WinStar Farm, the Pioneerof the Nile colt broke his maiden on third try at Indiana Grand in May.

Brisset told HRN that he also had considered Wednesday's Indiana Derby, but the timing did not work well after a tough race last out.

"We like the horse, and we want to give him every chance to show us if he's good enough for the big league. But it looks like the Curlin or the Jim Dandy could be the landing spot, and if he's not doing good enough, I think the week later we have the West Virginia Derby. So we have options, but the Curlin and the Jim Dandy will be our first look."

Rockpaperscissors, another 3-year-old WinStar filly, broke her maiden last fall at Churchill Downs and made her 2021 debut with a 3 1/2-length win in a 1 1/16-mile off-the-turf race at Indiana Grand on June 21. "Not an easy filly to train but we kind of got her figured out and we were able to get her ready enough," Brisset said. "It actually ended up being a very good comeback. But I was not sure about the mile and 16 off the layoff. She's a Distorted Humor – she's by Rockside and it's a whole WinStar family. Seems like she wants to go pretty far. … We still have to choose and pick a spot for her, but we are hoping she could be maybe a black-type winner at one point."

Brisset worked as an assistant trainer for Bill Mott before going on his own in 2017. He consolidated his 40 trainees at Keeneland this year but will move half of them to Turfway when it opens.

He and his wife have a farm in Versailles, Ky., and "we want to support Kentucky racing more than anything."

He said he will ship and run horses at Saratoga.

"I've got a pretty good team where I can leave with those horses and go run them myself in Saratoga. And then we can keep hitting the ground running here."