Barn Tour: Bret Calhoun is on a roll at Fair Grounds 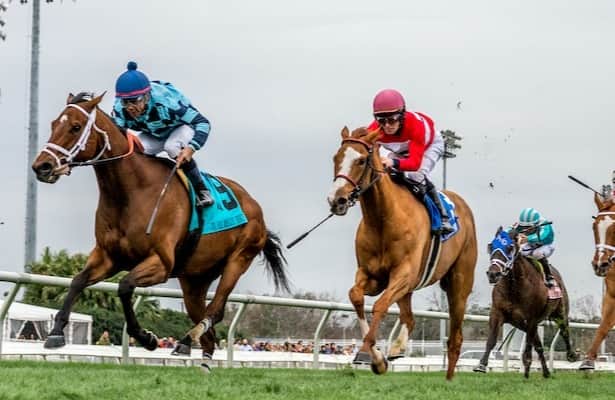 Bret Calhoun is off to a very good start at Fair Grounds this year, and it’s all according to plan.

“Things cycle around,” Calhoun told Horse Racing Nation on Tuesday. “If you have a hot meet, sometimes you go through all your conditions and it's a little tougher the next meet. But we had a little bit of a slow summer for one reason or another, a lot of the horses weren't ready, some of them weren't good enough. And we got them all ready and got down here and things fell in place, and we had the right races to run them and they got right.

“So it's just, everything kind of fell together, and that's kind of how it goes. We planned on having all the Louisiana-breds ready for this meet because this is the meet with the most money for them. And then the open horses, we knew they’d been kind of laid up and off or not completely ready for the summer. They were all ready for the fall.”

Calhoun discussed his top horses and promising 3-year-olds for the latest in HRN’s Barn Tour series.

Hidden Connection. This 4-year-old Connect filly took a break after finishing 12th in last year’s Kentucky Oaks (G1). She came back to finish third in a November allowance at Churchill Downs then won her last start, a Dec. 16 allowance at Fair Grounds, by 7 1/2 lengths. “We had a setback in the Oaks,” Calhoun said. “She came back, bounced back very well. She's in Saturday in the Houston Ladies Classic (G3). She's doing great, third race off a layoff. This is kind of going to be, hopefully, an improving race for her to step back into Grade 2 and Grade 1 competition, we're hoping.”

Gentle Soul. The 6-year-old gelding has won four of his last five starts including a victory in the Col. E. R. Bradley listed stakes Saturday at Fair Grounds. “He was solid force coming around. He's a half to By My Standards. He was a little slow developing. He's been pretty consistent throughout his career, but once we got him on the grass, he seemed to excel. We finally kind of got the trip we wanted the other day. He seemed to put it all together. . … He's a horse that's just doing very well, probably will continue to get better with age as those siblings have.” Look for him next in the Feb. 18 Fair Grounds Stakes (G3).

Sutherland. The 4-year-old son of Twirling Candy didn’t break his maiden until his fifth start, but he’s finished first or second in his last six starts, most recently a runner-up by a head in a black-type stakes at Fair Grounds. “A tough beat last time out. But we do think that he's probably a little better on the grass. I think he's versatile, I think he can go short or long on the grass for sure. I don't know about the dirt or how far he wants to go on dirt. My first thought would be to try to keep him on the grass, but we've got limited turf racing right now at the Fair Grounds. So we're not quite sure what we're going to do. We may end up trying him back on the dirt until we can find an appropriate grass race for him.”

Mr. Wireless. The 5-year-old son of Dialed In lost by a neck Saturday in the Louisiana (G3). "A heartbreaker,” Calhoun said. “He’s a horse that just brings it every single time. Very good-hearted horse, tries really hard. Very consistent. He's a horse that will point back to the next round of stakes here at the Fair Grounds as well on the 18th of February” in the Mineshaft (G3).

Run Classic. The 5-year-old son of Runhappy was fourth in the Louisiana. “I think that was a real disappointing race for us. I think we just got the wrong trip that day. He was acting up a little bit in the gate and was a little tardy away from there. And Bryan made a split-second decision to sit instead of push him on, and he got covered up. It basically took all his advantage and his style running away from him. He's a horse that's a fast horse, he's got a high cruising speed. And he was just bottled up in there, covered up behind horses. And pretty much I knew early in the race it was over for us. I think a lot of people question his distance ability. I don't really have a problem with it or question it, a mile-sixteenth. But, yeah, if you asked me what the ideal perfect distance for him would be, probably seven-eighths or a one-turn mile. Don't have a lot of that going on this time of year. So not exactly sure what the plan is for him right now. He came back good. Just disappointing. I think if he had gotten through, gotten in front that day, I think he'd have probably run them off their feet.”

Who Took the Money. This 5-year-old gelding won six of his last eight starts, dating to 2021, and was third in the other two. He won the Louisiana Champions Day Turf last out as the odds-on favorite. “Who Took the Money has been a nice Louisiana-bred, obviously excels on the turf. He's gone both ways for us, dirt and turf, but obviously a better turf horse. We're contemplating right now what direction to go with him. We don't have another Louisiana-bred turf stake until March 4. There is a Louisiana-bred stake at Delta, which he has run once there. He actually ran one of the faster races of his career, which was really a pleasant surprise to me. But we also have another horse for that spot. So I think that you'll probably see him Feb. 4 at Delta.”

Learning to Win. The 4-year-old Munnings filly finished fourth in her August debut then came back Friday for her second start and broke her maiden at Sam Houston Park. “She's just had some bumps along the road. And it took some time to get her there. And I thought she had a really good race off the layoff. We'll try her back in a first allowance condition and see where she takes us.”

Jack Hammer. This Jimmy Creed colt is 2-for-2, with his most recent win in the Dec. 31 Louisiana Futurity. “I think that he could possibly go on to bigger and better things outside of Louisiana-bred company at some point. He’s going to run in a Louisiana-bred stakes race as well on Feb. 4 at Delta. Kind of just take it one race at a time with him. We've got several Louisiana-bred races to run him in right now. So we kind of have a safety net. But at some point in time, we will probably test the waters outside of Louisiana-bred company. He's young and inexperienced, two starts, two wins, but he seems like he has quite a bit of talent.”

Free Drop Maddy. The daughter of Free Drop Billy raced six times last year and won her last two, including the Louisiana Champions Day Lassie Stakes last out on Dec. 10. “Ultimately consistent for us throughout her 2-year-old year. She's a smallish filly with a big heart, fast. She's going run on the Champions day at Delta on Feb. 4 as well.”

Lordy Lordy. The gelded son of Lord Nelson broke his maiden in his first start Friday at Fair Grounds. “He just won on raw ability, honestly. He didn't have a clue what he was doing throughout the race. It was pretty obvious he didn't have any idea what he was doing. But he was good enough to get up and went and showed a little heart and determination down the lane. So we'll see him back in an allowance race. I think that he could go farther as well if that race presents itself.”