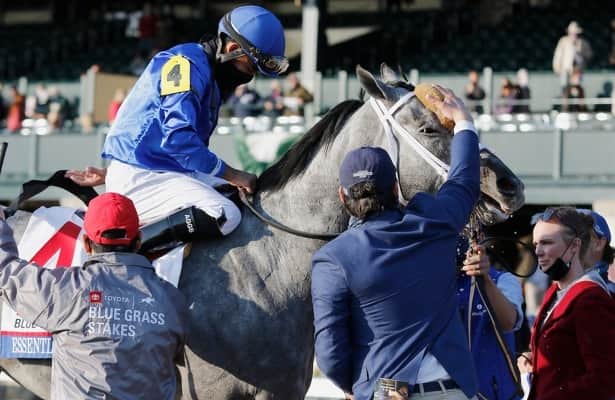 Photo: Candice Chavez/Eclipse Sportswire
Check out Barn Tours on Horse Racing Nation
Brad Cox knows he has one of the leading contenders for the 2021 Kentucky Derby. What he doesn't know yet is whether he will end up with three entries.

Cox spoke with Horse Racing Nation Tuesday, providing an update on the possible Derby trio and other stars in his barn.

The leading contender, of course, is undefeated Essential Quality, the 2020 2-year-old champ who won the Blue Grass (G2) Saturday after a tough stretch battle with Highly Motivated.

"He showed a lot of grit and determination and a will to win," Cox said. "… He's got a lot of fight about him, and I was glad he was able to come out on the right end. And he came out of it in good order. And we got him to Churchill and everything's going the right way. We're very happy with how he came out of the race, and on to the Derby."

The Godolphin homebred's regular rider, Luis Saez, will be aboard for the Derby, said Cox, a Louisville native who has never won the Derby.

"A lot of class. I wouldn't use the word simple, but he doesn't give you too much grief. He's pretty cool to handle."

Next in the lineup is Mandaloun, who ranks No. 12 on the Kentucky Derby leaderboard. He had won three of his first four starts, with a third-place finish in the Lecomte (G3) before finishing sixth in the Louisiana Derby (G2) last out.

Cox had plenty of early confidence in the Into Mischief colt. He has said he couldn't explain the Louisiana Derby performance but that he was writing off that race and continues to point toward the Kentucky Derby.

According to Equibase, Mandaloun breezed four furlongs in 49.8 seconds on Saturday.

The Juddmonte homebred's regular rider is Florent Geroux – who also is the regular rider for Caddo River, the third colt in Cox's Derby bunch.

Caddo River drew the No. 2 post in Saturday's Arkansas Derby (G1), in a bid to pick up enough points to make the Kentucky Derby. He again will face Concert Tour, Essential Quality's rival as the top Kentucky Derby prospect.

"We'll kind of have to see how things play out" for jockeys if Caddo River makes it into the Kentucky Derby, Cox said.

Caddo River, a Shortleaf Stables homebred, finished fifth in the Rebel Stakes (G2) last out after he was unable to keep up with winner Concert Tour.

"I just thought maybe we kind of took him out of his game by trying to getting him to rate off the other horse," Cox said. "We're going to be a little more aggressive this time. Probably just kind of let him do his thing early on in the race and place himself where he wants to be and go from there. I don't know if that will change the result, but that's what we're going to do."

Cox said he is happy with his post position and isn't focusing on the task of taking on Concert Tour again.

"We'll just do what we do. That's all we can do. You can't control what anyone else is going to do. Just going to see how things play out, and the horse is doing well. So hopefully, we can get a little bit of a different result this time."

Caddo River has 10 Kentucky Derby points, so a second-place finish should be enough to qualify him for the Run for the Roses.

But "there's good seconds and there can be bad seconds," Cox said. "So we'll just have to see how it goes. We're hoping that he gets 100 points."

Cox's Travel Column, No. 2 on the Kentucky Oaks leaderboard, has quite a rivalry going with Steve Asmussen's Clairiere, No. 3 in the standings.

They have finished 1-2 in their three meetings, with Travel Column topping Clairiere in the Golden Rod (G2) in November and the Fair Grounds Oaks (G2) last out and Clairiere taking the Rachel Alexandra (G2) in between.

"This filly's got speed," Cox said of Travel Column. "I like that about her."

He said she and Clairiere are "the top fillies in the Midwest region, obviously. Now we've got to contend with fillies from New York, Florida and California in our next race. So we have a nice little rivalry going between those two, but there's going to be a lot more competition. It won't just be Clairiere this time, so she's going to have to step up. I think she's a tremendous filly, and she's in a good spot. I'm very happy with the way she came out of the Fair Grounds Oaks."

On the Oaks bubble is Coach, No. 16 on the leaderboard for a race with 14 slots. She finished third in the Fantasy (G3) on Saturday.

"She ran really, really well in the Fantasy," Cox said. "Super pleased with her performance. Her numbers went the right way. Everything you want to see from a young 3-year-old. She's under consideration for the Oaks; we'll prepare as if we're running. We'll have to kind of wait, see if we get in. And we'll just have to see how she's doing come time of entering."

Monomoy Girl. The two-time Eclipse award winner is pointed toward the April 17 Apple Blossom (G1) at Oaklawn. "She's going to breeze at Oaklawn on Saturday, prepare for the race on the 17th. She's there now. She's doing fantastic," Cox said. "Looking forward to getting her first Grade 1 as a 6-year-old, looking forward to that challenge. She's doing really well, and I'm super happy with how she's training right now."

Shedaresthedevil. Last year's Kentucky Oaks winner is pointed to the La Troienne (G1) at Churchill Downs on Oaks Day after scoring in the Azeri (G3) last out at Oaklawn. "She's back at Churchill. I think she really likes Churchill. Not that she doesn't like Oaklawn – she's performed very, very well at Oaklawn." The La Troienne "gives us an opportunity to take a swing at a Grade 1 early in the year and hopefully make a march toward the Breeders' Cup Distaff. She did not get that opportunity last year. We felt like after the Spinster she deserved a break, she'd had a long year. And she's really training well right now and it seems as if she's moved forward from 3 to 4."

Knicks Go – After scores in the Breeders' Cup Dirt Mile and the Pegasus World Cup (G1), he finished fourth in the Saudi Cup and hasn't raced or had a published work since. "He's back galloping, he's training here at Churchill," Cox said. "He'll probably have his first work this weekend. We're just going to try to get to our first work here at Churchill, see how things go. But as far as a race, no plans right now."

Wells Bayou – He finished third in the Louisiana Stakes (G3) in January off an injury. He is entered for Saturday's Oaklawn Mile.

Owendale – The 5-year-old has been in the money in five of his last six starts but hasn't scored since May. He is pointed toward the Oaklawn Handicap (G1) on April 17.

Getridofwhatailesu – She'll follow up her third-place finish in the Azeri (G3) in either the La Troienne or the Apple Blossom. "We're just going to kind of weigh our options and see what makes the most sense with her."

Warrior's Charge – He was second in his first start of the year, a one-mile allowance at Oaklawn. Cox said the Oaklawn Handicap is under consideration for him too. "He's doing well. We're just going to kind of see how the field's shaping up and go from there."

Bonny South – She is expected to make her 4-year-old debut in the Doubledogdare (G3) on April 16.