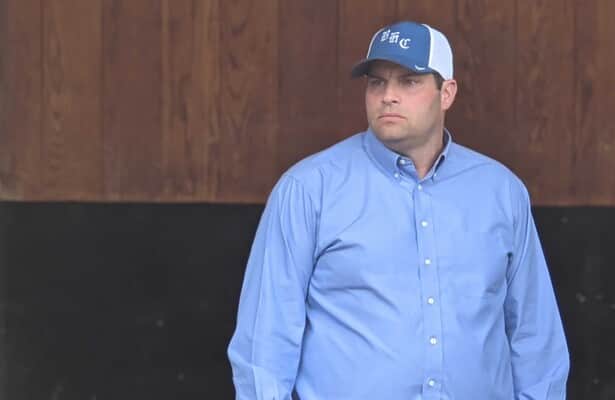 Clearly, Brad Cox is not scared of Knicks Go getting into a round-the-track speed duel with Life Is Good in Saturday’s Grade 1, $3 million Pegasus World Cup Invitational.

Already the winner of one Eclipse Award as top trainer and perhaps on the verge of another, Cox has fielded one question after another this week from reporters asking about it.

“Is there a danger, Brad, that this could turn into a match race?”

That was the money line in his interview on Friday’s Ron Flatter Racing Pod. Since coming to his barn from trainer Ben Colebrook in the winter of 2020, Cox has looked after the second and most successful half of Knicks Go’s career, one that was rewarded with the World’s Best Racehorse honor this week and is likely to be honored with a U.S. championship at the Eclipse Awards on Feb. 10.

Before going to stud, the last act on the racetrack comes Saturday evening, when 6-year-old Knicks Go will be favored to repeat as the winner of the Pegasus.

It was a perfect place for Cox to begin his latest Barn Tour for Horse Racing Nation.

Knicks Go. After his fifth Grade 1 score came nearly three months ago in the Breeders’ Cup Classic, the plan always was to have this 6-year-old by Paynter race one last time this weekend at Gulfstream Park. Cox said Knicks Go has not put a foot wrong, especially with two bullet works in the last two weeks.

“His works have been fantastic,” he said. “I feel like we’re every bit as good now as we were leading up to the Whitney (G1) or the Lukas Classic (G3) or the Breeders’ Cup.”

Cox elaborated about translating strong workouts in the morning to a winning streak that has reached eight races when going two turns. Knicks Go will try to make it nine such wins Saturday with jockey Joel Rosario.

“He’s been a horse that’s always put a lot into his works and always big gallop-outs,” Cox said. “He used to kind of want to lean in a little bit from time to time, and now he just seems to be as straight as an arrow. He was like that pretty much all throughout the fall. I think his works have definitely improved somewhat a month or so ago. I think he’s older, wiser, smarter and definitely better. He’s definitely not regressing. He has continued to step forward in this string of wins around two turns.”

Paynter was an ornery racehorse, so it would not be a surprise to see that trait in his offspring. While that is not a description that comes to mind with Knicks Go, Cox said the star of his barn can be a handful.

After the Pegasus, Knicks Go will be shipped to Kentucky to begin his breeding career for Taylor Made Stallions. He will command a stud fee of $30,000.

Mandaloun. With the possibility he will be promoted to 2021 Kentucky Derby winner at a Kentucky Horse Racing Commission meeting Feb. 7, the 4-year-old Into Mischief colt has been all but committed to racing Feb. 26 in the $20 million Saudi Cup. That was the thinking right away after last weekend’s triumph in the Louisiana Stakes (G3) at Fair Grounds. “He came out of the race extremely well,” Cox said. “We’re looking forward to turning our attention toward the Saudi Cup. He received some figures (last Saturday) that should stack up with some of the best in the world. Ultimately, it’ll be up to the Juddmonte team and (manager) Garrett O’Rourke, but I think it’s definitely a strong consideration. As long as he’s doing well, that’s where he could end up.”

Warrant. Not to be forgotten was this 4-year-old Constitution colt’s third-place finish in the Louisiana Stakes. “If we can dodge horses like Mandaloun and Midnight Bourbon (second last Saturday), he’s going to win his fair share of races,” Cox said without naming a specific date. “I always thought he was a horse that would appreciate more ground, and we’re going to give him that opportunity. We’d like to get him races as far as a mile-and-an-eighth and a mile-and-a-quarter. I think they are things that he could definitely handle.”

Shedaresthedevil. With three Grade 1 wins, the 2020 Kentucky Oaks winner might follow the path that Cox’s retired champion Monomoy Girl took last year in aiming for the Apple Blossom Handicap (G1) on April 17 at Oaklawn. First, though, the 5-year-old Daredevil mare might make a March 12 defense of her season-opening, Grade 2 victory last year on the same track. “The Azeri would be a possible goal,” Cox said. “We do have her at Fair Grounds, so we would ship her up for that race. I think the spring goal would be the Apple Blossom. After that we turn our attention toward the Breeders’ Cup and work our way back.” The Breeders’ Cup Distaff at Del Mar was where Shedaresthedevil finished a fading sixth last fall. Right after that she was sold for $5 million and sent back to Cox. “Mandy Pope bought her with Qatar (Racing) and Flurry Racing Stables. I’m excited about that partnership, and hopefully we can get this filly back to the Grade 1 winner’s circle.”

Juju’s Map. Last year’s Alcibiades (G1) winner finished a distant second to likely division champion Echo Zulu in the Breeders’ Cup Juvenile Fillies. Now the Liam’s Map filly might be a long shot to make it to the May 6 running of the Kentucky Oaks. “She just started back in light training,” Cox said. “We gave her a little time after the Breeders’ Cup. It’s possible she can maybe make a start March or April. The Kentucky Oaks might be a little bit of a stretch, but we’ll let her kind of tell us how she comes along over the next few weeks and go from there.”

Vivar. Drawn into the outside post in a field of 12, the 3-year-old Cairo Prince colt is a 12-1 long shot in the Southwest Stakes (G3) on Saturday afternoon at Oaklawn. That is where the allowance winner was hung out wide finishing fifth on New Year’s Day in a sloppy running of the Smarty Jones. Cox hopes the forecast of a sunny weekend, a switch back to jockey Florent Géroux and an equipment change will translate to a more favorable outcome. “A little better trip, and we added blinkers,” Cox said. “I think the ground is going to help him. I think he’s a horse that will definitely like a mile-and-a-sixteenth a little more than he did a short-stretch mile.”

Rocket Dawg and Cyberknife. At 45-1 and 75-1, respectively, they are the two shortest-priced horses from Cox’s barn in Las Vegas futures for the Kentucky Derby. That is despite the fact they finished sixth this winter in their first Derby preps. “They both have work to do. With Rocket Dawg, we have backed off of him a little bit. He’s in light training. Hopefully we’ll get him back started maybe at some point in March. Cyberknife really didn’t fire the way we were expecting in the Lecomte (G3). We’ll see how he bounces out of it. We’re probably going to look at a first-level allowance and hopefully get him back on the winning track. If all goes well, we can maybe look at some graded stakes and some Derby points races after that.”