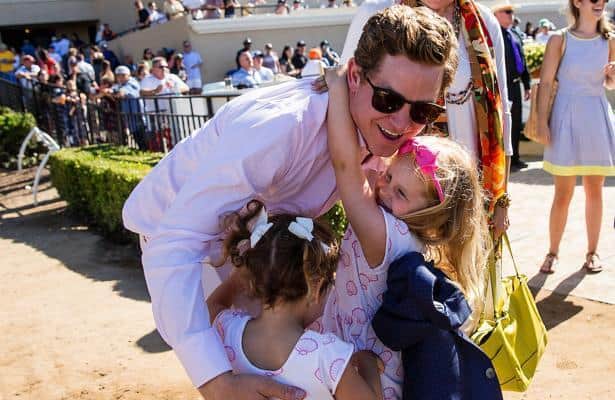 Dan Blacker is tracking for a career-best season in 2022. The 40-year-old trainer, who operates a 28-horse stable on the Southern California circuit, has won at a 25 percent clip this year and banked $541,200 in purse earnings entering Thursday's action.

Following a strong Santa Anita winter-spring meet, Blacker kicked off Del Mar with a bang when 3-year-old Straight No Chaser dominated a maiden special weight on turf Sunday. Blacker also picked up a minor stakes check Friday when Brit’s Wit, who was claimed for $50,000 at Churchill Downs last month and shipped to Del Mar, was a troubled fifth in the Oceanside.

“We’ve had a good year overall. We’ve had some nice horses and good support from some new owners and our old owners,” Blacker told Horse Racing Nation Tuesday. “Fortunately, things have fallen into place this year for our team.”

Last year, Blacker had a personal best $762,490 in purse earnings when hitting at a 12 percent clip. The native of England, who started his training career in 2011, updated Straight No Chaser, Brit’s Wit and other top talent for this Horse Racing Nation Barn Tour.

Straight No Chaser. The 3-year-old Speightster colt was working up a storm with a plan to debut on dirt at Los Alamitos. But a setback forced Blacker to scrap those plans and run him on turf first out. Straight No Chaser responded with an easy gate-to-wire win by two lengths, covering five furlongs in a sharp 56.44 seconds.

“We actually planned to run him at Los Alamitos, but he got a little sick just before the race so we had to move the goalposts,” Blacker said. “I always had intentions of running him on the main track first out because he’s worked so well on it. I don’t have a lot of good dirt horses, and he’s always showed a lot of talent.”

Blacker said he plans to be patient before determining a next start for Straight No Chaser, but it will be a “similar kind of distance” and possibly on dirt.

“We’ll just kind of ease him back onto the track and assess how he’s doing. No plans yet. We’ll check his energy, see how he works and let him tell us when he’s ready to run again,” he said.

Straight No Chaser is out of the Johannesburg mare Margarita Friday. A $110,000 auction purchase as a 2-year-old, he is campaigned by My Racehorse.

Brit’s Wit. The 3-year-old son of English Channel was red-tagged June 10 at Churchill Downs by America’s Pastime Stables after a win going one mile on turf. Subsequently sent west to Blacker, Brit’s Wit had a slow start in the Oceanside, was forced to wait behind horses on the second turn, then finished willingly to be fifth behind winner Balnikhov.

“We were thrilled with his run,” Blacker said. “We claimed the horse for 50, I really love English Channel. I think they tend to move up a little when they come to California. I think it might be they like the turf conditions.

“But we were all looking for a horse to claim for Del Mar and this one came up. It was a four-way shake. We got lucky.”

Blacker added he was looking to run Brit’s Wit one mile on turf in his first local start. The only other option besides the Oceanside was to take on older horses in an allowance.

“I thought, let’s take a shot. I didn’t think this came up as one of the tougher Oceansides,” Blacker said. “The winner was really good, but I didn’t think it came up that tough on paper. I thought (Brit’s Wit) ran great being the first time off the claim.”

Blacker added Brit’s Wit likely will take advantage of his starter allowance condition in a race at Del Mar in August.

Queen Ofthe Temple. Third in the Santa Barbara (G3) at Santa Anita two starts back, she is entered in a first-level allowance optional claimer Thursday at Del Mar going 1 3/8 miles on turf. The 4-year-old daughter of Temple City is 4-1 on the morning line.

After Queen Ofthe Temple’s was a solid third in the 1 1/2-mile Santa Barbara in her stakes debut, she returned to be a disappointing fourth as the favorite in an allowance optional claimer going 1 1/8 miles at Santa Anita. Blacker said she had an excuse for the effort.

“She was just too far back off a really slow pace on a track that was relatively speed favoring with the rails out,” he said. “She flew in the final quarter and made up a lot of ground. She ran deceptively well.

He added the stretch-out on Thursday should be to her liking. Additionally, Umberto Rispoli, who had two stakes wins on turf opening week of Del Mar, will take over in the irons.

“We’re back at her preferred distance, similar to when she ran her best number in the (Santa Barbara),” Blacker said.

Hit the Road and Burnin Turf. The former is a Grade 1 winner and Blacker’s all-time highest earner, with $588,751. The latter was his top horse at this year’s Santa Anita meet going 3-for-4, with the lone loss being a third in the May 29 Daytona (G3) in his stakes debut.

Both are on the sidelines.

“Burnin Turf was great for us over the winter, and he’s just very good down the hill (at Santa Anita),” Blacker said. “We felt it was time to give him a break. We sent him back to Old English Rancho for the summer and we’ll just point for Santa Anita after Christmas.”

“He had some bone bruising and we’re just giving him lots of time. … He should be coming in in a couple of weeks," Blacker said. "But we’re not pointing him to any races now. We’ll get him back into light training at Del Mar and find a race towards the end of the year.

“We certainly hope to run him next year as a 6-year-old and hopefully get some more big wins,” he added.