Barn Tour: Asmussen on what's next for his top talent 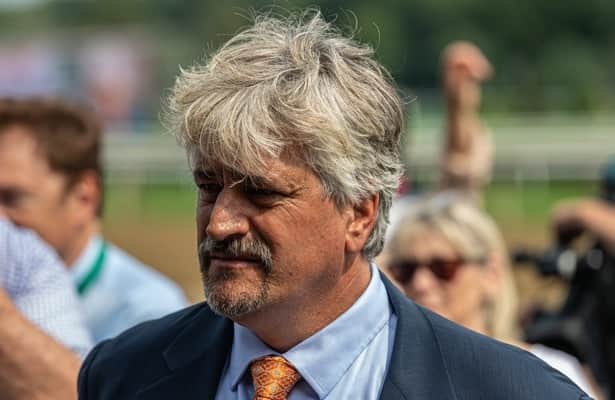 Saratoga always will hold special memories for Steve Asmussen. It was only last Whitney day that the Hall of Fame trainer moved past the late Dale Baird to become North America’s all-time leader with 9,446 victories when debuting Stellar Tap captured a seven-furlong sprint.

Asmussen, 56, continues to pile on wins with a far-flung operation deep in talent at all levels. He already is past the 9,800-win milestone as he looks to make more memories at Saratoga and elsewhere. He discussed his top talent during a Barn Tour for Horse Racing Nation.

Jackie’s Warrior. Owners Judy and Kirk Robinson decided to bring back the son of Maclean’s Music for his 4-year-old campaign after he delivered the Eclipse Award as the nation’s leading sprinter. They have been rewarded with a 3-for-3 record that Jackie’s Warrior puts on the line in the July 30 Alfred G. Vanderbilt Handicap (G1) at Saratoga. He boasts 11 wins in 15 starts overall, with more than $2.4 million in earnings. He comes off a five-length score in the June 10 True North Stakes (G2) that was easier that it looked because jockey Joel Rosario eased him before the wire. Jackie’s Warrior tuned up for the Vanderbilt with a five-furlong work on July 17 that he completed in 1:00.27. Asmussen: “He’s doing extremely well. We’re extremely proud of his three races this year. He’s an extremely special horse. It’s very rare and fortunate to bring back a champion.”

Clairiere. Owned by Stonestreet Stables, this 4-year-old daughter of Curlin out of the Bernardini mare Cavorting is being pointed toward the July 24 Shuvee (G2) here. She has finished no worse than second in 9 of 13 career starts with five wins in banking more than $1.7 million. Asmussen believes her head decision against highly regarded Malathaat in the June 11 Ogden Phipps (G1) at Belmont Park indicates that she is still finding her ceiling. She drilled four furlongs in 48.96 on July 17 in her final work for the Shuvee. Asmussen: “I think her last race was her best ever. Better things ahead.”

Epicenter. The hard-trying Kentucky Derby and Preakness runner-up will look to break through in the July 30 Jim Dandy (G2), a prep for the Aug. 27 Travers (G1). The Jim Dandy is expected to feature a rematch with Preakness winner Early Voting, who initially was expected to run in the July 23 Haskell (G1) at Monmouth Park. Asmussen: “We’re very proud of the effort he has put in. The races seem to have bothered us a lot more than him. His attitude is wonderful. He’s a very happy, playful horse. His demeanor has stayed the same all year.”

Echo Zulu. Last year's champion 2-year-old female took a wrong turn this season when a track veterinarian scratched her immediately before the start of the June 11 Acorn (G1) at Belmont Park. The daughter of 2017 Horse of the Year Gun Runner has raced only twice this year, the most recent of those when she finished a disappointing fourth in the Kentucky Oaks (G1). Asmussen: “We’re happy to have her back in the barn. She got a clean bill of health from Dr. (Larry) Bramlage. She’s resumed training with no target in mind at this stage.”

Asmussen is very high on his 2-year-old class and has a number of them as part of his 30-horse string at Saratoga. Just do not expect him to name names.

“We have some extremely nice 2-year-olds, some wonderful prospects that I think will shine here this summer,” he said.