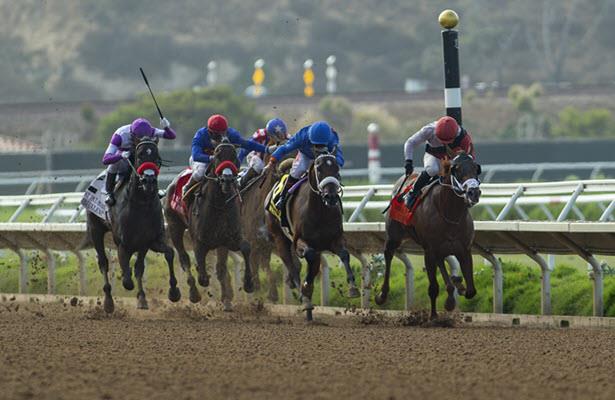 Weston and longshot Girther battled from the gate to the wire with Weston ultimately getting his nose down to prevail in a photo finish in the $150,000 Best Pal Stakes (G2) for 2-year-olds at Del Mar on Saturday.

Weston-- a debut winner going 4 1/2 furlongs at Santa Anita on June 21 -- was dispatched as the 5-1 second-choice behind eastern shipper Roderick for trainer Wesley Ward, who was bet down to the heavy 1/2 favorite following a runoff debut victory at Belmont Park.

With Drayden Van Dyke in the irons, Weston broke sharpest of all in the six-furlong Best Pal and proceeded to duel on the lead through fractions of 22:78 and 46.44 for the opening half mile with Roderick to his immediate outside and Girther on the rail.

Roderick proceeded to drop anchor leaving the turn under Flavien Prat and that left it a two-horse race between Weston and Girther for the final quarter mile. Girther proceeded on a slight lead through the stretch and looked like a winner inside the sixteenth pole, but one final surge from Weston and Van Dyke on the outside secured the victory.

Weston gets up just in time to take the GII Best Pal Stakes under @DraydenV for @rhansonracing. pic.twitter.com/o4oZHCXoGG

Weston--who is owned by trainer Ryan Hanson and Chris Drakos -- completed six furlongs on a fast track in 1:12.77. This is Hanson's first career graded stakes win.

“Boy, I had to work hard for that one," Van Dyke said. "But I’m glad I did. I was happy to win it for Ryan Hanson. He such a kind man and a good horse trainer. And this horse showed some class, too. Ryan told me he never got to paddock him (prior to the race), but he was just standing in there like an old pro. I knew I got there in the end and I’m real glad I did.”

Girther, who floated to 30-1 from a 6-1 morning line for trainer Peter Miller, finished about three lengths clear of Ambivalent, who was followed across the wire by Sonic Brees. However,  Ambivalent was subsequently disqualified to fourth after stewards' ruled he had interfered with Sonic Brees in the stretch.

Weston, a gelding, is the first stakes winner for freshman sire Hit It a Bomb. Drakos plucked Weston out of the 2019 Keeneland September yearling sale for a mere $7,000. He has earned $120,000 with his two wins.

"He broke sharp, just like we wanted him to, but then it looked like he just sat there for a minute," Hanson said. "I got a little nervous when he got shuffled back, but then he got back up there and fought on. The time was not very impressive, but that doesn’t matter. I didn’t think we were going to win it."

"We’ll see how he looks tomorrow and let him tell us what to do," Hanson said.