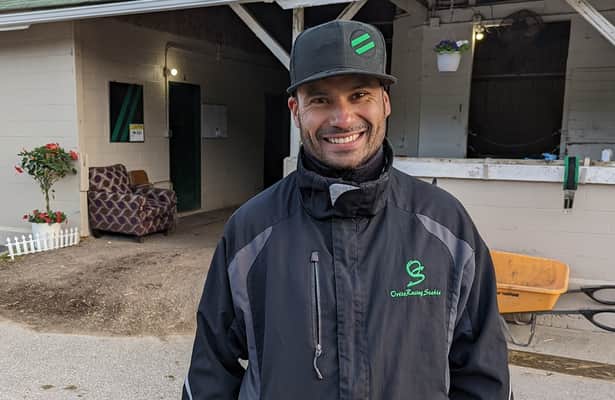 Last season’s breakout meet at Oaklawn fueled a career year in 2022 for trainer John Ortiz, who returns to Hot Springs with a projected 36-horse lineup long on quality.

“We’re very grateful and thankful that we were able to get 36 stalls at Oaklawn this year,” Ortiz said. “We have a pretty good amount of horses in the pipeline. I think we’re just going to be very patient and be entering horses correctly, just to make sure we get the good win spots. Quality has definitely gone up as well, but last year we had very good quality of horses.”

Ortiz smashed his previous single-season Oaklawn personal bests in 2021-22, finishing tied for fourth in victories (27), third in purse earnings ($2,670,871) and second in stakes victories (four). Ortiz rode that momentum to his first career training title last summer at Ellis Park and entered Monday with 66 victories and $5,157,323 in purse earnings overall this year. Previously yearly bests for Ortiz, who saddled his first winner in 2016, were 53 and $2,614,398, respectively. Ortiz, 36, was an assistant under Kellyn Gorder before striking out on his own.

Among the horses already training in Hot Springs for Ortiz are 2022 Arkansas Derby runner-up Barber Road, Arkansas-bred standouts Gar Hole and Whelen Springs – both stakes winners at the 2021-22 meeting – stakes-placed Ice Orchid and Novel Squall and Happy Is a Choice, who is entered in Friday’s $150,000 Advent Stakes for 2-year-old sprinters.

Gar Hole, a 4-year-old, dominated state-bred sprinters in the $150,000 Nodouble Breeders’ Stakes last March. Three-year-old Whelen Springs ripped off three consecutive sprint victories at the end of the meeting, including the $150,000 Rainbow Stakes against state-breds and the $150,000 Bachelor Stakes in open company.

“Obviously, we’re looking at the Arkie-bred allowances coming up,” Ortiz said. “We’ll have to run both against each other because there will be no age difference. That’s OK. I don’t mind two horses competing at the same level.”

Ortiz said multiple Oaklawn winner Joyful Cadence is pointing for the $125,000 Sugar Swirl Stakes (G3) for female sprinters, 3 and up, Dec. 31 at Gulfstream Park. She will then target stakes races late in the Oaklawn meeting, Ortiz said. Another older male sprinter for Ortiz, Heart Rhythm, was runner-up in the $175,000 Thanksgiving Classic Stakes Nov. 24 at Fair Grounds. Ortiz claimed Heart Rhythm, a two-time allowance winner last season at Oaklawn, for $100,000 Sept. 15 at Churchill Downs.

“I think the horse is probably looking for more ground,” Ortiz said. “He will make his way from Louisiana to Oaklawn at some point.”

Ortiz’s first scheduled runner of the 2022-23 Oaklawn meeting is unraced Madly Dancing, a $525,000 Keeneland September Yearling Sale graduate, in Friday’s third race for 2-year-old fillies. Madly Dancing, by Curlin, is a half-sister to Oceanwave, runner-up in the $400,000 Fantasy Stakes (G3) for 3-year-old fillies at 1 1/16 miles in 2015 at Oaklawn.

“We always set goals,” Ortiz said. “We want to double up on everything that we do every year, so a couple of extra wins and finishing in the top three in the standings would be a goal. I never worry about earnings. So as long as we win, I know that’s the reward. Obviously, just trying to outdo what we did there last year. More wins, happier horses and happier owners and continue the success.”