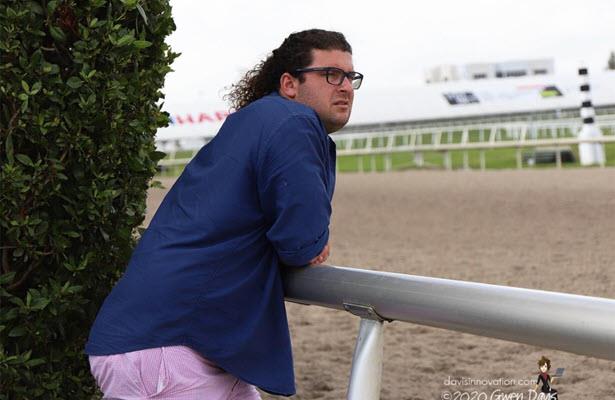 That is what Saffie Joseph Sr. thought when Saffie Joseph Jr. told him of his plan to leave their homeland of Barbados to train Thoroughbreds in South Florida.

The son spoke of his ambition to rank among the finest trainers in the world, if not the best. At 22 years old, Joseph Jr. had already become the youngest conditioner in Barbados history to produce a Triple Crown champion when Areyoutalkintome accomplished the sweep in 2009. The son yearned for the opportunity to develop a horse worthy of the Kentucky Derby, and he could not see a path to Churchill Downs from Barbados.

The father knows the industry well, having been a trainer, owner and breeder. He tried to reason with his son. Did he have any idea how good some of the trainers are that he would compete against? Did he understand how talented and deep their barns are? They needed horses to train. How could they possibly attract owners when they were strangers in a strange land?

These were practical questions, to be sure. But the father soon recognized that a young person’s dreams are meant to be nurtured, not dashed. He was all in by the time Joseph Jr. made the move, arriving in South Florida with two horses in 2011.

Nine years later, Joseph Jr. clearly ranks among the nation’s most promising young trainers. Through Feb. 25, he ranked third behind veterans Todd Pletcher and Michael Maker in the trainer standings for Gulfstream Park’s Championship Meet with 28 victories, trailing Pletcher by five wins and Maker by two. He was winning at a torrid 27-percent clip, highest among the top five trainers. His horses won at a 26-percent rate last year with 95 from among 370 starters for earnings of $3,877,156.

His soaring fortunes include three 2020 Kentucky Derby hopefuls -- Chance It, Ny Traffic and Disc Jockey. He has a solid Kentucky Oaks candidate in Tonalist’s Shape.

When Joseph Jr. reflects on his journey, he understands his father’s fierce resistance. The points his father made resonate as never before.

“You look back and it was crazy,” he said during an interview at his Gulfstream Park home base. “You come here, you don’t know anyone and it’s an entirely different system. It was hard to get to this point.”

Joseph Sr. will be forever grateful that his son overrode his objections and saw beyond Barbados to chase a childhood dream.

“It seemed impossible,” the father said. “It turned out not to be impossible.”

Chance It, a Florida-bred son of Currency Swap owned by Shooting Star Thoroughbreds, comes off a victory in the Mucho Macho Man and may represent the trainer’s best Derby prospect. He faces an acid test when he opposes headliner Dennis’ Moment, still highly regarded despite his Breeders’ Cup Juvenile stumble, in the Grade 2, $400,000 Fountain of Youth Stakes on Saturday at Gulfstream.

Chance It excelled in the Florida Sire Stakes Series last year, capturing the $100,000 Dr. Fager and the $400,000 In Reality. The latter was run at the same 1 1/16-mile distance as the Fountain of Youth. He displayed patience and heart in the Jan. 4 Mucho Macho Man, his first race outside of state-bred competition. He rated kindly for jockey Tyler Gaffalione before squeezing through a narrow opening inside and out-slugging As Seen On Tv in a prolonged stretch duel to prevail by a head.

Joseph Jr. is cautiously optimistic about Chance It’s chances in the Fountain of Youth. The race offers Derby qualifying points to the top four finishers on a 50-20-10-5 basis.

“Things don’t always go to plan,” he said. “But if Chance It runs his race, he’s an exceptional horse.”

His management of Chance It reflects the influence of his father, who remains an important part of the outfit in his “retirement.” Joseph Sr. gained a reputation for developing older horses by not asking for too much too soon. The decision was made to have Chance It skip the Breeders’ Cup last November.

“We wanted to have a good horse for the 3-year-old year,” Joseph Jr. said. “Why clash heads when we could clash heads later and let him develop more?”

He also has Ny Traffic on the Road to the Derby after that New York-bred son of Cross Traffic ran third in the second division of the Feb. 15 Risen Star Stakes at Fair Grounds to secure 10 Derby qualifying points.

The Louisiana Derby, Florida Derby and Wood Memorial are under consideration for Ny Traffic, owned by John Fanelli, Cash Is King, LC Racing and Paul Braverman. Joseph Jr. teamed with Fanelli when Math Wizard, acquired out of a $25,000 claiming race, pulled a stunning upset in the $1 million Pennsylvania Derby at Parx Racing last September to provide his first Grade 1 victory.

Joseph Jr., whose path to success points to him as a clever risk-taker, intends to take an all-or-nothing shot with Disc Jockey by entering him in one of the major Derby preps. The son of Bodemeister, claimed for $35,000 last September, has much to prove after placing second in the Feb. 17 American Fabius Stakes at Gulfstream. Still, the trainer sees a 3-year-old that has significantly improved and is worthy of a chance.

Tonalist’s Shape ranks seventh with 10 qualifying points for the Oaks. She made a successful 3-year-old debut in the Feb. 1 Forward Gal Stakes for Slam Dunk Racing, Doug Branham and Legacy Ranch Inc.

As Joseph Jr. surveys his deep 68-horse operation, he repeatedly expresses his gratitude to owners who increasingly believe in him. He is immensely proud of the team he has assembled, one that he insists cannot be outworked in a relentless drive to the top.