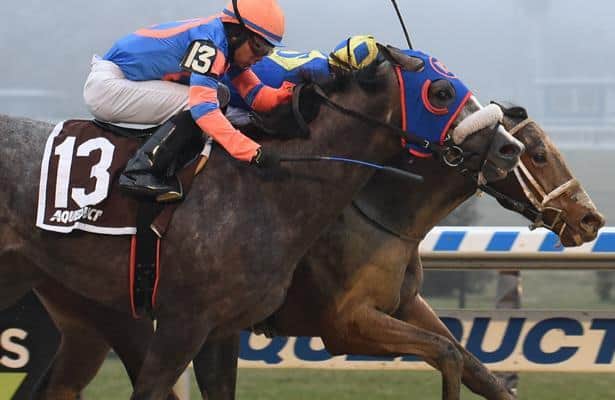 Bank on Shea just got his nose down Saturday to edge Dream Bigger in the New York Stallion Series' $500,000 Great White Way at Aqueduct.

This NYSS division, restricted to 2-year-old colts and geldings sired by New York stallions, lined up a field of 12 going seven furlongs on a sloppy, foggy afternoon at Aqueduct

Colormepazzi and Moonachie went out to the early lead, going a half-mile in :46.97. The Jeremiah Englehart trainee Moonachie got a head in front coming around the turn, with 6-5 favorite Dream Bigger in pursuit on the outside.

The Rudy Rodriguez-conditioned Dream Bigger – who entered off a local win Nov. 17 in the Notebook Stakes – finally put away Moonachie with a furlong to go. Meanwhile, Bank on Shea closed hard on the inside under jockey Jose Lezcano.

Dream Bigger and jockey Manuel Franco drifted down the track in the final 50 yards, coming into close quarters with Bank on Shea. The Jason Servis-trained Bank on Shea held strong and won a photo finish.

"He had never run before on a wet track, but the horse was doing so well in the morning," said Henry Argueta, assistant to Servis. "We were expecting a big race."

"It was a good trip," said Manny Franco, who rode Dream Bigger, "but he was going seven-eighths for the first time and he got a little bit tired. The other horse came running hard. It was a tough beat.

"I thought he was going to give me more when I started riding hard, but I had to make him switch [leads]. He's still a little green."

Shea D Boy’s Stable campaigns Bank on Shea, a Central Banker colt. He debuted July 14 at Saratoga with a maiden score, then ran third last month in the Notebook before a lucrative victory Saturday in his third start.