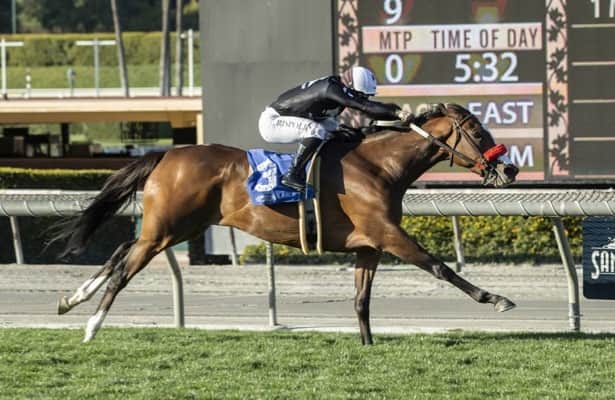 Richard Baltas has two outside chances in Monday’s Grade 1 Gamely Stakes, one with probable pace factor Going to Vegas and another with likely closer Bodhicitta, each of whom has paid his way for the meet’s fifth-leading trainer with 27 victories.

Going to Vegas is fresh from a front-running victory in the Santa Ana Stakes (G3) at a mile and a quarter on March 27, while Bodhicitta, second at 14-1 in last year’s Gamely, makes her first start since a disappointing eighth in the Matriarch at Del Mar (G1) six months ago, last Nov. 29.

“Both are doing well,” Baltas said of Going to Vegas, a 4-year-old daughter of Goldencents, and Bodhicitta, a 5-year-old English-bred mare.

“Everything looks good. The race could set up for Bodhicitta. She just needed a rest,” Baltas said in explaining her lengthy absence.

Baltas also has two in Monday's Shoemaker Mile (G1), where Next Shares and Whisper Not each seek their first Grade 1 victory.

Next Shares was supplemented to the Shoemaker for $6,000, while Whisper Not is coming off a game head victory in the San Francisco Mile (G3) on April 24.

“It’s not the toughest race in the world,” trainer Richard Baltas said. “Whisper Not is doing well, and Next Shares is doing really well. He may be getting a little long in the tooth (at age 8) but we’ll see what happens.”