Baltas: 'No telling what we’ve got' with filly Venetian Harbor 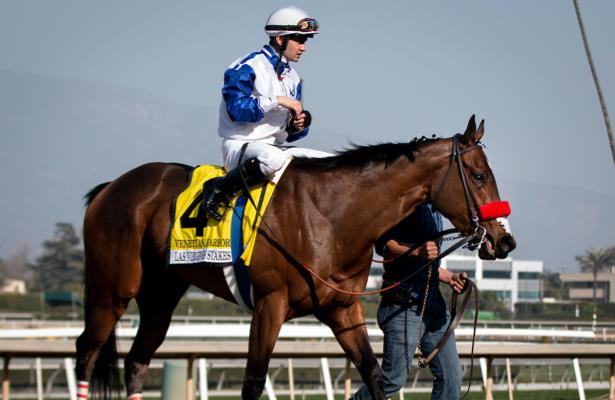 In her first recorded work since daylighting her competition by 9 ¼ lengths in the Feb. 8 Las Virgenes Stakes (G2), the Richard Baltas-trained Venetian Harbor drilled a half mile in a bullet 46.20 on Friday at Santa Anita Park under Flavien Prat.

“I was very happy to see she was so relaxed,” said Baltas, the meet’s leading trainer through 28 racing days with 19 wins. “I told Flavien my only concern was to keep her relaxed -- within herself. I looked at the watch and it said 46 and one. I’ve never had a horse do that.”

Although the Santa Ysabel (G3), at a mile and one sixteenth, had been considered, Baltas said the 3-year-old daughter of Munnings would likely pass the race in favor of the April 4 Santa Anita Oaks (G2) going 1 1/16 miles.

"I’ve had some good ones, but yes, she’s the best filly I’ve ever had," Baltas said. "I’ve never had a horse do what she’s done and if we can keep her healthy and sound, there’s no telling what we’ve got.”

Bred in Kentucky, Venetian Harbor, who is out of the Street Cry mare Sounds of the City, debuted at five furlongs on turf Nov. 15 at Del Mar, finishing a close second as the even money favorite. A 10 ¾-length maiden winner at 6 ½ furlongs on dirt here Dec. 29, she stretched out for the first time in the Las Virgenes. Although she was a bit keen in the early stages, Venetian Harbor demolished her competition as the 1-5 favorite.