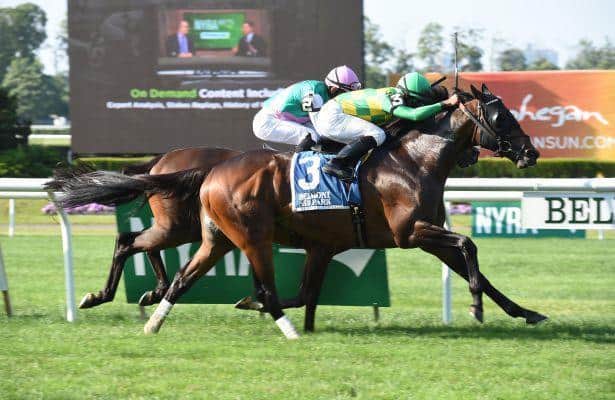 Trained by Hall of Famer Bill Mott, the 7-year-old Stormy Atlantic bay was sent to post at 7-1 as the longest shot on the board in the 1 1/16-mile Mellon turf route for older horses without a graded-stakes win this season.

Ballagh Rocks settled in second position as Largent, under Luis Saez, marked out splits of 24.38 and 48.47 seconds on the firm turf with Breaking the Rules and Olympico following their early foot down the backstretch. Largent continued to dictate terms into the final turn as Ballagh Rocks inched into contention with Olympico ranging up on the outside late in the turn.

Ballagh Rocks angled off the inside in the stretch run and took command 3/16 from the finish and powered through the wire a 2 1/4-length winner under a strong hand ride in a final time of 1:40.23. Largent stayed on strong for second, a length to the better of Devamani.

Rounding out the order of finish were 8-5 post-time favorite Breaking the Rules and Olympico. Rose's Vision was scratched.
The victory marked the fourth stakes win of the meet for Alvarado, who captured the Grade 3 Schuylerville with Dayoutoftheoffice; the Perfect Sting with Feel Glorious; and the Prioress (G2) aboard Frank's Rockette.
Alvarado said he followed Mott's instructions to the letter.
"Bill doesn't give too many instructions, but he told me today that Luis was going to go so make sure to put the horse right at his hip and take it from there," said Alvarado. "So, that's what I did and I'm just glad I had enough horse left to run him down. He kicked on to the wire.
"He was feeling pretty good today in the paddock," added Alvarado. "He's a happy horse, but today he was a little extra happy and he showed it in the race."
Mott said Ballagh Rocks scratched out of a recent start and he decided to supplement the horse to the Lure as the horse was training well since his last-out second, defeated just a nose, in an optional-claiming event on July 4 on the Belmont turf.
"I had him in a two-other-than optional claimer and it came off the turf, so we scratched. He was doing good and I started looking at this race and I thought why not put him in here," said Mott. "I just thought let's give him a shot. They don't give milk and they don't lay eggs; you have to run."
Bred in Kentucky by Turner Breeders, Ballagh Rocks banked $46,750 in victory while improving his record to 24-7-5-5. He paid $17.
Live racing will now move to Belmont Park for the 27-day fall meet, featuring 38 stakes worth $5.58 million in purse money, that will kick off on Friday, Sept. 18 and run through Sunday, Nov. 1.
Ballagh Rocks Saratoga Race Course Lure Lure (2020)