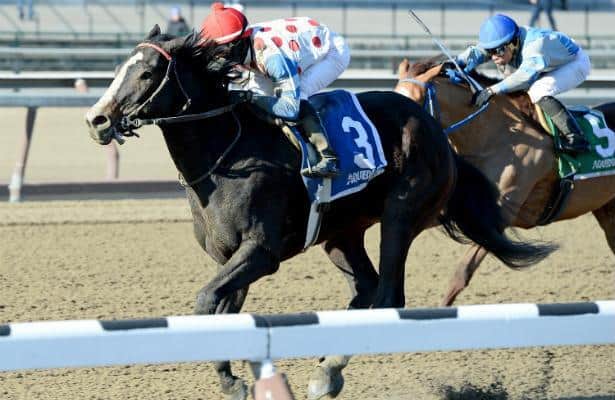 Trainer Charlie Baker will hope to take advantage of his mares' agreeable running styles when he saddles the speedy Atlantic's Smile and the late-closing Make the Moment to take on graded stakes-placed Willet in the $100,000 Union Avenue for New York-bred fillies and mares 3-years-old and up at 6 ½ furlongs on Thursday at Saratoga Race Course.

Francis Paolangeli's Atlantic's Smile picked up her first victory of the year last time out, winning the Arctic Queen for New York-breds by a nose on July 31 at Finger Lakes, a race Baker said was important for both the 5-year-old mare and her yearling half-sister Tiznow's Smile, by Tiznow, who was consigned for the Saratoga Selected Yearlings sale at Fasig-Tipton.

"We wanted to win a stakes with her before the sale and then point towards this race," said Baker. "It worked that she did get a stakes win. Everything's worked out OK so far for her. She's doing good coming into the race. She's speedy and the other filly's a closer, so they should complement each other."

Prior to the Arctic Queen, Atlantic's Smile turned in three consecutive second-place finishes, twice behind multiple stakes winner Isabelle. Most recently, the daughter of Stormy Atlantic failed to hold off Make the Moment, Baker's "other filly", finishing second to her stablemate by a neck in an optional claiming event in March at Aqueduct.

Make the Moment, a 5-year-old mare by Indygo Shine, followed up that effort with a second-place finish in the Dancin Renee, 7 ¼ lengths behind eventual Grade 2 Honorable Miss winner La Verdad, trained by Linda Rice.

"Make the Moment is training as good as she's ever trained coming into a race," Baker said. "She had a good race at Belmont, where she finished second to that good filly of Linda's. We're hoping she runs her race. We like her chances."

Atlantic's Smile is set at morning-line odds of 6-1 and will break from post 6 with Manny Franco in the saddle, while Make the Moment, 5-1, will leave from post 2 under Irad Ortiz, Jr.

Winner of the 2012 and 2013 editions of the Union Avenue, Willet will be making her first start since posting a 1 ½-length score in the Interborough at Aqueduct in January. At 7, the daughter of Jump Start boasts nine wins from 23 career starts, finishing in the money on 20 occasions, to amass $746,900 in earnings over her four-year career.

Installed as the 2-1 morning-line favorite, Willet, owned by Charlotte Assoulin and her trainer Jimmy Iselin, will break from post 7 under Joel Rosario.