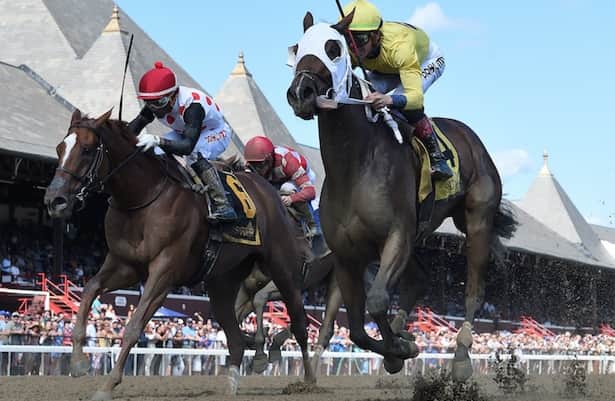 Standing outside his barn on Saratoga’s Oklahoma training track side Sunday morning, trainer Charlton Baker said how much he enjoys training at the Spa. But will have to return to Belmont Park once the 40-day summer meet concludes Monday.

Baker’s affinity for Saratoga is well founded, as the conditioner was one of only 12 trainers to register at least eight wins during the prestigious meet entering Sunday action, carrying an 8-2-2 record with 26 starters into the day.

On Saturday, Baker was credited with his third career graded stakes win and first since 2016 when P. Dale Ladner’s Cilla bested favorite Souper Sensational by a half-length to win the Grade 2, $250,000 Prioress for sophomore fillies sprinting six furlongs. The win was a technicality for Baker; he saddled the Louisiana-bred for trainer Brett Brinkman, who did not take out a license in New York but was on hand to witness the victory that earned Cilla an 88 Beyer.

Although Brinkman remains Cilla’s trainer, Baker is the conditioner of record, officially tallying his first graded stakes score since Joking won the 2016 Vosburgh (G1) and True North (G2). A connection with former Baker employee Lisa Whitaker, who now works for Brinkman, helped facilitate what turned out to be a winning move for all involved.

“That was impressive. She’s a very nice-looking filly to start with and she looks like she has come class to her, and it was nice to see her come in and get the win for them,” Baker said. “One of my old employees works for him, so Brett called him a couple of weeks ago about it. He wanted to come but wasn’t sure what to do, so we talked about it and handled it that way.

“I get credited with it, but that’s all it is,” Baker added with a laugh. “But Brett did the work.”

Baker also has enjoyed Saratoga success with his own stock, highlighted by Happy Face Racing Stable’s Gold Panda, who improved to 2-for-2 at the meet after registering a 2 1/4-length score in a seven-furlong allowance contest on Sept. 3 over the Saratoga main track.

The 3-year-old Goldencents gelding did not make his debut until July when running third in a 6 1/2-furlong sprint at Belmont. Gold Panda followed with a maiden-breaking 5 1/2-length win on Aug. 19 over a sloppy and sealed Spa track before winning his second consecutive start and garnering an 88 Beyer for his Friday victory over a fast track.

“He’s getting better every start. We figured we’d give him a little bit of time before his next race and go from there. He’s definitely developing,” said Baker, who said his next start will likely be a two-other-than at Belmont. “Eventually, if he keeps on progressing, I think he’s headed to (stakes) company. He has the mind to do it and the ability. He can be a nice horse.”

Gold Panda, a $65,000 purchase at the 2019 Fasig-Tipton Saratoga New York-Bred Yearling Sale, was bred in the Empire State by T/C Stable. Baker said the patience in not racing him as a juvenile has paid off as Gold Panda continues to progress.

“He just needed to mature. As a 2-year-old, we wasn’t ready to go. We gave him some time and let him mature and brought him back this year and he’s got better and better,” Baker said. “He ran a good race the first time out and then he came back and won. He learned from the first, and I think he’s just going to go forward from there.”