Baffert’s Derby owners: No word on when horses may be moved 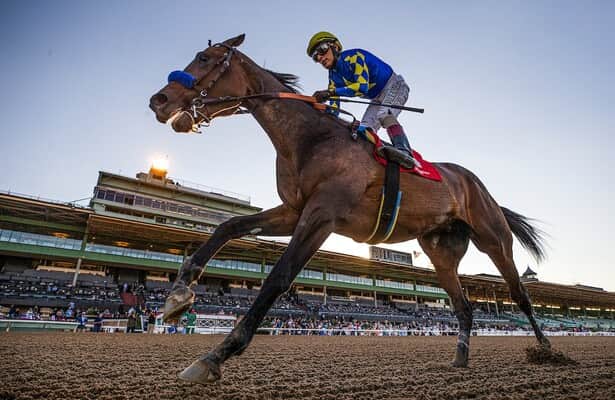 The owners of this year’s Kentucky Derby prospects trained by Bob Baffert continued to give no indication on when and where those horses could be transferred if they hope to qualify for the first leg of the Triple Crown.

In recent weeks Horse Racing Nation has reached out to several owners of Baffert’s Derby prospects and received little in response.

Tom Ryan of SF Racing, the lead owner for most of Baffert’s Derby prospects, requested all questions from Horse Racing Nation be sent via email. After receiving the queries Ryan declined to comment. He instead referred to social media for any additional insight.

On Tuesday, Madaket Stable's Sol Kumin would not comment on any future plans with regard to Baffert. He only noted both Newgrange and Pinehurst were running Saturday in seven-figure races, "and we will try and focus on those for now and try and enjoy them."

The company line among Baffert’s owners since his Derby suspension has been that any potential transfer to another trainer probably would not come until before the final round of Derby preps, which are virtual automatic qualifiers for the top two finishers. Those races begin March 26 with the UAE Derby (G2) at Meydan and the Louisiana Derby (G2) at Fair Grounds. In each prep, 100-40-20-10 points are awarded to the top four finishers, if eligible. There are six other races of the same value April 2 and 9.

Previously, Baffert has said he typically would start a horse in the Kentucky Derby only if it finishes finishes first or second in one of those last major preps or perhaps third with a troubled trip. He noted that last year on the Ron Flatter Racing Pod ahead of the Arkansas Derby and reiterated it to HRN last month at Santa Anita.

In last year’s Arkansas Derby, Concert Tour finished a disappointing third as a 2-5 favorite. Despite having the requisite points, he did not contest the Derby and went instead to the Preakness, finishing ninth.

Horses trained by Baffert are banned by Churchill Downs from qualifying for or competing in the next two runnings of the Kentucky Derby. Baffert’s suspension came after last year’s first-place finisher, Medina Spirit, failed his post-race drug test. On Monday, stewards in Kentucky formally stripped Medina Spirit of the Derby win and awarded the victory to runner-up Mandaloun.

While that verdict and accompanying 90-day suspension of Baffert will be appealed, Baffert’s horses are still ineligible to compete in this year’s Kentucky Derby. That leaves the owners of Baffert’s Derby prospects to look for another trainer if they hope to make the 20-stall starting gate on May 7.

When announcing Baffert’s Derby suspension last spring, Churchill Downs noted any qualifying points associated with the top-four finish of a Baffert horse in prep races “will be vacated.” Churchill explicitly stated that horses would not be eligible if transferred to anyone associated with Baffert, such as assistant Jimmy Barnes.

Baffert has 15 horses listed in the Kentucky Derby futures markets in Nevada. Blackadder, winner of the Feb. 12 El Camino Real Derby, does not have a price listed. Below are the current best futures odds and status of Baffert’s Kentucky Derby prospects:

Baffert's Cave Rock leads a field of 8 in American Pharoah
Easily the most impressive juvenile this past summ...

War Like Goddess takes on males in Grade 1 Joe Hirsch
For the past two seasons, George Krikorian’s War L...