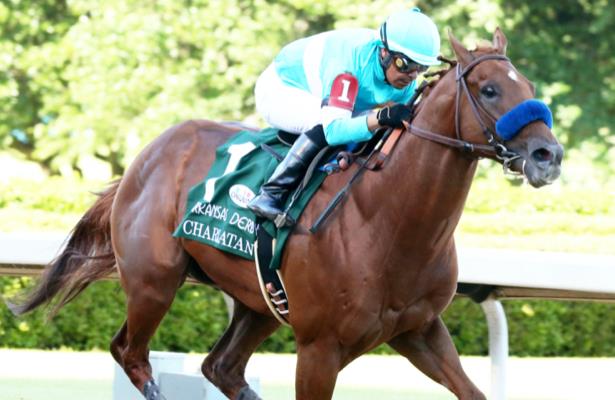 Charlatan worked five furlongs Monday morning in 1:00.80 at Santa Anita Park, but it will still be a week more before Bob Baffert makes the call on his next race spot.

Baffert initially began considering Charlatan for the June 20 Woody Stephens (G1) when he still had another unbeaten 3-year-old, Nadal on target for the Belmont Stakes that same day in New York. Since then, of course, Nadal suffered an injury that led to his early retirement.

“I still have a decision. We’re looking at both races there,” Baffert said of Charlatan. “I think his next work will decide — it will be more serious — where we go.

“Today was more of a maintenance work, just cruising.”

The Woody Stephens would back Charlatan up from the 1 1/8 miles he ran in the Arkansas Derby (G1) to seven furlongs. Then, presumably, the Haskell (G1) serves as the final prep before his run at the Sept. 5 Kentucky Derby.

The Belmont Stakes, meanwhile, is where Baffert is leaning given he’d no longer be sending two undefeated stablemates against one another. The first leg of the Triple Crown series runs nine furlongs around one turn with the Haskell also going that distance later this summer.

Hanging over connections is the impending arrival of Charlatan’s split sample from the Arkansas Derby. Should it return positive — reportedly for an overage of lidocaine — the Speightstown colt stands to be disqualified.

Even without the earnings associated with the Arkansas Derby, Charlatan stands to make the Belmont Stakes field. In the event it attracts more than 16 entries, a committee will determine three starters best fit to run and contingent upon money earned.

Charlatan registered back-to-back triple-digit Beyer Speed Figures in his debut and allowance races at Santa Anita before taking them all the way in the Arkansas Derby’s first division. Nadal won the second.

A partnership including SF Racing, Starlight Racing and Madaket Stables campaigns Charlatan, purchased for $700,000 as a yearling.