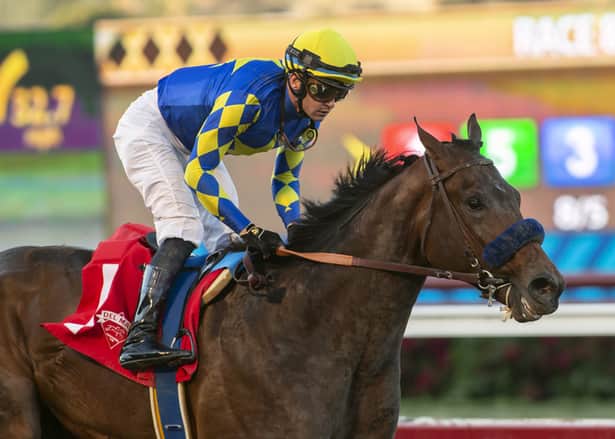 Hall of Fame trainer Bob Baffert will send out Messier and Barossa as he seeks his eighth consecutive victory in the Grade 2, $300,000 Los Alamitos Futurity Saturday.

The contest at 1 1/16 miles for 2-year-olds is the ninth of 10 races on the next-to-last day of the winter thoroughbred meet at Los Alamitos. Post time Saturday is 12 p.m. PST. Scheduled post time for the Futurity is 3:58 p.m. PST.

A son of Empire Maker and the Smart Strike mare Cherokee Past has won two of three and earned $105,600. After finishing second as the odds-on favorite in his debut June 27 at Los Alamitos, the Canadian bred has gone back-to-back, prevailing by a combined 10 lengths. In his most recent appearance, Messier won the Bob Hope Stakes (G3) by three lengths Nov. 14.

An Into Mischief colt out of the Flower Alley mare Bouquet Booth, Barossa, who has the same ownership group as Messier, finished ninth of 11 in the Breeders’ Cup Juvenile Nov. 5.

He’s won once in four starts and earned $69,200. He broke his maiden at eight furlongs two starts back at Santa Anita.

Trainer Doug O’Neill, who was second in the 2020 Futurity with The Great One, will be represented by Durante and Slow Down Andy.

A son of Distorted Humor and the Pioneerof the Nile mare Seahawk Girl, Durante graduated as the 1-2 favorite in his most recent start at one mile Nov. 14. He’s earned $54,700 in three outings for Roadrunner Racing and William Strauss.

A California bred son of Nyquist and the Square Eddie mare Edwina E, Slow Down Andy is 1-for-2 for owner-breeder J. Paul Reddam’s Reddam Racing LLC. The chestnut colt won by nearly five lengths in his debut Oct. 9, then was second as the 11-10 favorite in the Golden State Juvenile four weeks later. He’s banked $69,850.

Completing the field is Olympic Legend, a Street Boss colt out of the Mingun mare Brilliant Future.

Owned by breeders Lawrence Opas and Frank Sinatra and trained by Luis Mendez, Olympic Legend is the only member of the field with a win at Los Alamitos. He upset a field that included Messier when nearly 11-1 June 27. He’s been idle since finishing a distant third in the Capote Stakes locally Sept. 18.