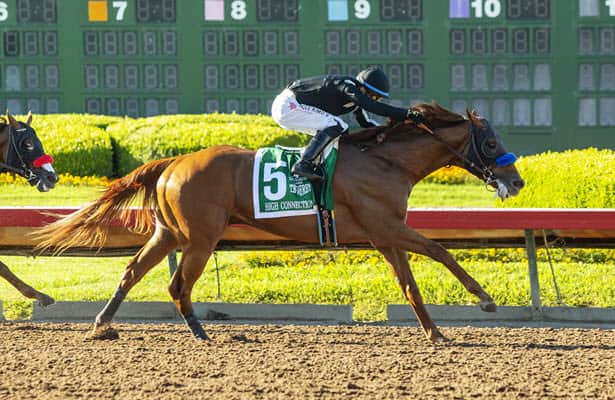 The $125,000 Los Alamitos Derby on Saturday was a virtual match race from the start between favorite Slow Down Andy and second-choice High Connection. In the end, it was High Connection who proved too strong and won by 1 3/4 lengths, providing trainer Bob Baffert a second win on the card.

High Connection entered off back-to-back runner-up finishes, including the June 11 Affirmed (G3) at Santa Anita, both while with trainer Sean McCarthy. Baffert guided the Connect colt to a 10-length debut win at Santa Anita in March before McCarthy took over training duties during Baffert's 90-day suspension.

“He was really impressive breaking his maiden, but then he kind of fell back,” Baffert said of High Connection. “We really didn’t know how long he wanted to go. But then he worked great (on Sunday)...You could see in the paddock he was ready to go today.”

Baffert completed his suspension on Sunday. Earlier on the card, he won a maiden race with Rhetoric in his first race since the return.

“I’m glad to be back, and what a way to come back. I love this place.," Baffert said. "The first time I came to Los Alamitos was when I was 14. Quarter horses were my life and I knew if I could make it at Los Alamitos I knew this was it."

Slow Down Andy, who was making his first start since winning the Sunland Derby (G3) on March 27, was slated to run in the Kentucky Derby for trainer Doug O’Neill this spring but fell ill and was forced to miss the entire Triple Crown series. He won the Los Alamitos Futurity (G2) last December and was attempting to become the first Futurity-Los Alamitos Derby winner.

Sent off the even-money favorite, Slow Down Andy and Mario Gutierrez raced on the inside as High Connection and Juan Hernandez matched strides through opening fractions of 22.46 and 46.48 seconds. They remained just a head apart after six furlongs in 1:10.58.

High Connection then began to edge away in the lengthy Los Alamitos stretch as Slow Down Andy lugged in before straightening out. High Connection upped his lead to a length at the eighth pole and then continued motoring to the wire to win in a final time of 1:48.98 for 1 1/8-miles on a fast track.

“Juan said he brought his ‘A’ game today, and he needed it,” Baffert said. “Slow Down Andy, he was tough. He was relentless.”

Another winner by Connect @LanesEndFarms

Slow Down Andy finished four lengths clear of third-place finisher Win the Day, also trained by O’Neill. Doppelganger, also trained by Baffert, was close to the pace before fading to fourth.

A $290,000 auction purchase last year, High Connection is owned by Prince Sultan Bin Mishal Al Saud. Baffert said he did not have any immediate plans for the colt but that he is looking for big things in the future.

“I don’t know yet what we’ll do with him next, I’m just kind of soaking it in,” Baffert said “But down the road he’s going to get better and better. At one point we’d like to take him to (the) Saudi (Cup).”