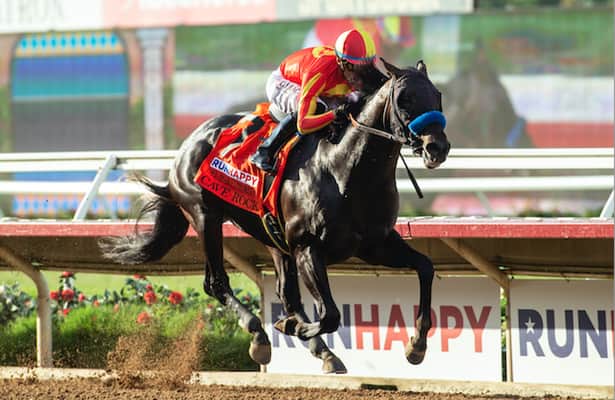 A Breeders’ Cup “win & you’re in” qualifier, the American Pharoah winner will earn a fees-paid berth into the $2 million Breeders’ Cup Juvenile Nov. 4 at Keeneland.

A dark bay or brown colt by Arrogate out of the Bellamy Road mare Georgie’s Angel, Cave Rock is owned by Mike Pegram, Karl Watson and Paul Weitman and will be ridden for the third time by Juan Hernandez.

Baffert, who will saddle half the field in the race named in honor of his 2015 Triple Crown Champion, will likely dominate on Saturday as his Hejazi, second as the favorite in a pair of 5 1/2 furlong races on Aug. 20 and Sept. 10, should be very tough with Mike Smith riding back.

Second, beaten 1 1/4 lengths by stablemate and next-out turf stakes winner Speed Boat Beach Sept. 10, Hejazi earned an American Pharoah-best last out Beyer of 100 and should appreciate a route of ground.

Purchased for $3,550,000 by Zedan Racing Stables Inc. out of a 2-year-old in training sale this past May, Hejazi is by Bernardini out of the Medaglia d’Oro mare G Note.

Rounding out Baffert’s Fearsome Foursome is Gandolfini, who broke his maiden at first asking going one mile at Los Alamitos on Sept. 17.  With Ramon Vazquez sticking with National Treasure, Gandolfini will be ridden by Edwin Maldonado.