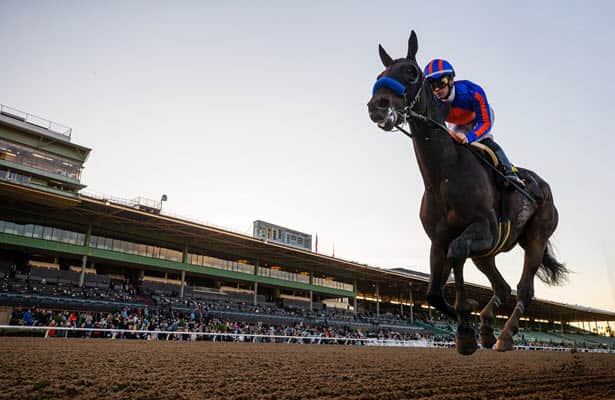 With a well-meant Park Avenue providing a target from the opening bell in Saturday’s Grade 3, $200,000 La Cañada Stakes at Santa Anita, heavily favored As Time Goes By stalked her to the far turn, took command a quarter mile from the money and prevailed in a thoroughly dominant New Year’s Day performance, winning by 13 1/2 lengths as Flavien Prat notched his second consecutive stake win and his fifth overall on the day.

Conditioned by Bob Baffert, who got his second stakes win of the day and who was available via telephone from the Rose Bowl in Pasadena, As Time Goes By got a mile and one sixteenth in 1:44.31.

“This filly keeps getting better and better with age," Baffert said. "I’m really excited. She has always been a barn favorite of mine. She’s got that American Pharoah temperament. They seem to be late bloomers and she is getting better all the time. I am expecting big things from her from here. She will stay here, and I think the Grade 1 Beholder would be next for her.”

“I got myself in the race and she was travelling super well and ran great down the lane," said Prat, who added a win in the nightcap to give him six in 10 races. "She settled nice and she had a nice target all the way around, and when it was time to make her run she was there for me.”

On the strength of two recent wins, Park Avenue, trained by John Sadler, was off as the second choice at 7-2 with Juan Hernandez and paid $3.20 and $2.20 while finishing 4 1/4 lengths in front of Moonlight d’Oro.