Baffert takes on Comma to the Top in Underwood 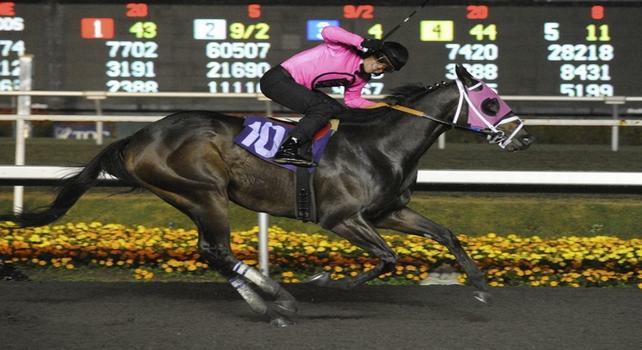 Hall of Fame trainer, Bob Baffert entered a trio – Euroears, Irrefutable and Quiet Invader – in the Underwood, a race he hasn’t won since 1992 (Gundaghia).

This is scheduled to be the second-to-last start of Euroears’ career. The 7-year-old son of Langfuhr and the Heff mare Unky and Ally will be trying to rebound after two subpar performances in Grade I races.

Owned by James and Marilyn Helzer, Euroears was last of eight in the Vosburgh Oct. 1 at Belmont Park, then was again the trailer in the Breeders’ Cup Sprint Nov. 5 at Churchill Downs.

A winner of 10 of 21 with earnings of $1,043,894, Euroears will be making his Hollywood Park debut, but he does have a win and a second in two previous appearances over synthetic surfaces.

Owned by Kaleem Shah Inc., Irrefutable trailed in the Breeders’ Cup Dirt Mile Nov. 5 at Churchill Downs less than a month after finishing second in the Grade I Ancient Title at Santa Anita at the Underwood.

Successful in four of 12 with a bankroll of $266,980, the 5-year-old gray son of Unbridled’s Song and the Kingmambo mare Honestly Darling has been second in his two races over Cushion Track.

Quiet Invader was a decisive winner after a layoff of more than 17 months Oct. 30 at Santa Anita. Owned by the Lanni Family Trust and Bernie Schiappa, the 4-year-old Songandaprayer colt out of the Storm Bird mare Beach Bunny is 3-for-7 with earnings of $105,850.

The Underwood will be Quiet Invader’s third start in a graded race. He was fifth in the Grade II San Vicente last year at Santa Anita, then was third in the Grade III Chick Lang May 15, 2010 at Pimlico.

The horse of the meet during the 2010 season at Hollywood Park, Comma to the Top returns for the first time since finishing last in the Kentucky Derby May 7 at Churchill Downs.

Trained by Peter Miller for Gary Barber, Roger Birnbaum and Kevin Tsujihara, the 3-year-old Bwana Charlie gelding out of the Stormy Atlantic mare Maggies Storm has won six of 14 and earned $778,600.

His biggest victory came in the Grade I CashCall Futurity Dec. 18, 2010, the last of three stakes wins in a six week period for the Florida bred. Before the Futurity, he won the Real Quiet and the Grade III Generous on turf.

M One Rifle is back with open company after finishing third in the California Cup Sprint Oct. 29 at Santa Anita. Owned by breeders Ed Bernstein, Bryan Greenspun, Irwin Molasky and trainer Bruce Headley, the 5-year-old gelded son of One Man Army and the Bertrando mare Leanessa has won five of 16 while earning $503,302.

The most recent local win for M One Rifle was a record-setting victory in the Cool Frenchy Stakes May 11. The dark bay covered the five furlongs in a Cushion Track record 55.98 seconds.

A winner twice in five starts since being claimed for $32,000 May 6, Carbonite will be seeking the first graded win of his career. Owned by Anthony Chacon and Paul Mangini, Jr. and trained by Mike Mitchell, the 5-year-old Aldebaran gelding out of the King of Kings mare Queen Mindy is 8-for-17 lifetime with a bankroll of $258,237. He won the Governor’s Cup when last seen at Fairplex Park Sept. 21.

A 4-year-old Ghostzapper gelding out of the Unbridled mare Miss Salsa, Pacific Ocean has won three of five and earned $93,199. He’s done all of his running over synthetic surfaces, winning twice at Keeneland and the Bold Venture Stakes July 20 at Woodbine.

Canonize will be making his first start since finishing fourth in the 2010 Underwood.

Owned by Jay Em Ess Stable and trained by Ron Ellis, the 5-year-old gelded son of Aldebaran and the Saint Ballado mare Comanche Star has won three of eight and earned $129,184.

Shediak cuts back in distance after finishing a well-beaten third in a Santa Anita allowance at one mile Oct. 21.

Owned by Triple B Farms and trained by Ben Cecil, the 5-year-old French bred gelding has won three of 26 and banked $252,694. He’s by Selkirk and out of the Fairy King mare Shemissa.