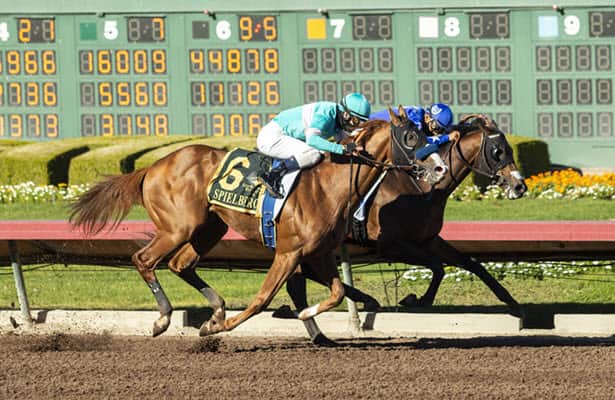 There are no “throw outs” in the Robert B. Lewis Stakes.

Everyone came to play.

In arguably one of the most competitive fields in its 83 editions, dating back to 1935 when it was presented as the Santa Catalina Handicap, Saturday’s Grade 3 test for three-year-olds at 1 1/16 miles looms a major steppingstone to the Santa Anita Derby (G1) on April 3 and awards 10 Kentucky Derby qualifying points to the winner, four to the runner-up, two to the third horse and one point to the fourth.

Drawing an inside post with Medina Spirit and an outside post with Spielberg, Bob Baffert has the field of eight sandwiched, at least on paper. Whether the sandwich contains baloney or filet mignon remains to be seen.

Should Baffert win, it would mark the third straight victory in the Lewis for the two-time Triple Crown-winning trainer. He won last year with Thousand Words and in 2019 with Mucho Gusto. Overall, he has won the race a record eight times, dating back to 1999 with General Challenge.

“I don’t like being stuck inside, and on the outside, you lose ground, but I think we’ll learn more about both horses,” Baffert said. “Right now, we’re just trying to figure out their styles and how good they are. They’ll start separating themselves. Until they go a mile and an eighth, that’s when you’ll really know.”

Coincidentally, Medina Spirit had the number one post position last out when he was second to Baffert’s individual Kentucky Derby Future Book favorite, unbeaten Life Is Good, in the Sham Stakes (G3) Jan. 2, while Spielberg had the outside number six post last out Dec. 19 when the $1 million son of Union Rags won the Los Alamitos Futurity (G2) by a nose over The Great One.

“I’ll just let the riders ride their race and see what happens,” Baffert said of the Lewis, in which Abel Cedillo is aboard Medina Spirit for the third consecutive race and Flavien Prat returns on Spielberg for the second time.

Responding to newly-crowned Horse of the Year Authentic’s victory in the 146th Kentucky Derby being voted the 2020 NTRA Moment of the Year based on results of 3,403 votes cast on Twitter and an online poll, Baffert concurred.

“Authentic deserves that honor,” Baffert said. “He was the most exciting horse to watch last year.”

The Lewis is named for the late owner and philanthropist whose Silver Charm (co-owned by his wife, Beverly) gave Baffert his first Kentucky Derby win in 1997 (he now has six). The Lewises also won the 1999 Derby with Charismatic, trained by D. Wayne Lukas.