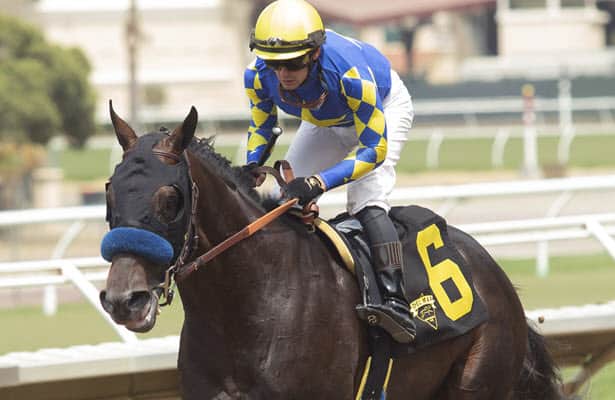 Six colts were entered for Monday’s 74th running of the Grade 1, $300,000 Del Mar Futurity, the traditional closing day feature of the summer meeting.

Six appears to be an operative number for the seven-furlong extended sprint for 2-year-olds that determines the 2-year-old champion of the meeting. If all leave the starting gate it will be the third time in the last four years, and the fifth in the last seven, that a six-pack comprised the field.

And the 2021 running may have more Hall of Fame trainers, per horse capita, than ever before.

Steve Asmussen, Hall of Fame Class of 2016, has dispatched a representative, American Xperiment, from Saratoga. The son of 2015 Futurity winner Nyquist will have had five days to acclimate to Del Mar surroundings leading up to the race after being supplementally entered at a cost of  $10,000.

“He got here Tuesday, he arrived in good order and we’re hoping he runs well,” said Asmussen assistant Sarah Campion, who traveled with American Xperiment. “He broke his maiden impressively at Saratoga, so Steve decided to send him out.”

In his racing debut on July 30, American Xperiment went wire-to-wire over a muddy track in a race taken off the turf and won over six rivals by 5 1/4 lengths.

Mark Casse, Hall of Fame Class of 2020, has Pappacap, winner of the Best Pal Stakes on August 7 in his second career start and second win.

And Bob Baffert, Hall of Fame Class of 2009 – who has 14 Futurity wins on his resume dating back to 1996 – will send out Murray and Pinehurst.

“They both broke their maidens here and they’ve both trained well since,” Baffert said.

Murray, a son of Street Sense who was a $300,000 yearling purchase at Keeneland last September, was a romping 10 ½-length winner on July 25. Pinehurst, a son of Twirling Candy acquired for $385,000 at the same sale, overcame bumping at the start for half-length victory at five furlongs on August 1.

The fifth entrant is Finneus, a California-bred son of Stay Thirsty who was a $200,000 purchase last year. He has one win in three starts and was the runner-up to Pappacap in the Best Pal last out. Trainer Walther Solis helped in the development of some of Baffert’s earliest Futurity winners while serving as manager for the Golden Eagle Farm of John and Betty Mabee.

The sixth is Olympic Legend, a son of Street Boss owned by Larry Opas and Frank Sinatra and trained by Luis Mendez. Olympic Legend broke his maiden in his second career start on June 27 at Los Alamitos.