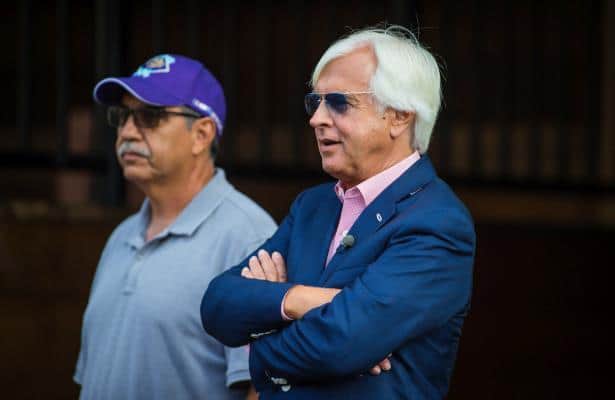 Trainer Bob Baffert will send out a new horse in his stable in Saturday’s Grade 1 Pacific Classic. Hailing from South America and making his first career start stateside will be Roman Rosso, an Argentine-bred with multiple Group 1 wins on his home continent.

The 4-year-old son of Roman Ruler ran one race this year in March, winning his third consecutive top-level race in the Longines Gran Premio Latinoamericano, a nearly a 10-furlong race in which he came from just off the pace to grind out a win. He also wrapped up 2017 in the Group 1 Nacional, a race longer than 12 furlongs, by leading gate to wire and drawing away.

Now owned by Zaur Bifov, Roman Rosso originally began working at Los Alamitos before transferring to Baffert’s Del Mar string at the beginning of the meet. He’s been stretching out in his latest works, most recently breezing seven furlongs in 1:26 last Friday.

“He’s been training well. He’s getting stronger and stronger,” Baffert said Tuesday by phone. “He’s a beautiful horse. He wants to go long, but we’re just getting him – he’s slowly getting acclimated, so I didn’t really want to run him short. He’s not a real a speed-type horse, but I thought he worked well the other day for this race and its’s not coming up really super strong.”

“I was thinking Brubaker with him but I’m going to run him in the big one this week,” Baffert said.

Baffert’s other Pacific Classic entrant is Grade 2 winner Dr. Dorr, who is owned by his wife, Jill. Dr. Dorr was also under consideration for the Harry F. Brubaker, but Baffert said he liked Dr. Dorr’s six-furlong work in 1:14 Tuesday morning.

“Yeah, you know what, he worked today and I liked the way he worked,” Baffert said Tuesday. “I was going to maybe go to the Brubaker but I thought I’m going to enter him today, see how he is tomorrow.”