Baffert leaning to Travers next for Uncle Chuck 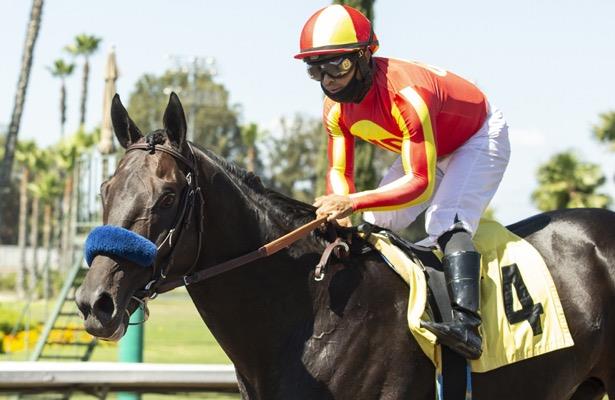 Although the Uncle Mo colt did not debut until June 12 and has run only twice in his career, Baffert thinks he is primed to take a massive step up in class by competing in the Aug. 8 Travers Stakes at Saratoga Race Course.

“I’m giving it a hard look because I think this horse is a phenomenal horse,” Baffert said. “He’s still very green, but the raw talent is off the charts with him.”

He noted that his other option is the 1 1/16-mile Shared Belief Stakes on Aug. 1 at Del Mar. But he emphasized that he is looking at the Travers “more seriously.”

He said of the “Mid-Summer Derby”: “It’s a big step. It’s a million-dollar race. It’s prestigious.”

The Travers, typically run in late August, was moved to earlier in the month to serve as the last major prep for the rescheduled Sept. 5 Kentucky Derby.

Uncle Chuck ranks 23rd on the Churchill Downs leaderboard with 20 points and would need a strong Travers showing to ensure a place in the expected 20-horse Derby field. The Travers offers qualifying points to the top four finishers on a 100-40-20-10 basis.

Baffert does not necessarily take baby steps with his finest stock.

Arrogate, unraced at 2, was coming off an allowance victory at Del Mar when he made his fifth career start in the Travers and made it a race to remember. He set a track record of 1:59.36 in the 1 1/4-mile contest while demolishing his competition by 13 1/2 lengths in one of the great performances in the history of iconic Saratoga Race Course.

Justify, also unraced at 2, captured the Santa Anita Derby (G1) in his third career start and his first crack at graded-stakes competition. That served as a perfect steppingstone for a sterling effort in the Kentucky Derby. He went on to give Baffert his second Triple Crown champion in four years after American Pharoah (2015).

Baffert has compared Uncle Chuck to Arrogate in the way he swallows up ground. The youngster made an auspicious first start in a one-mile race at Santa Anita that he commanded by seven lengths despite breaking a step slow. He rolled by four lengths against Thousand Words in the July 4 Los Alamitos Derby (G3) at a mile and an eighth.

Uncle Chuck showed there is plenty more in the tank when he drilled four furlongs in 47.60 nine days after the Los Alamitos Derby. The work ranked third of 57 horses covering the distance that morning at Del Mar.

There are several negative aspects to sending the prized prospect into the deep waters of the Travers. Tiz the Law, clearly the leading 3-year-old after his rousing June 20 Belmont Stakes score, is targeting that race. Uncle Chuck would have to ship across the country from his Del Mar base, and then there would be a rather swift four-week turnaround until the Derby if he accrues enough points to make the cut.

“If it should knock him out,” he said, “we can always go in the Preakness.”

UNCLE CHUCK is much the best in the Los Alamitos Derby @LosAlRacing! @luissaezpty on the mount for Trainer Bob Baffert & Owners Pegram, Watson or Weitman.