Baffert is impressed with a Ky. Derby hopeful that is not his 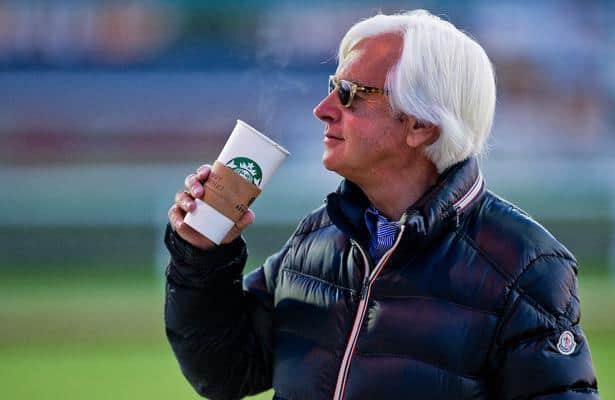 With his six Kentucky Derby victories and being the only living trainer who has saddled two Triple Crown champions, Hall of Famer Bob Baffert is not easily impressed. So when he offered the equivalent of a social-media “wow” about a rival horse last weekend, a raised eyebrow was in order.

“I was very impressed with John Sadler’s horse Rock Your World,” Baffert said in an interview at Santa Anita for Friday’s VSiN racing podcast. “He just kept galloping out. That was pretty impressive.”

It was not only Rock Your World’s seamless move from turf to dirt that left Baffert’s colt Medina Spirit 4 1/4 lengths in his wake last Saturday in the Santa Anita Derby (G1). It was how he looked doing it.

“He just ran away from us, and he went fast, and he just kept getting faster and faster,” Baffert said. “I love those kind of big-jumping, well-bred horses. He’ll go a mile-and-a-half.”

As he looked forward to sending Concert Tour and Hozier into Saturday’s last major prep, the Arkansas Derby (G1) at Oaklawn, Baffert was already being asked to survey the entire Kentucky Derby landscape. Rock Your World was not the only horse that earned his admiration.

“Essential Quality? He’s still impressive,” Baffert said. “He doesn’t lose, and I just love that in a horse. Known Agenda? I was pretty impressed with that horse. Big, solid horse.”

Where the horses out of California and Kentucky and Florida were grabbing his attention, Baffert threw shade on New York. Not so much on 72-1 Wood Memorial (G2) winner Bourbonic as on the slow times coming out of Aqueduct.

“That track must be really deep,” he said. “You can’t really base what goes on there. That’s not good racing.”

Baffert even felt Greatest Honour, now off the Triple Crown trail because of an ankle injury, was disadvantaged by Gulfstream Park’s main track when he lost to Known Agenda in the Florida Derby.

“He was against it there,” he said. “He was down inside when he could have been outside. At a lot of these tracks they break to go to the lead. They keep going, but they can’t finish. These deep, loose, sandy racetracks, it’s hard to finish. They can finish in the Derby.”

Conversely, Baffert said Oaklawn has the kind of track that plays a lot like Churchill Downs. That and the relatively short 2 1/2-hour flight from California are the main reasons he likes to send some horses to prep there. As the even-money, morning-line favorite Saturday, Concert Tour is trying to follow the same path as American Pharoah six years ago by winning the Rebel (G2), the Arkansas Derby and then the Kentucky Derby.

“He has a lot of quality,” Baffert said. “With Concert Tour and Hozier, I think the distance is going to be good for them. A mile-and-an-eighth, that’s when the cream starts to come to the top. They start stretching out and separating themselves.”

Sizing up the probables for Louisville, Baffert said, “There’s a lot of speed this year in the Derby. It’s still wide open. It could be one of those Giacomo years. You never know.”

While Baffert was remembering the 50-1 long shot that won the 2005 Derby, he could not include former futures favorite Life Is Good in the context of this year’s Run for the Roses. His undefeated colt was laid up last month by a small chip in his left hind ankle that has since been repaired.

“Everything went well with the surgery,” Baffert said. “(Doctors) are talking about getting him back in training in 60 days, so we’ll see what happens.”

Even as he has managed his current 3-year-olds, Baffert has also taken time to advise clients on buying horses that could be Derby prospects next year. Late last month he spent a day in Florida at the Fasig-Tipton Gulfstream Sale.

“We ended up with two nice 2-year-olds,” he said. “A little Nyquist colt and a Gun Runner colt. They worked really well. They came back. They’re here with me at Santa Anita. So far everything looks good with them.”

The Nyquist colt is out of the Malibu Moon mare Spirit of the Dawn and went for $900,000 to Spendthrift Farm and West Point Thoroughbreds. The Gun Runner colt is out of the Flatter mare Needmore Flattery and was sold for $1.7 million to bloodstock agent Gary Young.

That is the future. In the present, getting ready for the Kentucky Derby is priority one. A top-three finish at Oaklawn on Saturday would allow Hozier to join Concert Tour and Medina Spirit at Churchill Downs.

“Right now it’s on to Arkansas,” Baffert said. “Hopefully we get a couple more in.”