Baffert horses might yet have value in 2022 Kentucky Derby 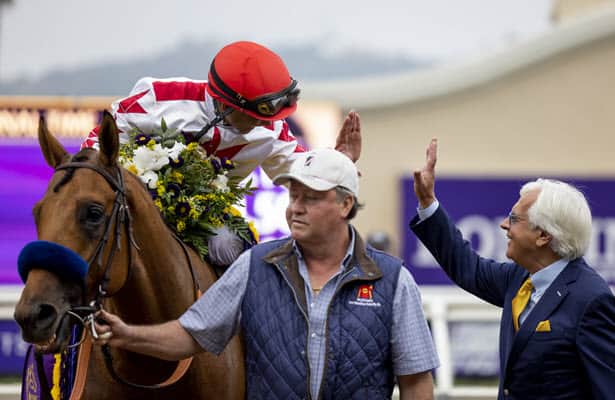 Even if Bob Baffert and his horses are persona and equos non grata at Churchill Downs, bettors still have the opportunity to bet that a soon-to-be 3-year-old from his stable will win the 2022 Kentucky Derby. There are even signs of value in some of his colts.

That does not include Corniche. Seven weeks since his victory in the Breeders’ Cup Juvenile, his best Derby futures price has drifted to 11-1 at Circa Sports, which opened him early this month at 9-1. He is still 6-1 at Caesars Sportsbook at William Hill, where he was posted first at 15-1 a month before the Breeders’ Cup.

Baffert had 10 of his 2-year-olds on that first futures sheet, which listed 127 horses, including three of the top five choices. Now, with about twice as many names available from the two Nevada bookmakers, there are 15 Bafferts carrying odds ranging from Corniche in the favorite’s role to Barossa and Rhetoric, each at 200-1.

Las Vegas odds: See the 259 horses in the Derby futures.

Now for the perfunctory disclaimer. Baffert and his horses are not welcome at Churchill Downs. The track banned them through May 2023. That was because the late Medina Spirit tested positive for betamethasone after winning the 2021 Derby, leaving that victory open to a possible disqualification. Anyone making a futures bet on a Baffert horse is counting on a change of heart from Churchill Downs, a court order or, more likely, a transfer of that horse to another trainer.

With that warning label posted, here are the 15 Baffert colts who are in the Nevada futures:

Corniche (11-1 Circa, 6-1 Caesars at William Hill), by Quality Road. His 3-for-3 record comes with two Grade 1 victories – the American Pharoah and the Breeders’ Cup. He got a 98 Beyer Speed Figure for his debut win. Barring a wave of protest by voters, he will be the champion 2-year-old male of 2021.

Messier (35-1, 20-1), by Empire Maker. For the first mile, he looked like a winner this month in the Los Alamitos Futurity (G2). The only problem was he had to go another 110 yards. That runner-up result marked the first time since the race was moved from Hollywood Park eight years ago that Baffert lost.

Doppelgänger (60-1, 35-1), by Into Mischief. As a 1-2 favorite, his debut began with a bump at the start. Then he showed he was much the best in the race that came a half-hour before the Los Al Futurity. That three-length victory over six furlongs earned this $575,000 yearling an 80 Beyer.

Rockefeller (85-1, 65-1), by Medaglia d’Oro. He finished fourth as the second choice in the American Pharoah. Then this $750,000 yearling bounced back last month in a one-turn mile at Belmont Park, leading from gate to wire to win the Nashua (G3).

Murray (100-1, 75-1), by Street Sense. After a geared-down, 10 3/4-length win in his first start during the summer, he was made the 3-5 favorite for the seven-furlong Del Mar Futurity (G1). Knocked off stride with a bump in the stretch, he finished fifth, losing by 10 lengths. Other than an October gate work, he has been on the shelf since.

Pinehurst (100-1, 100-1), by Twirling Candy. He was the “other” Baffert in the Del Mar Futurity. He ended up the victorious 4-1 second choice. Carrying a 2-for-2 record into the Breeders’ Cup Juvenile, he was no match for his stablemate Corniche, fading to finish fifth as the 6-1 third choice. Now he is a far cry from his 25-1 opening odds.

Newgrange (125-1, 100-1), by Violence. In a challenging maiden sprint Nov. 28 at Del Mar, John Velázquez took him between rivals in the turn on the way to a 1 1/2-length score. Baffert appears to be gradually tightening him in workouts. He worked 1:00.4 on Saturday going five furlongs in tandem with stablemate Winning Map.

Winning Map (125-1, 100-1), by Liam’s Map. If this $525,000 colt works with Newgrange, it seems appropriate that his odds are the same. He regressed from his 4 1/4-length maiden score in October, finishing a distant third of the four horses in the Bob Hope (G3) sprint last month at Del Mar. His futures price opened at 35-1 in October.

Gold Rush Candy (125-1 Caesars at William Hill), by Danzing Candy. He broke his maiden on his second try during the Del Mar summer, but he has been on the bench for the four months since.

Flying Drummer (150-1, 125-1), by Gun Runner. The most telling result for this 0-for-3 maiden was his runner-up finish Aug. 27 in a two-turn mile at Del Mar. As the 4-5 favorite, this $850,000 colt held the lead until the eighth pole. Then he was passed by Oviatt Class, whose victory marked his coming of age among horseplayers.

Enbarr (175-1, 125-1), by Brody’s Cause. He drifted out in the stretch of his Aug. 1 debut, losing by a half-length to stablemate Pinehurst. Even though he won next out Sept. 18 in the Capote Stakes at Los Al, he actually regressed in his speed optics. After eight straight weeks on the work tab, he has been rested this month.

Montebello (175-1, 150-1), by Curlin. He finished second to Enbarr in the Capote, giving him back-to-back runner-up finishes in black-type stakes after winning his first start at Del Mar. Last week he had his first workout since Thanksgiving weekend.

Barossa (200-1, 150-1), by Into Mischief. His long futures odds appear to be good value, especially considering his $775,000 yearling price. But bettors have never really taken a shine to this colt. The only time he was favored, he won, and that was on his third try to break his maiden. Most recently he was third in the Los Al Futurity.

Most of these horses may be candidates for graded stakes next month at Santa Anita, with one or more likely to be in the Sham (G3) on Jan. 1, even if they are not allowed to collect their qualifying points.

It is worth noting that the last two Derby winners – Authentic and Medina Spirit – made their 3-year-old debuts in the Sham. They were among the seven Baffert horses to wear the roses at Churchill Downs.

Even if Baffert and his stable are not directly represented in Louisville on May 7, horseplayers would be wise to pay attention to his horses beforehand, especially if they perform well enough to be moved elsewhere in time to run for the roses.