Baffert goes against the norm with Arabian Knight in Southwest 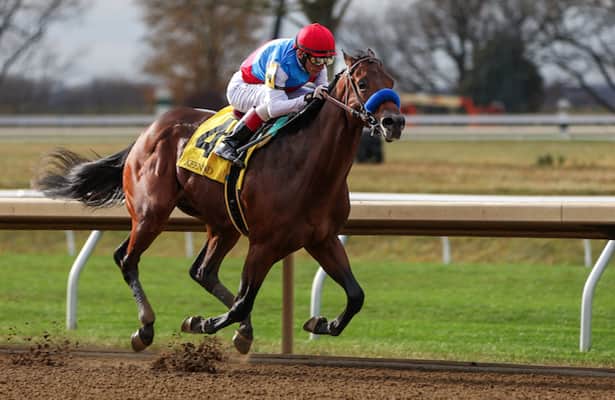 Hall of Fame trainer Bob Baffert went against the norm with his first career Oaklawn starter, running a filly, Arches of Gold, against males in the Grade 3 Count Fleet Sprint Handicap for older horses in 1993.

Almost 30 years later, Baffert will go against the norm again at Oaklawn when he starts dazzling Keeneland debut winner Arabian Knight in Saturday’s $750,000 Southwest Stakes (G3) for 3-year-olds at 1 1/16 miles.

The Southern California-based Arabian Knight will be making only his second career start and first around two turns in the Southwest, a race Baffert has won a record-tying five times, including last year with Newgrange. Arabian Knight, the even-money program favorite, is the most lightly raced horse Baffert has brought to Oaklawn for a Kentucky Derby prep, a series he’s dominated for more than a decade.

“It’s ideal to give them two races short and then stretch them out,” Baffert said Monday afternoon. “But the way the timing is for him, he’s doing really well right now, sometimes you have to trust your quarterback that he can throw the long ball. I think his athleticism sometimes makes up for a lot of it. If you’re going to stretch them out, let’s run him with some nice horses and see how he can handle adversity and stuff.”

The Southwest is Oaklawn’s second of four Kentucky Derby points races, a series that continues with the Rebel Stakes (G2) at 1 1/16 miles Feb. 25 and the Arkansas Derby (G1) at 1 1/8 miles April 1. The Southwest will offer 40 points (20-8-6-4-2) to the top five finishers toward starting eligibility for the Kentucky Derby.

Arabian Knight is ineligible for Southwest qualifying points because of Baffert’s two-year suspension by Churchill Downs, stemming from his Medina Spirit being disqualified from a 2021 Kentucky Derby victory because of a medication violation. The case is under appeal.

Zedan Racing Stables campaigns Arabian Knight after purchasing the son of champion Uncle Mo for a sale-topping $2.3 million at the Ocala Breeders’ Sales spring sale of 2-year-olds in training. Arabian Knight rocketed an eighth of a mile (9 4/5 seconds) in his preview work over the synthetic surface, the co-second-fastest work of the sale.

Arabian Knight, as a heavy favorite, backed up his OBS form with a front-running 7 1/4-length victory on the Breeders’ Cup undercard Nov. 5 at Keeneland. Racing over a fast main track, Arabian Knight covered seven furlongs in 1:21.98 to generate an eye-catching 97 Beyer Speed Figure.

“As a 2-year-old in training he did cost $2.3 million, so he went pretty fast,” Baffert said. “It was pretty obvious. But a lot of times they’ll work fast and they just don’t duplicate it on the dirt. You just don’t know how they’re going to do, but I think he’s progressed.”

Uncle Mo is by the Baffert-trained Indian Charlie, whose only career loss was a third-place finish in the 1998 Kentucky Derby. Baffert still won the race with Real Quiet.

About seven hours after Arabian Knight broke his maiden, Flightline cemented his 2022 horse of the year title with a runaway victory in the Breeders’ Cup Classic (G1) at 1 1/4 miles.

Baffert said he decided not to rush Arabian Knight after the Keeneland victory and brought him up to his 3-year-old debut off workouts, eight at Santa Anita since Nov. 28. Baffert said he chose the Southwest over the San Vicente Stakes (G2) at seven furlongs Sunday at Santa Anita.

“Shipping and running,” Baffert said. “If he runs well, if the distance isn’t too much for him, if he gets tired – we’ll sort of see where we stand with him. We’ll find out how he stacks up against these. It’s a good field. It’s always tough at Oaklawn. The weather looks good. That’s a big factor.”

Temperatures are expected to approach 50 degrees Saturday afternoon with a 20 percent chance of rain, according to the National Weather Service.

Baffert is seeking his record-extending 19th victory overall in Oaklawn’s series of Kentucky Derby points races. He’s had 40 starters. Seven horses made their third lifetime start in one of the races, including Newgrange in the Southwest. Baffert won the Smarty Jones Stakes at one mile – Oaklawn’s first Kentucky Derby points race – in 2018 with Mourinho. Baffert also won the Southwest in 2010 (Conveyance), split runnings in 2012 (Castaway and Secret Circle) and in 2013 (Super Ninety Nine). He’s won the Rebel a record eight times and the Arkansas Derby four times.

The gold standard for Baffert’s immense 3-year-old success at Oaklawn remains, of course, American Pharoah, who opened his 2015 horse of the year and Triple Crown campaign by sweeping the Rebel and the Arkansas Derby.

American Pharoah won the Rebel off a 5 1/2-month layoff. But he had three starts at 2, including a victory in the $300,000 FrontRunner Stakes (G1) at 1 1/16 miles at Santa Anita. American Pharoah then was scheduled to run five weeks later in the Breeders’ Cup Juvenile at Santa Anita but was scratched because of a foot bruise. Arabian Knight’s downtime is shorter, approaching three months, but he’s skipping his first allowance condition in his first route attempt.

“He ran such a big effort that when they run a big effort like that, it’s good to give them a little time in between,” Baffert said. “You just want to keep their mind right. He has a good mind. I think the second race is probably the most important, to see if they can handle everything. I’ve had them win first out and really struggle the second out. He’s had enough time and he’s worked. I would rather run him than train him. Basically, I had to train American Pharoah up to the Rebel. Different situation. We don’t know how good he is yet, so this is going to be a good test for him.”