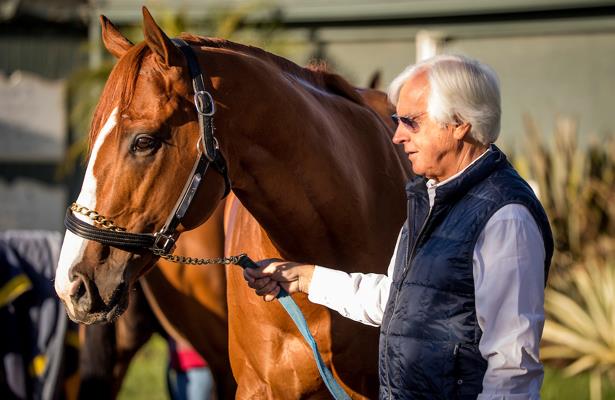 Bob Baffert was back on the beat at Santa Anita Park's Clockers’ Corner Saturday morning, fewer than 48 hours after his undefeated Triple Crown winner Justify was named the 2018 Horse of the Year.

“He’ll go down among a very elite group of horses,” Baffert said of the son of Scat Daddy, who numbered the Santa Anita Derby among his six career victories that included the Triple Crown sweep before his retirement.

“I’m happy for the connections and happy for the horse. I’ve been around a lot of talented horses, and he’s one of the best that I’ve trained. What he did was pretty incredible, in that short period of time."

Of course, Justify's career began with a 9 1/2-length maiden win at Santa Anita on Feb. 18 and concluded with his front-running Belmont Stakes triumph by 1 3/4 lengths on June 9.

In retrospect, however, Justify’s accomplishment did not shock Baffert.

“We knew before he ran he was something special, but they have to prove it in the afternoon,” he said. “After he won his second out (in a 6 1/2-length allowance score March 11 on a muddy track at Santa Anita), I knew right then.

“I kept telling myself, ‘Don’t mess it up, Bob,’ and I was fortunate everything worked.”

Meanwhile, McKinzie, heralded as the Kentucky Derby favorite before he was injured and Justify came along, is scheduled to head a talented field in next weekend's Grade 2 San Pasqual Stakes, a steppingstone to the Grade 1 Santa Anita Handicap on March 9.

The son of Street Sense is likely to breeze Sunday morning. Mike Smith would have the mount in the San Pasqual, for older horses at 1 1/8 miles. Other candidates include Battle of Midway (Flavien Prat) and Giant Expectations (Joel Rosario).