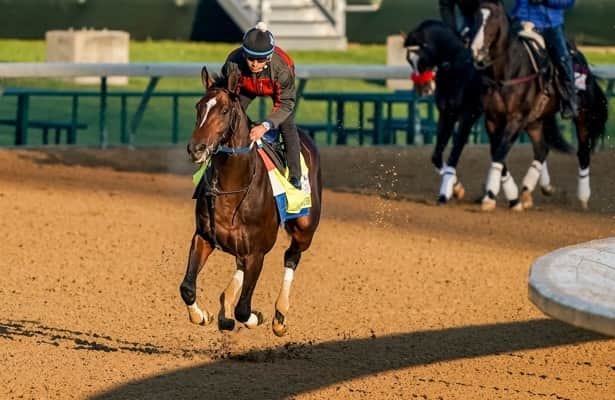 The field for the $1 million Preakness Stakes will include the Kentucky Derby winner Medina Spirit and his stablemate Concert Tour. The pair of Bob Baffert 3-year-olds will give the Hall of Fame trainer the chance to win the Preakness for a record eighth time.

Get Preakness Full-Card Picks from HRN

Baffert has a remarkable record with his Kentucky Derby winners coming back to also get a victory in the second jewel of the Triple Crown. Six times Baffert’s Derby winners ran back in the Preakness and five of them won. Authentic is the only exception and that happened in last year's modified Triple Crown schedule.

Here is an analysis of the Preakness field with the official Pimlico morning line. The Preakness is carded as race 13 out of 14 on Saturday with post time scheduled for 6:47 p.m. EDT.

1. Ram (30-1 – American Pharoah – D. Wayne Lukas / Ricardo Santana Jr. – 4: 1-1-1 - $107,380) His Hall of Fame trainer D. Wayne Lukas loves running in the Preakness, a race he has won five times, most recently in 2013 with Oxbow. Ram won his last two starts: a $50,000 maiden claiming score at Oaklawn Park and then an allowance victory at Churchill Downs going a one-turn mile on the Kentucky Derby undercard. This will be his first try in a stakes race. Toss.

2. Keepmeinmind (15-1 – Laoban – Robertino Diodoro / David Cohen – 7: 1-2-1 - $424,987) This colt's 3-year-old season has been a stark contrast to his juvenile campaign. Last year, he was in contention in all four starts including a win in the Kentucky Jockey Club (G2). This year in three races, Keepmeinmind has not been a threat to win or even hit the board. In the Derby, he was last early, made up some ground, and then passed tired horses without really gaining ground on the top three. Toss.

3. Medina Spirit (9-5 – Protonico – Bob Baffert / John Velazquez – 6: 3-3-0 - $2,175,200) Medina Spirit moved from being heralded as the gritty competitor who gave trainer Bob Baffert his record seventh Kentucky Derby victory to having his win tainted by a positive drug test for the therapeutic medication betamethasone. How this will play out in the running of the Preakness is impossible to predict. Baffert has a tremendous record with his Derby winners returning to victory in the Preakness. Medina Spirit has never run worse than second in his six starts and all three of those place finishes happened when he was not on the lead in the early going. Regardless of who else is in the field, Medina Spirit will try to control the race on the front end. Win Contender.

4. Crowded Trade (10-1 – More Than Ready – Chad Brown / Javier Castellano – 3: 1-1-1 - $179,000) Crowded Trade will try the Preakness with only three career starts which includes a debut maiden victory, a nose loss in the Gotham (G3), and then a third in the Wood Memorial (G2). The horses that came from the New York Derby preps did not perform well two weeks ago at Churchill Downs. Trainer Chad Brown won the second leg of the Triple Crown in 2017 with Cloud Computing. Use underneath.

5. Midnight Bourbon (5-1 – Tiznow – Steve Asmussen / Irad Ortiz Jr. – 8: 2-2-3 - $461,420) Midnight Bourbon ran in only graded-stakes races since he broke his maiden last summer at Ellis Park. Unlike the Kentucky Derby, where he is winless, trainer Steve Asmussen won the Preakness twice with the filly Rachel Alexandra in 2009 and two years prior with Curlin. Midnight Bourbon’s only finish outside of the top three was his sixth in the Derby, when he got bumped back to 12th in the early going. Typically, he prefers to be pressing the early pace.  He will be a clear third betting choice behind the Baffert runners. Top Choice.

6. Rombauer (12-1 – Twirling Candy – Michael McCarthy / Flavien Prat – 4: 1-1-1 - $107,380) Rombauer brings an interesting six-race career with a win on the turf to start his career, a victory on the artificial surface at Golden Gate in the El Camino Real Derby, and a second and a third in graded stakes on the dirt. Trainer Michael McCarthy skipped the Run for the Roses because the El Camino Real victory got Rombauer an all-expense paid spot in the Preakness. His preferred running style is that of a closer. Live longshot.

8. Unbridled Honor (15-1 – Honor Code – Todd Pletcher / Luis Saez – 4: 1-1-1 - $107,380) Trainer Todd Pletcher has yet to win the Preakness, but the second leg of the Triple Crown has never been a high priority for him. He usually skips this race with his Kentucky Derby runners, unless they were the winner, and aims for the Belmont Stakes. Unbridled Honor broke his maiden at Tampa Bay Downs and then was fourth in the Tampa Derby. Most recently, he was second in the Lexington (G3) behind King Fury. That April 10 race made the Preakness an ideal spot for the son of Honor Code. Live Longshot.

9. Risk Taking (15-1 – Medaglia d’Oro – Chad Brown / Jose Ortiz – 5: 2-0-0 - $200,030) Risk Taking was an impressive winner of two starts at Aqueduct after trainer Chad Brown added blinkers for his maiden score and the Withers (G3) in February. He was a disappointing seventh in the Wood Memorial (G2) which dashed his Kentucky Derby hopes. He did his best running from off the pace and has a chance to hit the board in the Preakness. Use underneath.

10. Concert Tour (5-2 – Street Sense – Bob Baffert / Mike Smith – 4: 3-0-1 - $856,600) Concert Tour entered the Arkansas Derby (G1) with an unbeaten record that included the San Vicente (G2) and the Rebel (G2). In the Arkansas Derby, he had the lead in the stretch but then got run down by Super Stock and Caddo River. Baffert and owners Gary and Mary West opted to pass on the Run for the Roses for a variety of reasons and now the son of Street Sense returns for the Preakness. Concert Tour has two front-end victories and the other was a stalking trip in the San Vicente. Win contender.

Summary: Baffert's record in the Preakness is impeccable and the favored duo of Medina Spirit and Concert Tour appear hard to beat when you look at their performance on the racetrack.

However, they both do their best running on the front-end. That combined with the turmoil that has been swirling around the Baffert barn could make them both vulnerable.

Thus, I made Midnight Bourbon my top choice expecting better odds and a cozy stalking trip.