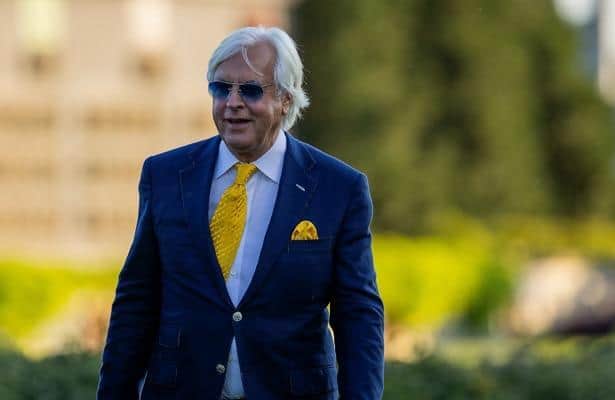 Trainer Bob Baffert confirmed Thursday that a hearing has been scheduled with the Kentucky Horse Commission on Feb. 7 to hear Medina Spirit’s Kentucky Derby betamethasone case. The confirmation came during the trainer’s hearing to help determine whether he will be suspended by the New York Racing Association.

The KHRC did not immediately respond to a request for confirmation by Horse Racing Nation.

The confirmation from Baffert came when he was asked a question by NYRA attorney Henry Greenberg during a hearing in New York. The trainer said he was notified of the date from Clark Brewster, one of the trainer’s attorneys.

"They haven't dismissed the charge, there is a hearing Feb. 7," Greenberg said during the hearing.

It was not specified from Baffert or Greenberg as to whether the hearing is with the entire KHRC or just the state stewards.

Medina Spirit, who died after a workout at Santa Anita in December, tested positive for betamethasone following the Kentucky Derby on May 1. Baffert and his attorneys have claimed that the positive was due to use of a topical cream called Otomax, as opposed to an injection of the medication.

Baffert took the KHRC to court in Kentucky to force further testing of the colt’s split-sample urine, and his attorneys have said the results support the cream being the culprit.

The trainer testified during the fourth day of his NYRA hearing. That hearing will continue on Friday in Manhattan with closing statements.