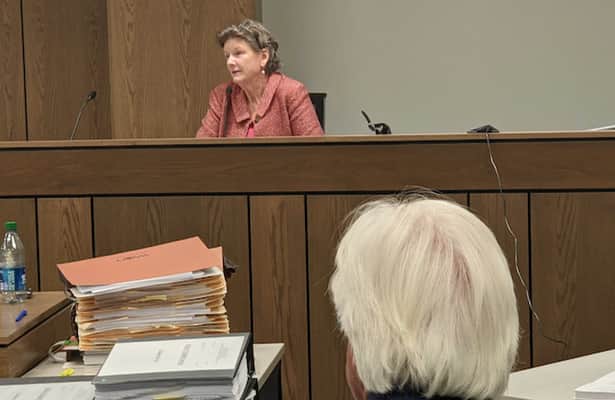 In the most contentious testimony of the week, one of racing’s most prominent veterinarians returned serve Thursday on a powerful barrage of questions from an attorney for trainer Bob Baffert, who is trying to clear his name and get Medina Spirit restored as the winner of the 2021 Kentucky Derby.

Dr. Mary Scollay, the head of the Racing Medication and Testing Consortium, stood her ground on matters ranging from the debate over the proper use of the drug that got Medina Spirit suspended to her lack of experience as a hands-on veterinarian at racetrack stables.

Called as a witness for the Kentucky Horse Racing Commission, Scollay set the table when she told attorney Luke Morgan that the skin ointment Baffert’s team gave Medina Spirit last year was not intended for horses.

“Otomax is FDA-approved for use in dogs to treat ear infections,” Scollay said. “I would hesitate to describe Medina Spirit as a dog. That would be most unfair.”

Baffert’s legal team said Otomax was applied to Medina Spirit twice a day in the three weeks leading up to the 2021 Derby. Baffert’s case was built in part on the belief that the betamethasone in that ointment was a type that should be allowed under Kentucky regulations as opposed to the injected form that is illegal.

Scollay went on to say there was no written record provided by Baffert’s veterinarian Dr. Vince Baker as to why Medina Spirit was given a total of 1 1/2 tubes of Otomax or how often.

“There’s no evidence here that the horse had an ear infection to warrant the use of this,” she said. “The veterinary-practice act requires you to keep records.”

On cross-examination, Baffert attorney Clark Brewster jumped in with both feet.

“Dr. Baker not only documented the day he did anything to Medina Spirit or any other horse,” Brewster said, “he also documented it by uploading it to The Jockey Club. So he was transparent. Did you look at The Jockey Club data?”

“If you’re going to be critical of his records,” Brewster said, “it might be something that you might want to get access to and look at.”

“It was my understanding that he was requested to provide all the medical records that he had,” Scollay said, “and this was all he had.”

“This,” according to Scollay, was a record that showed the number of Otomax applications but not the amount of the dosages or the reason.

Then Scollay doubled down.

“I’m familiar with The Jockey Club system,” she said. “It does not equate with medical records. It is comparable to the confidentials where treatments are recorded. Specific diagnostic procedures may be reported, but the results of those diagnostics are not recorded.”

In various ways, Brewster repeated the crux of Baffert’s appeal that has been heard by a hearing officer since Monday afternoon – and at other hearings in court and in front of the KHRC. That Kentucky medication regulations are “vague and ambiguous.”

During testimony Thursday morning, a New York laboratory that drug-tested Medina Spirit’s post-Derby samples had its credibility questioned by a University of Kentucky professor of equine veterinary science.

The analysis in dispute was a court-ordered test done last summer by Dr. George Maylin’s New York Equine Drug Testing and Research Laboratory. It was last fall when Maylin concluded that the drug found in Medina Spirit’s system was betamethasone valerate, an active ingredient in Otomax that Baffert’s team has contended was legal.

Stanley’s criticism of Maylin’s testing was the subject of debate by attorneys even before he testified Thursday.

“To go down the further road of (the KHRC) just trying to question and criticize Dr. Maylin’s report, … it’s irrelevant and just a complete waste of time,” said Craig Robertson, another one of Baffert’s lawyers.

KHRC lead lawyer Jennifer Wolsing begged to differ, saying “there is” a dispute over whether Medina Spirit was injected or given an ointment. Since the colt was said by the Baffert team to have gotten daily doses of Otomax, Wolsing wondered why there was no sign of betamethasone in the colt when he was tested April 18, 2021.

“We have some evidence to indicate there was some other route of administration, specifically an injection,” Wolsing said. “We did a barn search, and no Otomax was found.”

In addition to saying Wolsing had no proof of that, Robertson and Brewster asked why the KHRC suddenly was interested in the way the betamethasone showed up in Medina Spirit’s tests. The commission has been steadfast in building its case on the fact the drug was in the colt’s system, not how it got there.

“We are wasting time, your time, everybody’s time, going through additional experts challenging what Dr. Maylin found when he was agreed to by them,” Brewster said.

That was the case when Baffert and the KHRC agreed to have Maylin retest the Medina Spirit samples after Baffert won a court order in June 2021 to make that happen.

Baffert’s team contended the KHRC had yet to prove its belief Medina Spirit may have been injected with betamethasone.

After Stanley and before Scollay, the KHRC called for expert testimony from Dr. Benjamin Moeller, the University of California, Davis, associate professor who detailed the test last spring of Medina Spirit’s split blood sample in his lab.

Details of the very first test of Medina Spirit’s split sample has been conspicuous by their absence from testimony this week. But it was discussed behind closed doors.

Before Thursday’s testimony began, a person with knowledge of the 3 1/2-hour private session that consumed Wednesday afternoon told Horse Racing Nation it was closed to the public and media so lawyers could review concerns of Industrial Laboratories. Executives from the Colorado facility that did the first examination of Medina Spirit’s test sample in May 2021 were concerned that any evidence they might provide could reveal proprietary procedures to their competitors.

Amid what has been mostly dry, scientific testimony peppered by textbook lawyering, there was a moment that drew laughter at the end of a break Thursday afternoon.

Wolsing asked Brewster if it he would agree to the recording of a deposition in the coming days. Remembering that Baffert had a phone call with KHRC chief steward Barbara Borden secretly recorded last spring, Brewster replied, “Sure. You guys are good at that.”

Baffert, who testified on the first day, and his wife Jill attended every session of the hearing this week at a state office building in the capital city. Asked if he would be back when testimony resumes Monday, Baffert said, “I don’t know. I’ll have to talk to my lawyers.” Brewster, Robertson and Joe DeAngelis reserved the right to recall Baffert to the stand.

Frankfort-based attorney Clay Patrick, whose family is involved in the horse industry, is the hearing’s presiding officer. He ultimately will make a ruling that will be a non-binding recommendation, which the 14-member KHRC may accept, revise or reject.

Baffert is appealing a KHRC stewards ruling in February that disqualified the late Medina Spirit from his Derby victory and put Baffert on a 90-day suspension that came with a $7,500 fine. Baffert served the suspension that was recognized nationwide, returning to work July 3.