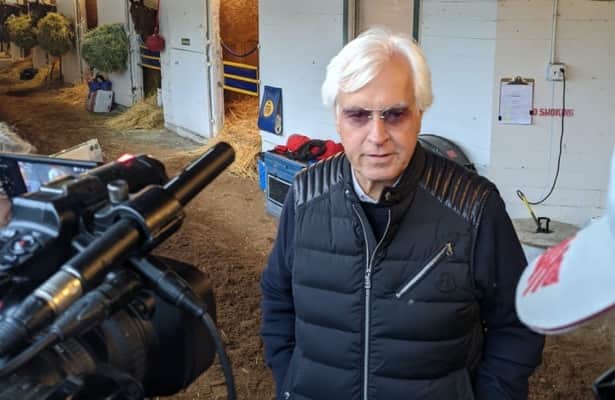 Medina Spirit’s first drug sample tested positive for an excessive trace of an anti-inflammatory drug after he won last Saturday’s Kentucky Derby, putting him on the verge of disqualification, fueling critics of trainer Bob Baffert and pushing the integrity of this year's Triple Crown into serious question.

Baffert, who faced formal medication scrutiny the year after Justify won the 2018 Triple Crown, confirmed the test Sunday morning at his Churchill Downs barn in the company of lawyer Craig Robertson. He also denied ever giving Medina Spirit betamethasone, a medication that is legal to a certain limit in Kentucky.

“I got the biggest gut punch in racing for something that I didn’t do,” Baffert said. “It’s a complete injustice, and I’m going to fight it tooth and nail.”

Social-media gossip swirled Saturday night about the failed test, leading to a palpable buzz around the Churchill Downs backside before Medina Spirit galloped and stablemate Concert Tour breezed in preparation for next Saturday’s Preakness Stakes at Baltimore.

Baffert said his assistant Jimmy Barnes was served with a Kentucky Horse Racing Commission notice that Medina Spirit had been found to have 21 picograms of betamethasone in his system, 11 picograms over the limit established by the KHRC. A picogram is a trillionth of a gram.

“We did not give it,” Baffert said. “Medina Spirit has never been treated with betamethasone.”

The Kentucky Horse Racing Commission did not publicly confirm the test results. Under KHRC rules, Medina Spirit could not be disqualified before a second test sample was evaluated.

Standing in a doorway of his barn that was just redecorated with new Derby victory signs, Baffert defended himself to reporters in a hastily arranged news conference that peppered by rain and occasional claps of thunder.

“I am not a conspiracy theorist,” Baffert said. “I know everybody is not out to get me, but there is definitely something wrong. Why is it happening to me? There’s problems in racing, but it’s not Bob Baffert.”

Although his Hall of Fame success has been brought into question through waves of social-media speculation, Baffert has come out a winner in recent high-profile drug investigations.

Related: How much can a few picograms do to a horse?

The California Horse Racing Board agreed with his conclusion that a jimson-weed positive for Justify after the 2018 Santa Anita Derby (G1) was the result of tainted feed.

He also successfully appealed the disqualifications of Gamine and Charlatan from victories last May at Oaklawn Park, both because of lidocaine positives that he said were not confined to his barn after he first suspected the source was a pain-relief patch worn by Barnes. Gamine’s win in an allowance race and Charlatan’s in one division of the Arkansas Derby (G1) were reinstated in an Arkansas Racing Commission hearing last month.

“I just feel like these last 18 months and what I’ve gone through is like all of us right here,” Baffert told reporters. “Imagine yourself going to work every day, and they tested you every day for these contamination levels, and they told you if you tested positive, you were going to be fired. That’s how I feel. I do not feel safe, and it’s getting worse. How do I move forward from this knowing something like this can happen.”

Related: Baffert has two of the fastest Preakness horses

Through the scrutiny that is bound to intensify in the coming days, Baffert said Sunday he is moving ahead with plans to race Medina Spirit and Concert Tour in the Preakness. They are scheduled to be vanned from Louisville on Monday to arrive before dawn Tuesday in Baltimore.

Kentucky Derby runner-up Mandaloun would stand to get the victory if Medina Spirit were disqualified. Asked if he would change his mind and send Mandaloun to the Preakness for a run at a provisional Triple Crown, trainer Brad Cox said no.