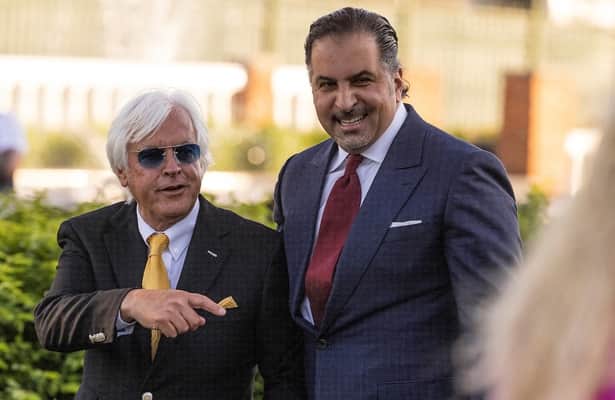 An attorney for trainer Bob Baffert has filed a memo in response to the New York Racing Association's arguments against granting Baffert a preliminary injunction that would halt NYRA's suspension of the Hall of Fame trainer.

The suspension in New York, instituted on May 17, came after Kentucky Derby winner Medina Spirit tested positive for betamethasone, a banned substance, in a post-race test. On June 14, Baffert filed suit against NYRA seeking a preliminary injunction against the suspension. It contends Baffert's rights to due process and the ability to participate in New York racing are being violated by the suspension.

The memo, filed Wednesday in U.S. District Court for the Eastern District of New York by attorney Craig Robertson, notes that NYRA does not claim Baffert violated any New York statute or racing rule, adding that he "has never even been accused of violating a New York rule and he has never faced discipline from either NYRA or the New York State Gaming Commission."

From there, it largely reiterates the claims made in the lawsuit, saying that "this motion can be decided on two purely legal grounds."

One is an argument that Baffert was not afforded due process before he was suspended by NYRA. "He was given no notice of any charges against him and no opportunity to be heard," the memo states. "Instead, he received a letter stating that he was immediately suspended and would not be permitted to race any horses in New York."

A hearing on the matter is scheduled for Monday.

The memo takes a few shots at NYRA, claiming that its suspension of Baffert was a "backdoor" measure to do "what it is statutorily prohibited from doing through the front."

And, it claims, "While NYRA sanctimoniously claims to be acting in the interest of the 'integrity of racing,' the fact that NYRA routinely allows onto its tracks trainers who have actually been found to have broken New York’s rules of racing completely shatters that false narrative."

Santa Anita opens stakes-filled fall meet on Friday
After a blockbuster summer at Del Mar, and a brief...