Baffert assistant Barnes gets his due with Justify's Triple Crown 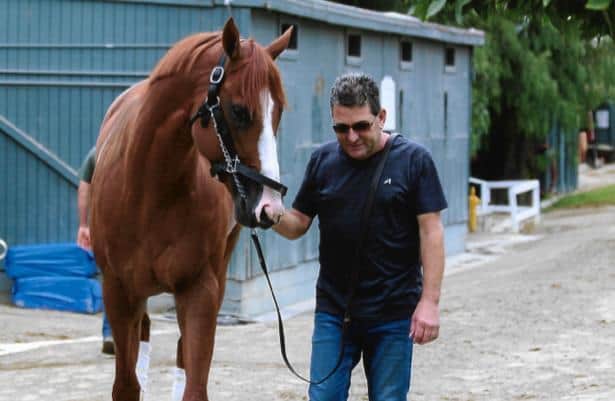 Appropriately, Bob Baffert was center stage during Justify’s Triple Crown sweep this spring, but on call in the wings, there was Jimmy Barnes, appropriately playing Jimmy Olsen to Baffert’s Clark Kent.

Justify handled the role of Superman just fine, thank you, giving Team Baffert its second Triple Crown triumph in four years on the fleet heels of American Pharoah in 2015, with one difference: perfection.

Justify was only the second horse to do it while unbeaten, joining Seattle Slew in 1977.

As fans at Santa Anita await the opportunity to see Justify in person Saturday when the big red colt will be on display between the fourth and fifth races, Baffert and his top sidekick will otherwise be keeping him at the ready for his next gig, wherever and whenever it may be.

Meantime, Baffert and Barnes are taking a welcome pause from the media mayhem to savor in earnest Justify’s momentous achievement while still taking care of business at their home base of Santa Anita.

“These two Triple Crown sweeps were pretty special,” said the 58-year-old Barnes, who has been with Baffert going on two decades now. “It’s an amazing feat to accomplish. Not many people thought it was going to happen again, and then we come up and win it within a three-year span.”

Barnes was not about to lobby on behalf of American Pharoah or Justify as to which is the better horse, opting for a more propitious moment, perhaps when Justify joins American Pharoah in retirement at stud.

“But as far as what makes them a good horse,” Barnes said, “three things are required: a good mind, a good set of lungs and a huge stride. The way those two horses covered the ground was amazing.

“You could spot them at any moment on the race track just by the way they were galloping. You’d know, ‘There they are.’ When they worked, you’d just go ‘whoa!’ and then look at your watch.”

Baffert is on record as saying Barnes loves what he does, won’t take time off even when mandated, and “lived with American Pharoah” during his Triple Crown pursuit.

Baffert recently said that if there was a Hall of Fame for assistants, Jim Barnes would be the first one in it.

“That was very kind of him,” Barnes said. “I really appreciate that. I’ve accomplished a lot and we’ve won a lot of big races in the 19 years I’ve worked with Bob.

“We do everything so well, but still, Triple Crowns are hard to win. Yet each and every year Bob seems to come up with stock that’s very competitive, and it’s a pleasure to train horses like that.

“They give you confidence. We went into the Triple Crown races with a bounce in our step. I was really confident with Justify before the Kentucky Derby, even though he’d only been running in five and six-horse fields.

“Here he is in a 20-horse field with more rain than they’ve ever had, and you’re going to pull this off and win it in only your fourth start?

“And then you’re going to go to Baltimore where it rains even harder and win the Preakness, with a fog so thick you can’t even see the race?

“I’m watching fractions and saying, ‘He’s moving right along, I know he’s up front.’ I was in the infield, and then here come his white silks through the fog. There were horses closing but he just did what he needed to do to win it.

“Finally, we get to go to New York and people are asking me, ‘What if it doesn’t rain?’ I said, ‘Wait till you see this horse on a dry track.’”

And that’s exactly what Justify’s fans will see on Saturday.