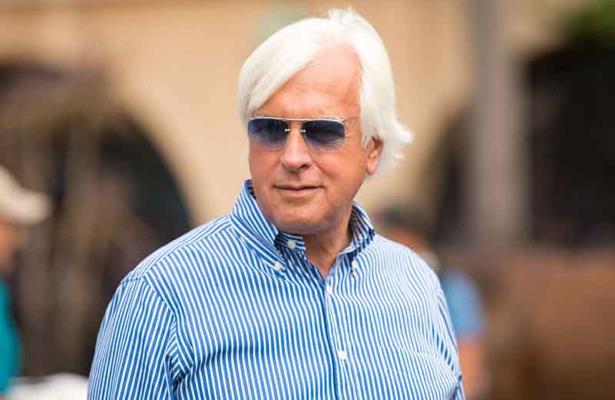 Winning a prestigious race takes the work of a team.

After Improbable's victory in Saturday's Grade 1, $750,000 Whitney, Hall of Fame trainer Bob Baffert said the assistant starter and the entire NYRA gate crew were his Most Valuable Players for settling his horse in the gate, allowing him to run his race and post a two-length score in the 1 1/8 mile contest for some of the top older horses in the country.

After rearing up once in the gate and acting fractious a second time, Improbable still managed to break sharp from post 2 in the five-horse field, which put him in a better position than even-money favorite Tom's d'Etat, who stumbled leaving the outermost post.

Improbable stayed off Mr. Buff's early fractions before taking command out of the final turn and repelling By My Standards' late bid to win his second consecutive Grade 1.

"You have to thank the gate crew, the guys they had in there with him. It's like being in the gate with a bull sometimes," Baffert said with a laugh. "He could have easily turned over, but they did a tremendous job, so I give them a big assist there because they did a great job."

Once away, Improbable showed top-class form under jockey Irad Ortiz, Jr., who captured his second Whitney in three years after also winning aboard Diversify in 2018.

"As much as he acts up in the gate, he always breaks really well," Baffert added. "He breaks like a shot. After that, Irad got him in a nice rhythm. He followed Mr. Buff on the lead and tightened him along there and turned for home. Improbable had been working so well down here at Del Mar. It was a big effort there."

Improbable won his third career Grade 1, joining the Los Alamitos Futurity in December 2018 as a juvenile. The son of City Zip competed in the Triple Crown trail last year but finished out of the money in four Grade 1s, placing fourth in the Kentucky Derby, running sixth in the Preakness and finishing fourth in the Pennsylvania Derby and fifth in the Breeders' Cup Dirt Mile.

In his 4-year-old campaign, he ran second in the Oaklawn Mile in his seasonal bow in April before capturing the Grade 1 Hollywood Gold Cup on June 6 going 1 ¼-miles at Santa Anita before earning a personal-best 106 Beyer Speed Figure for his Whitney win.

Owned by WinStar Farm, China Horse Club and SF Racing, Improbable improved to 6-3-0 in 13 career starts. Baffert said Elliott Walden, WinStar's CEO, said he had the Hollywood Gold Cup and then the Whitney route picked out for him.

"Elliott Walden does all my scouting and said this is where we need to run," Baffert said. "We were going to run at Oaklawn but decided to scratch him there and wait for the Gold Cup. It's a team effort."

The Whitney was just the second time Improbable won outside of California, with his second-start victory in the 2018 Street Sense at Churchill Downs marking the other.

"This is one of the few times he's won on the road, so that was a big effort," Baffert said. "It was nice that the WinStar group was there. I didn't know they had never won the Whitney before; they had won everything else, so it was exciting for them."

Baffert, who has won two Triple Crowns [American Pharoah in 2015 and Justify in 2018], has conditioned winners in almost every major race in the country. But until 2019, he had never trained a Whitney winner. After McKinzie won it last year and Improbable followed suit, Baffert became the first trainer to repeat in the Whitney since fellow Hall of Famer Scotty Schulhofer in 1994-95.

While Baffert has famously trained 3-year-olds, his stock of older horses this year continues to be strong, with Improbable part of a roster that also includes a still-racing McKinzie as well as Maximum Security.

"It's such a prestigious race, and to win it, it means a lot," Baffert said. "I'm lucky enough to train for some big outfits, and when you train for them, you get a lot more chances at it. I'm excited to train older horses, because they usually go to stallion duty because they've done so well so they aren't around for the extra year. Unfortunately, the COVID situation has taken away some opportunities to run them, but I just feel blessed and fortunate that I do have these horses."